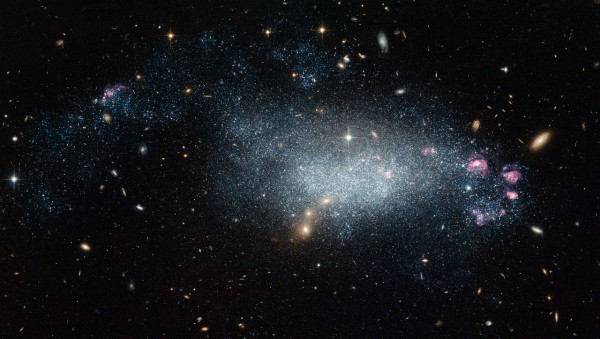 While today’s interstellar exploration technology has nothing on that of most science fiction films, astronomers are in no way blind to what’s happening in galaxies far, far away. In a paper published in Nature, astronomers reported how they witnessed the birth of a galaxy cluster, one of the most massive structures in the known universe.

A galaxy is composed of billions of stars – the Milky Way has at least 100 billion – and spans several thousand light years in diameter. A galaxy cluster is a group of galaxies held together by their own gravitation pull. Some clusters can have hundreds of individual galaxies, while others can have thousands.

The young galaxy cluster, also known as a protocluster, discussed in the paper only had 14, but during the astronomical survey in Antarctica that led to its discovery, it appeared as the brightest feature in the sky. Sometimes, massive gravitational forces can bend light and make certain heavenly bodies look brighter than they actually are, but the protocluster did not need this kind of assistance to become visible.

One of the more curious aspects of the protocluster was its star formation rate. The Milky Way produces several stars within a year. The protocluster was forming new stars at a rate 50 to 1,000 times faster than that, the authors estimated. (Related: Could 5,000 pencil-shaped robots help solve the mysteries of our universe?)

“More so than any other candidate discovered to date, this seems like we’re catching a cluster in the process of being assembled,” Chris Hayward, an associate research scientist at the Center for Computational Astrophysics at the Flatiron Institute in New York City and one of the co-authors, said. “This is the missing link in our understanding of how clusters form.”

Normally, the gravity exerted by the clusters draw in surrounding material, increasing their size and turning them into some of the most gargantuan features in the universe. This process was thought to occur over a very long time, but the recently discovered protocluster proved this assumption wrong.

Scott Chapman, an astrophysics professor at Dalhousie University in Halifax and co-author of the study, considered the entire process mysterious and intriguing all at the same time. “It just hit you in the face because all of a sudden there are all these galaxies there,” he said. “We went from three to 14 in one fell swoop. It instantly became obvious this was a very interesting, massive structure forming and not just a flash in the pan.”

The protocluster is about 12 billion light-years away, which, considering the speed of light, means the paper is discussing an event that has happened roughly 12 billion years ago. It is a rare opportunity for humans to observe the formation and development of a cluster, and perhaps, even unlock some of its mysteries.

For instance, clusters have been observed to have great amounts of superheated gas reaching up to one million degrees. Astronomers have always considered this a mystery, but the protocluster’s immensely fast star formation rate could be a vital piece in the puzzle. When stars form, they release hot gas and heat up their surroundings. Because the gas lacks the density to form new stars, they remain in various areas across the cluster, which explains the samples detected in the past.

The scientists estimate that at the stage they are observing, the protocluster contains as much mass as 10 trillion suns. Now, several billion years later, the individual parts of the cluster will have merged and become a single spiral shape surrounded by stars and smaller galaxies. By now, it will also most likely have over 1,000 suns’ worth of mass.

Learn more the stars, galaxies, and outer space at Cosmic.news.