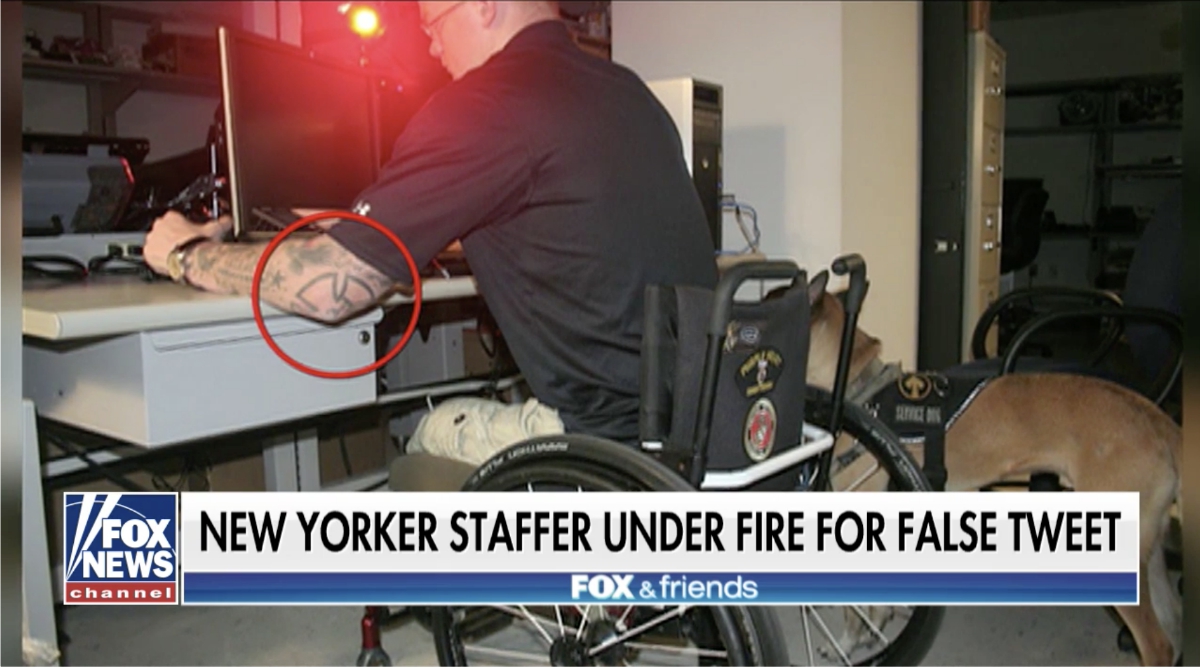 The unhinged Left-wing media has a new boogeyman (other than Donald Trump) they’re selling to their equally unhinged supporters: The Immigration and Customs Enforcement (ICE) agency.

The overwhelming majority of ICE agents are hard-working men and women doing their best to protect our country, our borders, and our citizens from criminal aliens. They work under difficult conditions and receive a ton of ire and angst because part of their job involves finding and arresting people in our country illegally — most of whom are minorities.

In its haste to paint their new boogeyman in the worst of light, the Left-wing media has abandoned all journalistic principles, including those requiring unbiased, fair, and accurate reporting.

As noted by The Daily Caller, a “fact checker” for New Yorker magazine resigned (was she forced out?) after incorrectly claiming that an ICE agent has a Nazi tattoo.

The news site noted that Talia Lavin who worked for the Leftist journal for three years left her job and then apologized to the agent, Justin Gaertner, via Twitter.

“To Justin Gaertner, I apologize, sincerely: all I saw in you was the photo ICE tweeted, and not the human being depicted inside it. It was uncharitable, and the hasty deletion doesn’t change that. I’m sorry and I have voluntarily resigned after three years at the New Yorker,” she wrote.

She noted that Gaertner had an “iron cross” tattoo on his arm, claiming it was synonymous with Nazi Germany. But the symbol predated Nazi German by decades; it was adopted by Imperial Germany.

And it wasn’t even an “iron cross,” so to speak.

Her apology stems from the backlash after she accused Gaertner, a combat-wounded Marine veteran and ICE forensic analyst, of being a Nazi sympathizer over a tattoo she perceived as being the “Iron Cross” used by Nazi Germany.

ICE strongly pushed back against the unfounded allegations, going as far as to demand the apology from Lavin for “baselessly slandering an American hero” and pointing it out that the tattoo on the veteran’s left elbow has nothing to do with Nazi Germany at all.

The symbol is “the ‘Titan 2,’” adopted by the platoon he fought with in Afghanistan. “The writing on his right arm is the Spartan Creed, which is about protecting family and children,” ICE noted further.

We’re not sure what’s more ridiculous: Getting this wrong because the “fact-checker” refused to, you know, check facts, or that she and the journalists she worked with actually believe that a federal law enforcement agency would hire a Nazi sympathizer or neo-Nazi adherent. (Related: Majority of Americans side with TRUMP on border wall, illegal immigration)

It’s possible that the government does have some of those people in its employ, but they darn sure aren’t being open about it.

Even during the Trump administration (because they’re all Nazis, says the disgustingly dishonest pretend media).

This gargantuan mistake comes the same week that Time magazine produced a cover that went viral depicting a crying migrant girl staring up at monstrous POTUS Trump, who appears to be looking down on her dispassionately, as a critique of his child separation policy.

Time’s cover headline with the photo: “Welcome to America.”

Only, the photo was a complete fabrication. A purposeful lie meant to incite anger and resentment at the Trump administration.

The little girl depicted — a two-year-old from Honduras — was never separated from her mother, who had run away with her leaving her husband and other children behind.

Moreover, the mother had been caught trying to sneak into the U.S. in 2013 and deported. So she is a repeat offender.

The fake news media has a vendetta against POTUS Trump and his supporters. That becomes obvious when even basic journalistic practices are discarded.

Read more about the fake news media cartel at FactCheck.news.