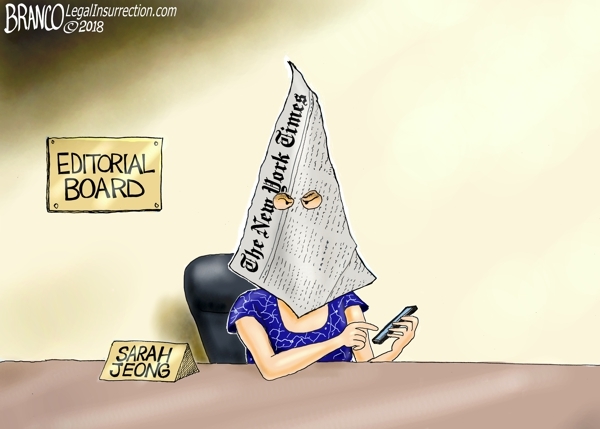 A feature writer at The New York Times (NYT) has issued an apology for some statements she made on Twitter that may have been offensive.

No, it wasn’t Sarah Jeong, the infamous white-hating bigot whom the NYT recently hired to its editorial board, who suddenly decided to repent of her racist sins. It was actually Elizabeth Williamson, a colleague of Jeong’s at the NYT, who for some reason felt the need to apologize for calling Jeong out for being a racist.

Williamson had earlier tweeted out a link to an editorial written by another NYT employee, opinion columnist Bret Stephens, who chastised his employer for not only hiring an openly racist individual, but also defending her racism by blaming it on the white people she hates.

“I’ve seen some acrobatic efforts to explain why Jeong’s tweets should be treated as ‘quasi-satirical,’ hyperbolical and a function of ‘social context,'” Stephens wrote, declaring that Jeong’s past tweets are, in fact, racist.

“But the criterion for racism is either objective or it’s meaningless: If liberals get to decide for themselves who is or isn’t a racist according to their political lights, conservatives will be within their rights to ignore them.”

Stephens’ full editorial on the subject is definitely worth a read, and Elizabeth Williamson clearly feels the same.

“Here’s @BretStephensNYT offering a classy welcome to a colleague who has yet to prove she deserves one,” Williamson tweeted in support of Stephens, and in clear condemnation of Jeong’s hiring.

As long as you’re not white and male, you can say anything you want without repercussions or punishment

But not long after tweeting this, Williamson, for whatever reason, decided to backtrack. She deleted the tweet and posted another one apologizing to the public for calling a spade a spade by implicating Sarah Jeong as a white-hating racist.

“I just deleted my earlier tweet about this column. It was inappropriate. I apologize,” Williamson wrote in this follow-up tweet.

It’s unclear which portions of Williamson’s now-deleted tweet she felt “inappropriate,” considering the litany of hateful, violent, and even genocidal tweets that Jeong shamelessly posted over the course of at least four years.

“It’s unclear whether the Times pressured Williamson to apologize, or whether she caved to the baying of the Twitter outrage mob,” wrote Ben Shapiro for The Daily Wire, commenting on the saga.

“In any case, the irony of an apology from someone criticizing Jeong but not Jeong herself is telling evidence of the perverse mentality of the Times itself.” (See Journalism.news for more coverage of the bizarre status of modern journalism.)

Remember when Kevin Williamson was fired from the National Review for tweeting about the evils of abortion?

A prominent case-in-point that illustrates the free speech double standard in modern-day America depending on your skin color and political leanings is the past firing of Kevin Williamson from the National Review. Stephens addresses this in his opinion column, making some excellent points about how Jeong is basically an untouchable since she’s female, non-white, and liberal.

“Williamson had written a short tweet in which he seemed to suggest that women who obtain abortions should be hanged,” Stephens writes. “Though he insists this is far from his real view, his fate was sealed when it turned out he had said something similar in a podcast. He was fired almost immediately.”

If Sarah Jeong was a white male who tweeted the exact same things using “black” or “Jew” instead of “white,” she not only never would have been hired by the NYT, but she probably would have been blacklisted and had her entire career ruined – and been declared by the Southern Poverty Law Center (SPLC) to be a domestic terrorist.

That’s really the crux of the issue here: the fact that so-called “privileged” white people, and especially white males, are the only group of people in America today who are being deprived of their free speech rights via political correctness.

To keep up with the latest news on the white-hating, racist left, visit LiberalMob.com.