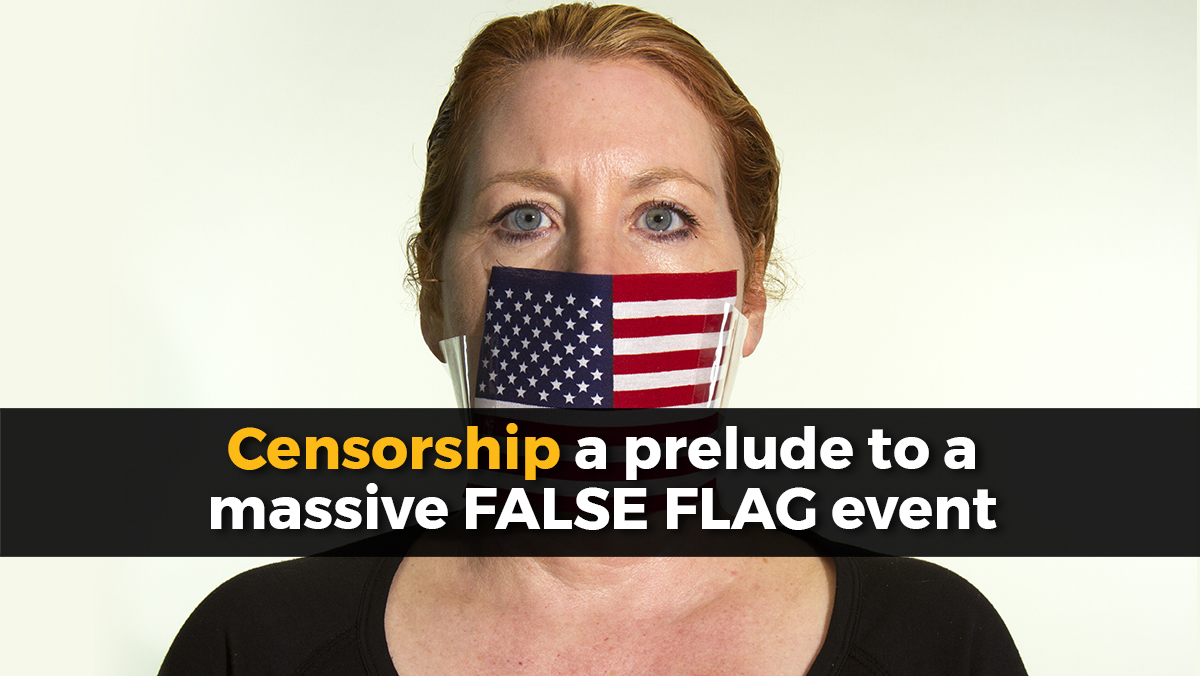 What follows are excerpts from Information Liberation (Chris Menahan) and The Organic Prepper (Daisy Luther):

Yesterday, the alternative media purge was boldly advanced in a coordinated effort to silence people who dissent from establishment views. It’s just one more step toward a monopoly on information by those who hate freedom. At this rate, they’ll soon have unquestioned access to the minds of more than 2 billion people. And this should terrify everyone who wants to be free to question the status quo and to seek a wide range of information.

Hundreds of alternative media site administrators logged onto Facebook to discover that their accounts had been removed. Soon after, many of these sites and their writers found that their Twitter accounts had also been suspended.

The fact that many of these accounts were also suspended by Twitter shortly thereafter should tell you that this is a coordinated effort to silence large swaths of the population.

Mark Zuckerberg and Jack Dorsey just carried out quite possibly the biggest attack on the free press in the history of America and the corporate media is cheering it on.

During the civil war, Abraham Lincoln shut down a few newspapers.

Mark Zuckerberg just shut down 559 pages and 251 accounts — which include tons of massive independent media sites with millions of followers run by Americans — a few weeks out from the midterms.

Jack Dorsey followed it up by banning many of the same independent news sites and the journalists who ran them on Twitter.

Antiwar critics of establishment politics @AntiMedia and @TFTPROJECT just had their pages with millions of followers deleted by Facebook, along with hundreds of other alternative media outlets. Latest escalation of corporate censorship used as state censorship in the west. pic.twitter.com/Fdk9Yd13jI

I know this literally just happened because they RT’ed me an hour ago. pic.twitter.com/RFi280YERD

I’ve been memory holed from FaceBook! 350k followers poof gone! There is a dangerous precedent being set here where the big tech companies have appointed themselves as the gate keepers of political thought and opinion! Retweet this if you care about free-speech! #FreeDicks pic.twitter.com/LsnZvaJyOL

In conservative media, @johnhawkinsrwn is an OG. Started Right Wing News in *2001* & was at vanguard of blogosphere. Now he's targeted by @facebook @Twitter & @nytimes in pre-midterm SV purge of righties.

This is no accident & John is not alone.

Ahead of the midterms, Facebook purged 800 politically oriented pages on the grounds of spamming and “inauthentic messaging.” But Rachel’s account is real & has done none of this. Maybe she just strayed outside FB’s arbitrary political boundaries. https://t.co/paVPMaUxiu https://t.co/KQ8x9WsthR

This is an unprecedented attack on the free press — yet the media which whines about Trump for merely criticizing them is cheering this Orwellian purge on with near-total uniformity.

Consider the fact that the “population” of Facebook is bigger than the populations of the US, China, and Brazil combined.

That’s how many people will now only receive one side of the story on things like war, politics, guns, and current events. People will believe what they’re told because there is no alternative information presented. There are no questions asked. It’s literally the textbook definition of brainwashing.

Social media is a massive source of information and influence today. If the information is rigged by entities that support socialism, gun control, and the end of privacy, we’re doomed. 2.2 billion active users will be bombarded with these messages without any real option for the other side of the story.

So regardless of whether you, personally, participate, this will color popular sentiment to a massive degree. It will grow the cognitive dissonance that assures people of things like “the government is your friend” and that “you don’t need to protect yourself, the police will take care of you.”

People who hate freedom will get unfettered access to the minds of 2 billion people. That should scare the crap out of you.