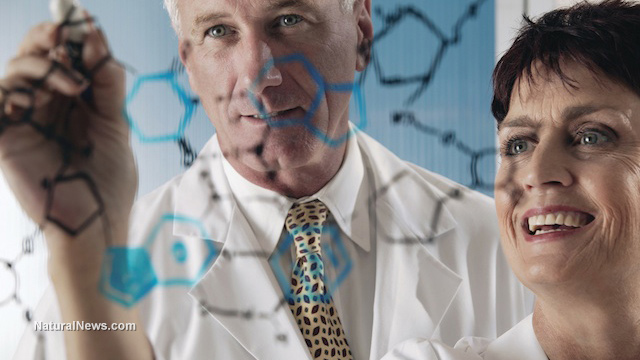 Researchers at the University of Cambridge have succeeded in putting stretchable and washable electronic circuits into fabric, paving the way for producing new “smart” textiles and wearable electronics.

In tandem with colleagues from China and Italy, the researchers were able to show how graphene – a two-dimensional form of carbon – can be instantly printed onto fabric to manufacture electronic circuits that are wearable and at the same time have a long shelf life. They can last for up to 20 cycles in a typical washing machine.

This new discovery paves the way for the creation of two-dimensional material inks, ranging from personal health and well-being technology, to wearable energy harvesting and storage, military garments, wearable computing, and fashion. (Related: Wearable electronic devices could be powered by human sweat.)

“Other inks for printed electronics normally require toxic solvents and are not suitable to be worn, whereas our inks are cheap, safe, and environmentally-friendly, and can be combined to create electronic circuits by simply printing different two-dimensional materials on the fabric,” said the paper’s senior author, Dr. Felice Torrisi of the Cambridge Graphene Centre.

For his part, study co-author Professor Roman Sordan of Politecnico di Milano, said: “Digital textile printing has been around for decades to print simple colorants on textiles, but our result demonstrates for the first time that such technology can also be used to print the entire electronic integrated circuits on textiles. Although we demonstrated very simple integrated circuits, our process is scalable and there are no fundamental obstacles to the technological development of wearable electronic devices both in terms of their complexity and performance.”

Ph.D. student Tian Carey, the paper’s first author, extrapolated on the benefits of the material that they have made, saying, “The printed components are flexible, washable, and require low power, essential requirements for applications in wearable electronics.”

The small textiles industry is currently focused on using graphene and other 2D material links to integrate electronic components and devices into fabrics and innovative textiles. Presently, the use of smart textiles include “smart gloves” which monitor the condition of Parkinson’s disease patients.

Smart clothing has been growing in popularity in recent years, mostly due to consumers’ need to always keep track of their medical/health and wellness condition. For instance, the recently-released smart workout gear provides the capacity to track one’s own biometrics, including health and fitness indicators such as calorie burn, energy output, heart rate, and stress level.

Fashion designer Ralph Lauren and performance-wear brands Athos, Hexoskin, and Physiclo debuted their smart workout gear at the New York Fashion Week in 2015. In the same year, Sensoria released its smart socks, which utilize chemically treated textile patches as variable resistors and silver-based conductive yarn that bridges each sock to a magnetic Bluetooth anklet, which then transmits data to a smartphone-based app. Two pairs of socks and an anklet cost $200.

To learn more about innovations and scientific discoveries, head on to Scientific.news today.