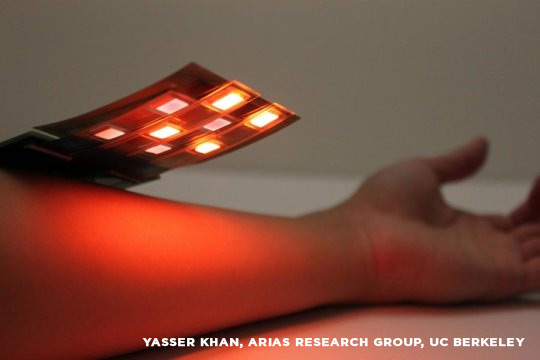 Oxygen is an important ingredient in the body’s natural healing process. To accurately determine if the blood has enough of this vital molecule, researchers have designed a handy oximeter to help in treating injuries. The new blood-oxygen sensor is a flexible device that can scan considerable swathes of skin, tissue, and even organs. By analyzing the levels of oxygen in those areas, it can keep health care professionals appraised of the rate at which your wound is mending.

Researchers from the University of California (UC), Berkeley noted that commercially-available oximeters are big and stiff affairs that squeeze the earlobes and fingers of patients. These devices project red and near-infrared (IR) light through the skin; the amount of light that penetrates to the opposite side of the finger is analyzed.

Infrared light is soaked up by red blood that is rich in oxygen. Red light, on the other hand, is absorbed by darker blood that lacks sufficient oxygen. The ratio between these two types of light can be used to calculate the blood-oxygen ratio of the patient.

Oximeters are only affixed to earlobes, fingertips, and a few other parts of the body that are partially transparent. The older devices are further limited to scanning the oxygenation levels in a single point of the body. (Related: Lemongrass tea boosts the production of red blood cells, making it a great natural treatment for anemia.)

In comparison, the UC Berkeley-developed sensor is slender, ergonomic, and weighs very little. It is made of organic sensors that are 3D printed onto a flexible plastic substrate. The prototype clings to the contours of the body part it is fitted on, making very comfortable to use for long periods of time.

The flexible oximeter can measure oxygenation at more grid points than its fingertip predecessors. It can also be fastened to any part of the body, including arms and legs that were considered to be too thick for older devices to penetrate.

Researcher Ana Claudia Arias and her teammates laid the groundwork for the wearable oximeter in 2014. They printed organic light-emitting diodes that were flexible enough to be used in thinner oximeters. They worked on refining and expanding their early blood-oxygen sensors over the following years. Their biggest change was switching from transmitted light to reflected light as their means of measurement.

The combination of flexible LED sensors and use of reflected light led to their current wearable sensor. The elastic plastic substrate hosts a network of photodiodes and LEDs. All of the electronics are made from organic material.

In a brief trial, Arias attached the wearable sensor to the forehead of a volunteer. They simulated a steady increase in altitude by reducing the amount of oxygen in the bottled air that the participant was breathing.

They reported that their sensor successfully kept track of the blood-oxygen levels despite its position on the forehead, a body part that could not be scanned by earlier oximeters. The accuracy of its readings matched those of a fingertip device. When affixed to the arm of another volunteer with a pressure cuff, the sensor created a map of the oxygenation in a fairly large space, something a fingertip oximeter could never do.

Suggested uses include electronic evaluations of the blood-oxygen levels of skin grafts. It also enables real-time observation of the oxygen levels in transplanted organs.

“All medical applications that use oxygen monitoring could benefit from a wearable sensor,” remarked Arias. “Patients with diabetes, respiration diseases and even sleep apnea could use a sensor that could be worn anywhere to monitor blood-oxygen levels 24/7.”