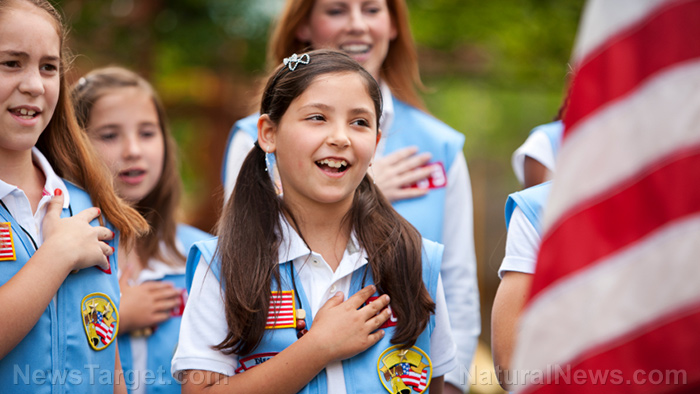 The [un]Democratic Left’s quest to destroy America as founded continues as their efforts to chip away at our founding, our culture, our traditions, and our institutions proceeds apace.

The latest institution to suffer Left-wing infiltration is the Girl Scouts of America (GSA). According to Life News, the organization’s once-subdued support for the biggest abortion provider in the country, Planned Parenthood, is now a bit more in the open. And how ironic, given that the majority of babies aborted are girls.

The group MyGirlScoutCouncil.com, which has monitored GSA for many years regarding its pro-abortion position, discovered recently that the Girl Scouts of Southern Arizona honored a girl over her volunteer work regarding “reproductive health justice.”

Meghna Gopalan, recently profiled in a Tucson publication, received the Gold Award, the Girl Scouts highest honor, for her work. Her project involved working with the pro-abortion Women’s March and its affiliate in Tucson. She said her goal was to “educate people about and destigmatize access to women’s healthcare” — euphemisms for abortion.

“I’m planning on hosting an event to educate people about and de-stigmatize access to women’s healthcare,” Gopalan said. “I’ve been working with El Rio Reproductive Health Access Project, and they offered ideas on reproductive health justice which would broaden the scope of the project a little bit. I got interested in the topic with the Supreme Court nomination of [Brett] Kavanaugh …”

You remember that Democrat-sponsored clown show, don’t you? Now-Justice Kavanaugh was the target of a vicious smear campaign in which a number of women claimed, variously, that he drugged them, raped them, and/or held them down while other boys took advantage of them. All of their stories were judged to be not credible, and in fact, some of them were referred to the Justice Department for possible criminal prosecution (which, of course, hasn’t happened because the DoJ was thoroughly corrupted by Obama). Why the smear? Because Democratic Leftists convinced themselves that Kavanaugh will be the deciding vote someday when the Supreme Court overturns its 1973 decision legalizing abortion.

To this day, however, women like Gopalan still believe that he was guilty — not the women who wrongly accused him. And now, they’re becoming abortion activists who are being celebrated by the Girl Scouts.

As The Daily Wire notes:

Christy Volanski, co-editor of MyGirlScoutCouncil.com, said the Girl Scouts have a “cozy relationship” with the abortion industry. Former Girl Scouts CEO Kathy Cloninger even once admitted on NBC: “We partner with many organizations. We have relationships with … Planned Parenthood organizations across the country.”

GSA remains fairly close-mouthed about its abortion support, however, claiming that it takes “no position” on the issue. But Life News provides a much more complete picture, reporting that “parents, churches, and pro-life activists have long complained of the pro-abortion slant of the Girl Scouts’ resources, role models, and affiliations.”

For example, Life News noted, a 2013 national survey revealed that 17 GSA councils admitted they partnered with Planned Parenthood, while many other councils simply refused to answer the question. Of 315 GSA councils in the United States, 49 others said they did not have a relationship with the abortion provider. But an astounding 249 councils would not answer the question.

The same year, Girl Scouts USA shared a HuffPo article promoting pro-abortion Texas legislator Wendy Davis, a Democrat who challenged Greg Abbott for the governorship in 2016, as 2013 Woman of the Year on its official Twitter account.

Is there anyone you'd add to this list? Incredible Ladies Who Should Be Women Of The Year For 2013 //t.co/r6MAzSH0ZK via @HuffPostWomen

In addition, the GSA said that former HHS Secretary Kathleen Sebelius, an abortion supporter, is a woman “with courage, confidence, and character.” Fun reminder: Sebelius was forced to quit the Obama regime after she completely blew the multi-billion dollar Healthcare.gov Obamacare website rollout.

Read more about the Left’s cult of abortion support at LeftCult.com and Abortions.news.