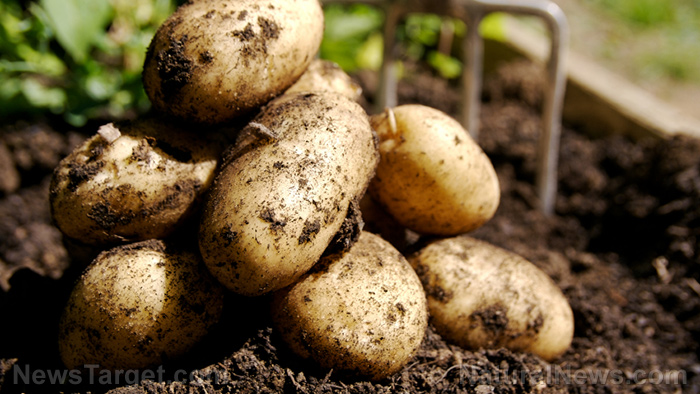 A bioengineer who worked for Monsanto in the past revealed that all kinds of deadly substances accumulated in the GMO potatoes he helped create. Even toxins not found in the food crop appeared in the genetically modified versions.

After discovering disease-resistant genes in wild plants and succeeding in transferring them into domestic strains, genetic engineer Dr. Caius Rommens joined Monsanto in 1995. He spent six years in the company’s disease control program before moving to J.R. Simplot Company, one of the world’s biggest processors of potatoes.

Every year, Rommens developed more than 5,000 varieties of GMO potatoes. He found that none of his modifications increased the vigor or yield potential of the crop plant.

Instead, most of the GMO potatoes turned out to be mutated, sterile, short on chlorophyll, or stunted. Rommens forced the issue and created variants with high resistance to disease, no signs of discoloration on the tuber, and lower risk levels of causing cancer.

Over time, Rommens grew concerned about the safety of his GMO creations. He quit Simplot in 2013 and moved to the Pacific Northwest. He revisited his earlier work on his farm and spotted many mistakes in the GMO potatoes that he created. (Related: Top SEVEN cancer-causing chemicals in American food.)

Rommen realized that he silenced three of the most protected genes in the potato. He shut down the melanin gene PPO, the ASN gene that produced asparagine, and the INV gene that manufactured glucose.

Silencing the PPO gene weakened the natural stress-tolerance response of the potatoes, while shutting down the ASN and INV genes deprived the plant of the asparagine and glucose it needed for proper growth.

At the time, Rommen assumed that each genetic change produced just one effect. But gene functions were interconnected, so changing one affected many others.

Rommen warned that the GMO potatoes he developed for Simplot got marketed under unassuming names like Hibernate, Innate, and White Russet. His former employer claimed that the bioengineered variants were better than normal potatoes, easier to use, and bruised less frequently.

However, the GMO potatoes absorbed at least two toxins that weren’t absorbed by ordinary tubers. The newer varieties also lost their sensory qualities once they got cooked.

GMO tubers also concealed the bruises caused by rough handling – they were just as vulnerable to bruising as ordinary potatoes.

Bioengineered potatoes may end up contaminating and weakening natural ones

The issues related to the three silenced genes proved a tip of the iceberg. Rommen said he found numerous other problems in the GMO potatoes he rushed to develop back in the day.

Most of these genetically modified potatoes were used in the preparation of unlabeled foods. They might only be detected through a polymerase chain reaction test that looked for the RNA of a virus such as HIV.

The potato industry was also mixing up GMO varieties with the most widespread natural variants. Rommens pointed out that ordinary potatoes might end up contaminated with the silenced genes of their genetically modified counterparts.

In his recently published book “Pandora’s Potatoes,” Rommen renounced his bioengineering work at Simplot. He called for the market to get rid of GMO potatoes.

He wrote that the problems with GMO potatoes also applied to other bioengineered foods. At Monsanto, Rommen helped develop GMO varieties with serious flaws. One used an antifungal protein that triggered allergic attacks while a disease-resistant type proved vulnerable to insects.