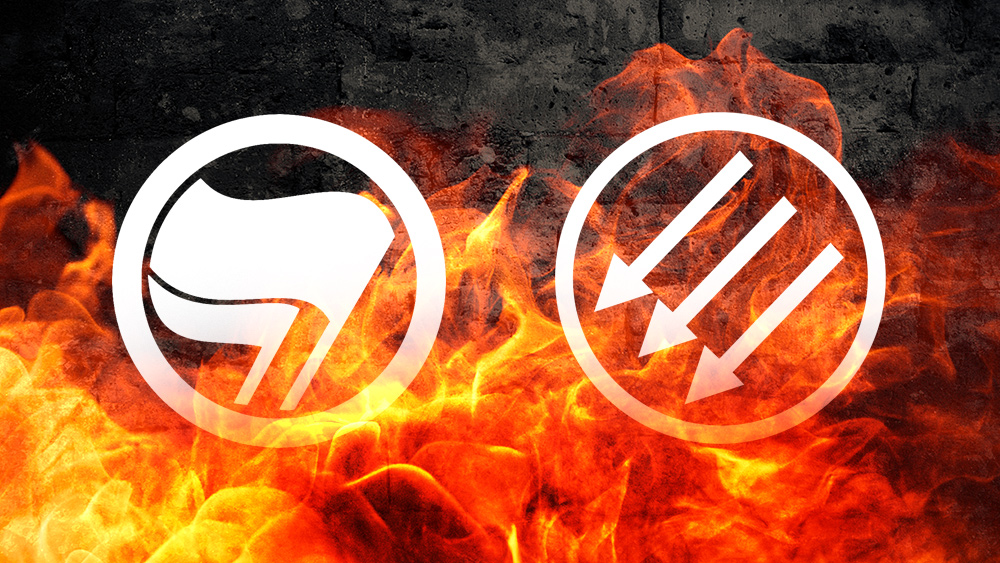 Imagine if a Q-Anon believing Trump supporter armed with an AR-15 firebombed a federal refugee center after releasing a manifesto saying, “I am a fascist.”

We can assume there would be:

– Wall to wall media coverage of the “white supremacist conspiracy theorist terrorist” attack for weeks
– All white people and “whiteness” itself would be blamed for the attack
– The President and Republicans would be called on to denounce the attack and accused of tacitly supporting it and “radicalizing” the shooter
– Democrats would call for AR-15s and other guns to be banned and put through multiple bills in the House
– Republicans like Nikki Haley would call for Confederate statues to be torn down
– Congress would pass yet another resolution condemning “white nationalism and white supremacy” (are we up to number 4, 5 or 6 at this point?)
– Big Tech would deplatform every Q-Anon and anti-immigration group they could possibly justify banning if the shooter so much as “liked” one of their posts or visited their page
– Anyone justifying the attack in anyway would be banned from the internet, have their payment processors pulled and possible even their web domain seized

Nearly this exact same scenario appears to have just happened in reverse — and yet it’s barely even being covered by the news!

We can’t even check off the first line of the above list!

Willem Van Spronsen, 68, allegedly released a manifesto stating “I am anfita” before taking an AR-15 with him on Saturday to firebomb an ICE facility in Tacoma, Washington he believed was a “concentration camp.”

The attack was celebrated by many on the left and Spronsen was hailed as a hero on social media. I could only find one single video — which is under 30 seconds — on the attack from the MSM on YouTube.

Willem Van Spronsen was an anarchist and anti-fascist from Washington who was fatally shot by police on July 13 while trying to set a fire with incendiary devices during an attack at an ICE detention center in Tacoma. Authorities say Van Spronsen was armed with a rifle and threw “lit objects” at buildings and vehicles in the parking lot of the Northwest Detention Center.

Van Spronsen, a Vashon Island musician affiliated with the Puget Sound Anarchists and local antifa groups, was shot and killed by Tacoma Police officers, the Seattle Times reports. No one else was injured.

Right now: Big police presence outside the home of the man shot and killed by Tacoma police after throwing Molotov-cocktails at the Northwest Detention Center @komonews #KOMONews pic.twitter.com/TCDFaLUmbK

Van Spronsen also went by the name Emma Durutti on a now-deleted Facebook page and on an album titled “the audio manifesto” that was posted to Bandcampa week before he was killed. While some have said the Emma Durutti name indicated Van Spronsen was trans — and Emma Durutti did post on Facebook in 2018 calling Willem Van Spronsen a dead name — friends of Van Spronsen say he did not identify as trans and used Emma Durutti as a pen name. The nom de plume is a reference to two of Van Spronsen’s inspirations: Emma Goldman, an anarchist activist, and Spanish insurrectionary Buenaventura Durruti.

The detention center is run by GEO Group, a private company, and has a capacity to hold 1,575 people detained by Immigration and Customs Enforcement. The incident comes amid nationwide protests against planned raids targeting undocumented immigrants announced by President Donald Trump and his administration and outcry against the conditions of facilities being used to hold detained migrants and asylum seekers.

The Northwest Detention Center is still closed after police shot & killed a man identified as Willem Van Spronsen. Police say he threw Molotov cocktails at the detention center. Last year, court documents say he was arrested for assaulting an officer at a protest there @komonews pic.twitter.com/C14xEPBm1f

Van Spronsen was previously arrested in 2018 at the Tacoma detention facility when he was accused of lunging at a police officer who was detaining another protester. Van Spronsen later pleaded guilty to obstructing a law enforcement officer and was given a deferred sentence. On Facebook, using the Emma Durutti name, Van Spronsen had posted frequently about issues connected to ICE detention centers and posted photos protesting outside of the Tacoma facility.

The incident occurred about 4 a.m., Tacoma Police said. Officers responded after receiving a call from an ICE employee at the detention center, according to the police department.

Here is my video which captures Willem van Spronsen, the JBGC antifa militia member who was killed yesterday outside the Tacoma, Washington ICE facility. Police say he arrived with a rifle & began to firebomb the place & attempted to make a tank explode. pic.twitter.com/kPPlyiwVZl

“We are extremely grateful to the officers of the Tacoma Police Department who reacted quickly to the incident that occurred outside the Northwest Detention Center this morning,” Michael Melendez, acting field office director for Seattle Enforcement and Removal Operations at ICE, said in a statement to The Washington Post. “This incident could have resulted in the loss of many more lives, were it not for the brave actions of all the officers involved.”

GEO Group told The Associated Press, that “baseless accusations,” about the facility, “have led to misplaced aggression and a dangerous environment for our employees, whose safety is our top priority. Violence of any kind against our employees and property will not be tolerated. We are thankful for the quick and brave action by the Tacoma Police Department, which prevented innocent lives from being endangered.” The company said the Tacoma detention center has air conditioning and other modern amenities, recreational activities, a bed for every detainee and medical care available at all hours.

Police said they were at the scene investigating throughout the day Saturday. “The facility has been operating normally with detainees able to move about inside the building,” Tacoma Police said.

His friends may have known about the attack in advance.

From the Seattle Times:

Deb Bartley, a friend of Van Spronsen’s for about 20 years, described him as an anarchist and anti-fascist, and she believes his attack on the detention center was intended to provoke a fatal conflict.

“He was ready to end it,” Bartley said. “I think this was a suicide. But then he was able to kind of do it in a way that spoke to his political beliefs … I know he went down there knowing he was going to die.”

She and other friends of Van Spronsen got letters in the mail “just saying goodbye.” He also wrote what she referred to as a manifesto, which she declined to discuss in detail but predicted would be taken by authorities.

Leftists are openly praising Van Spronsen’s attack, sharing his manifesto and hailing him as a hero all over social media — without any censorship:

Antifa are allowed to plan and carry out terrorist attacks against the federal government without their groups facing any repercussions.

Their attacks get sparse and largely neutral and/or favorable media coverage and they face zero censorship from Big Tech in the aftermath.

They’re allowed to use every Big Tech platform to organize their attacks while their victims are all banned for opposing them.

Facebook even changed their rules this month to say calls for “high-severity violence” against so-called “dangerous individuals” that they’ve banned like Paul Joseph Watson and Alex Jones are allowed on their site (and only changed their policy after getting significant backlash).

This is not merely a double standard, it’s a declaration of war against all that is America.