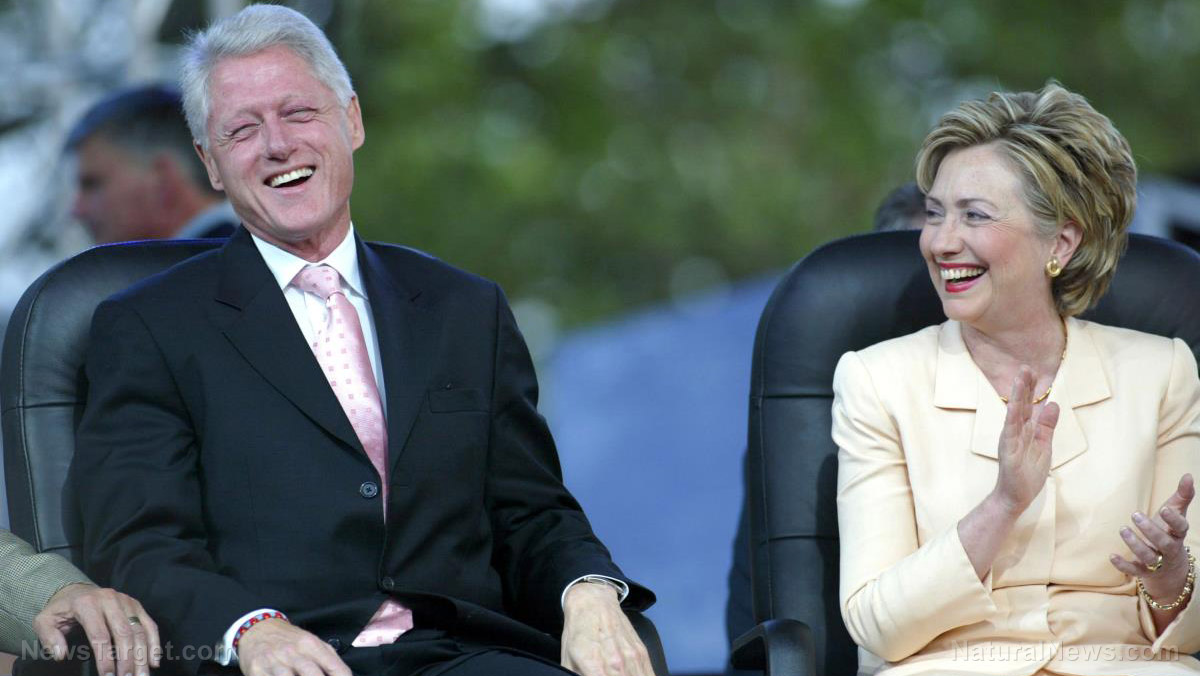 “The decedent shot himself in the back of the head seventeen times with a long-barreled, single shot shotgun. A clear case of suicide.” No one with over two brain cells operating (at least a third of the US population) would believe such a story, but the Jeffrey Epstein “suicide” narrative is just as absurd. When the noted abuser of underage girls was arrested, most of us patriots simply assumed that he would be murdered (unless his death was faked and he was helped to escape!!!!) before implicating the Clintons and most of the rest of America’s aristocracy. In fact, many of us predicted that he would be “arkancided,” the fate of many on the long trail of bodies behind the Demonic Duo (Slick and the Witch), beginning while they were still in Arkansas.

Consider the known facts, which most of the talking heads of the slimestream media and even some at Fox are chalking up to coincidence and human error. Epstein was a prisoner in the Special Housing Unit of the New York City Metropolitan Correctional Center, controlled by the Federal Bureau of Prisons. He was housed with a powerfully muscled mass murderer, despite being a prisoner whose life needed to be carefully protected so that he could testify against his accomplices. This is not what honorable, competent prison officials would do, but it is something people who wanted him dead would do, to prevent him from testifying against them.

He was either injured in a suicide attempt or assaulted by his cellmate, who was then apparently transferred out, and it appears Epstein may have been given a new cellmate (the facts thus far made public in this case are few and far between). Then this man was also transferred out, and Epstein was taken off suicide watch, supposedly at the request of his lawyers…obeying such requests in a case like this also violates standard prison protocol.

Even if he was to be spared the discomfort of 24 hours per day of bright lighting and a guard staring at him nonstop, he should have been in a room with a low bed, but apparently was left with a two-tiered bunk, from which it might be possible (just barely) to hang himself. He was apparently given regular bedsheets, with which it is possible (again, just barely) for a prisoner to hang himself, instead of fragile, easily torn paper sheets. The video cameras in the corridor were all pointed away from his cell, so no videotape record of his manner of death exists (or will be made public). This is right up there with the cameras that failed to record the invisible airliner that allegedly hit the Pentagon on 9/11 and then evaporated.

Already, we have far exceeded the bounds of coincidence and mistakes…but wait; there’s more. Other prisoners heard screaming from his cell at about the time he is alleged to have died. The NYC Chief Medical Examiner, Barbara Sampson, allegedly did an autopsy, “aided” by the ancient Dr. Michael Baden, who had helped cover up the truth about the JFK assassination. Swell. Despite admitting that Epstein had some broken vertebrae and a broken hyoid bone, they predictably pronounced it as a clear case of suicide. That, too, we expected, for in America everything has become completely predictable.

The problem is that, as the pathologist Cyril Wecht and others have pointed out, a broken hyoid bone is generally more consistent with murder by strangulation than with hanging. Also, it would be difficult to do the damage by throwing oneself off a bunk less than six fleet off the floor (a bunk that shouldn’t have been there to begin with). And it would be even more difficult to do with relatively soft and bulky bedsheets. In fact, combining the bedsheets with the low height of the bunk, it would be practically impossible.

But then, it is also impossible for the first three steel framed buildings in history to collapse due to fire to do so on 9/11/2001 right next to one another. And would you believe that all three collapsed straight down in their own footprints, a feat almost impossible to achieve save by carefully planned controlled demolition?

No, we no longer believe. Nothing the government says (even under Trump) and nothing the slimestream media say can be believed. We’ve seen all this before…over and over and over, year after year after year. To the few facts that are leaking out regarding Epstein’s ties to the Clintons and others of the elite, we also have the evidence regarding the NXIVM sex cult, which involved the wealthy Bronfmans, the Comet Ping Pong business, and earlier revelations about the elites’ “love” of children, much of which was revealed years ago in John DeCamp’s book The Franklin Cover-Up.

The suspicious “suicides” include the death of Secretary of Defense James Forrestal, and George de Mohrenschildt, former associate of Lee Harvey Oswald, who allegedly shot himself on 3/29/77, just before he was scheduled to be interviewed by the House Select Committee on Assassinations. Frank Olsen, working for the CIA’s MK Ultra mind control program, allegedly jumped from a high rise hotel window…which is how Forrestal died. Investigative reporter Danny Casolaro was beginning to expose the true nature of the deep state when he allegedly sliced his wrists multiple times (!) and the documents he had vanished into thin air.

Investigative Reporter Gary Webb, investigating possible cocaine smuggling by the CIA, supposedly shot himself twice in the head. Clinton crony Vince Foster allegedly shot himself in a park in D.C with an unregistered gun no one knew he owned. His clothing was covered with carpet fibers, and a visitor to the park claimed to have seen two men driving a car with Arkansas plates carrying something long and heavy (Foster’s body?) wrapped in a carpet. This is just part of the evidence in the Foster case, and of course the Demonic Duo’s body count included many others.

Mary Mahoney, a former White House intern who was about to go public with her account of sexual encounters with Slick Willy, was shot dead, along with several co-workers, in the coffee shop where she worked…and there was no robbery. Slick’s Treasury Secretary Ron Brown was being investigated for corruption and had threatened to testify against Clinton when he died in a mysterious plane crash, along with the crew and the other passengers. Seth Rich worked for the DNC and there is considerable evidence that it was he, not the Russians, who leaked some of their files, and he was shot dead in DC…and, again, there was no robbery.

Read more at: AllNewsPipeline.com and Clinton.news.