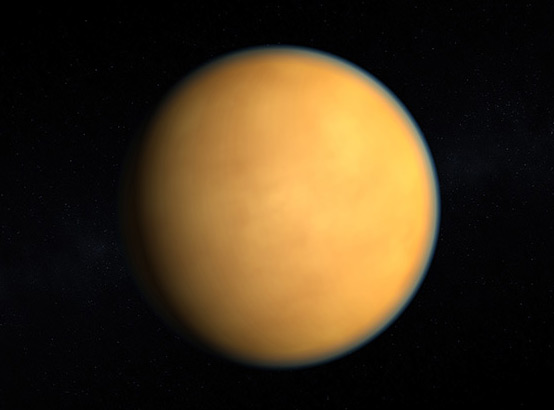 While searching for the source of Titan’s methane, a team of researchers from the University of Arizona discovered a long ice feature that extends to almost half of Titan’s circumference. The study is published Nature Astronomy and partially funded by a NASA grant.

The search for Titan’s source of methane

Titan is the largest moon of Saturn, and the second largest in the solar system after Jupiter’s Ganymede. Titan caught the attention of scientists years ago for its dense atmosphere. Further exploration of the satellite revealed that Titan has features similar to Earth’s, but with different chemical properties. While Earth has bodies of water, scientists have discovered methane lakes near Titan’s south pole.

The atmosphere of Titan is comprised of nitrogen (95 percent) and methane (5 percent). The subzero temperatures allow methane to exist in liquid form. The mystery lies in where Titan gets enough methane to fill up its lakes and atmosphere.

Another theory is that methane can be found in the subsurface and released into the atmosphere through volcanoes. Previous research showed that Titan had potential cryovolcanic activities. Data from NASA’s Cassini spacecraft revealed the existence of the Sotra Folca, an Earth-like volcano with 1,000 m peaks, deep craters, and lava-like flows. Its existence suggests subterranean geological activity, which can theoretically produce enough heat to melt part of the moon’s interior. This will send slush ice or other compounds into the atmosphere.

Caitlin Griffith, the lead author of the current study, and her team aimed to find out if there were other cyrovolcano candidates aside from Sotra Folca.

Griffith and the team decided to use Principal Components Analysis, a technique that allows an easier interpretation of data by emphasizing variation and highlighting strong patterns. It makes multivariable data easier for interpretation and visualization.

The team used PCA to point out the subtle spectral features on Titan’s surface. The research team applied PCA to over 13,000 spectral images gathered in the Cassini VIMS investigation. The Cassini spacecraft uses VIMS (visual and mapping spectrometer) and high-speed spectrophotometry to observe the Saturnian system, which includes Titan’s surface and atmosphere. To narrow their search, the team focused on the tropical latitudes of the satellite.

After analyzing half of Titan’s surface, they did not detect anything. However, they discovered something else: a long ice corridor, which extends to almost 40 percent of Titan’s circumference.

The ice-rich linear feature of bedrock is a mystery. The team did not see a connection between the ice corridor and the subsurface. “Given that our study and past work indicate that Titan is currently not volcanically active, the trace of the corridor is likely a vestige of the past,” Griffith explained.

Furthermore, other ice-rich terrains were mostly found in areas that had been excavated by craters or brought to the surface through erosion. This meant that in the possibility that cyrovolcanism was active, it should not be widespread.

Aside from the ice feature, their analysis also found evidence of diverse organic sediments in different regions. The researchers found these organic deposits particularly interesting. In laboratory simulations of Titan’s atmosphere, they found that it was possible for amino acids – the building blocks of life – to be produced.

Overall, the study has revealed that Titan contains topographical features that could give scientists a better understanding of its geological processes and its potential habitability. The investigation on Titan and the Saturnian system continues.