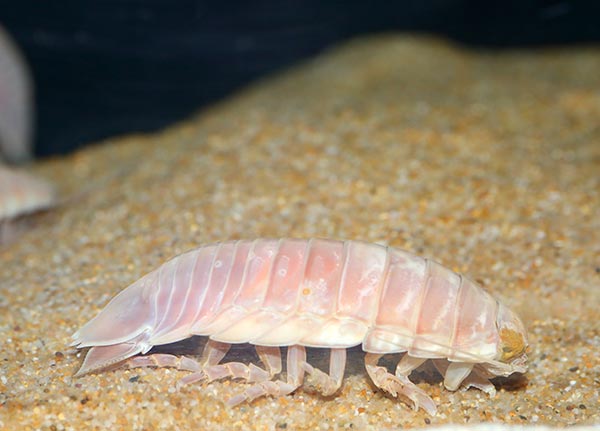 The bottom of the ocean serves as home sweet home to bug-like crustaceans called giant isopods. Able to grow to the size of a football, these pink-colored critters chew through the tough skin and bones of dead animals that reach the seafloor.

Mere hours after the carcass of an alligator or similarly sized large animal hits the seabed, giant isopods swarm over the body in the same manner as terrestrial cockroaches. They will gorge on the meal until they cannot move their bodies.

These marine isopods resemble woodlice (suborder Oniscidea) and pillbugs (family Armadillidiidae) for a good reason. All three belong to the same order Isopoda, meaning they are related.

Researchers have theorized that the marine ancestors of woodlice and pillbugs migrated to the land while giant isopods remained at the bottom of the sea, where conditions allowed them to reach massive sizes.

Despite their insect-like appearance, isopods are crustaceans. They are closer to crabs than to pill millipedes (superorder Oniscomorpha), which also resemble pillbugs, but are true millipedes (class Diplopoda). (Related: Heatwave upside: Butterfly populations bounce back in the U.K. after last year’s warm weather.)

Researchers from Louisiana University Marine Consortium (LUMCOM) conducted the first “food fall” experiment. They sank two alligator carcasses at a depth of 1.25 miles (two kilometers) off the coast of Louisiana and set up equipment to record what happened to the dead animals.

A food fall is an occasion when the carcasses of large marine animals dropped to the ocean floor. They often take place when rivers bring dead animals to the deep ocean.

LUMCOM researchers Craig McClain and Clifton Nunnally explained that their experiment recreated events that might have taken place millions of years ago. During those times, dinosaurs terrorized the land while big marine reptiles like ichthyosaurs, plesiosaurs, and mosasaurs ruled the waves. (And there were giant crocodiles that might have preyed on dinosaurs, too.)

When the prehistoric reptiles died, their carcasses sank to the bottom of the sea. Crocodilian and dinosaur carcasses might have also joined their ocean-dwelling relatives after getting washed out to sea.

“Indeed, alligator and crocodile food falls may be the last remaining refuge of specialized invertebrates that were also in ancient oceans,” the researchers reported.

In the video footage released by LUMCOM, giant isopods gorged on the carcass of the alligators. Their powerful mandibles made short work of both leathery hide and bone – one got past the ribs of the gator to access the softer tissues inside the chest cavity.

The isopods ate so much that they became unable to move after a while. Researchers believed that this ravenous behavior helped the animals survive long periods between rare meals.

The insides of a giant isopod contain plenty of fats and lipids. It may store a lot of energy for the months or years it takes for another food fall to reach the bottom of the sea.

Captive giant isopods kept in Okinawa, Japan display the ability to go without food for up to five years before dying.

The LUMCOM team calculated that the scavengers would take around two months to consume half of the alligator carcasses. They planned to return to the site around that time to observe the presence of other scavengers.