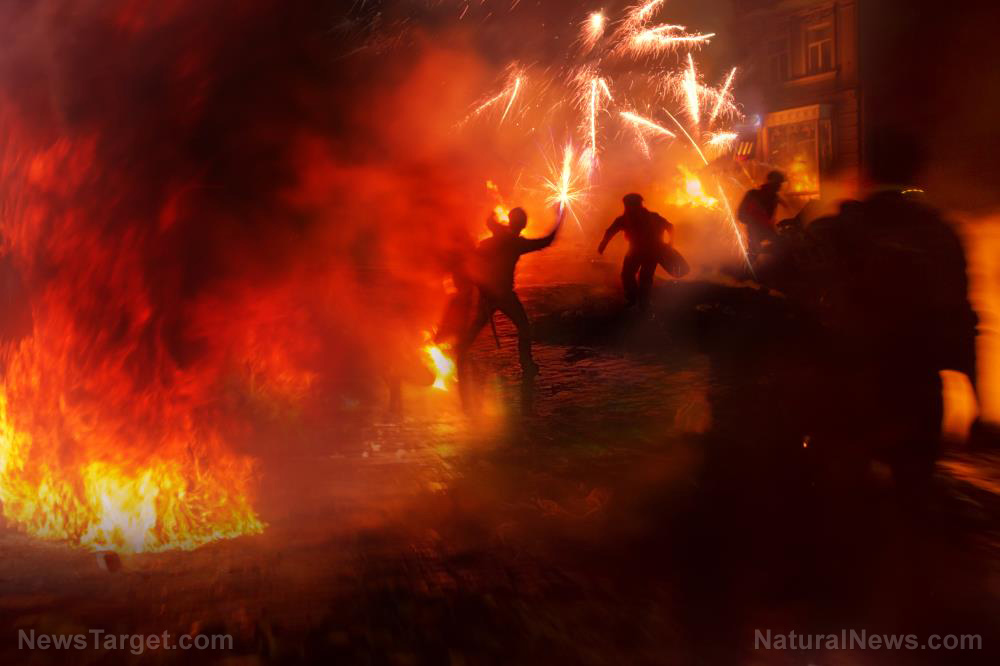 Frank Miele at RealClearPolitics.com has penned an outstanding article describing the historical parallels of today’s radical left-wing Antifa / Black Lives Matter riots. Far from “peaceful protests,” the actions and demands of these cultural Marxists closely resemble the history of Mao’s Cultural Revolution or Hitler’s Kristallnacht, the Night of the Broken Glass.

If we do not learn from history, we are doomed to repeat it. Read and learn, then warn others of what’s coming if the radical left-wing uprising isn’t ended.

[In America last week,] mob violence replaced police as the standard of authority.

When you saw white people taking a knee to prostrate themselves before looters and to renounce their “white privilege,” you also saw parallels to Mao’s Cultural Revolution and Hitler’s Kristallnacht, the Night of Broken Glass.

The Cultural Revolution began with an attack on the old order, the old “privilege” represented by shop owners and college professors. To avoid the mob’s rage, the victims were forced to humiliate themselves publicly and to utter self-denunciations, to confess their “crimes” against the mob’s ideology. But there was no escaping the demented wrath of the self-anointed protectors of virtue. Eventually millions of those intellectuals and entrepreneurs were put to death — sometimes buried up to their necks so that they could continue to abase themselves until their final breath.

Kristallnacht is the name given to a pogrom carried out against Jewish shops, homes, cemeteries and synagogues in November 1938 by Nazi paramilitaries known as Brownshirts. They were an exact parallel of the black-garbed stormtroopers that ravaged neighborhoods in dozens of U.S. cities the last 10 days or so. Don’t let the name Antifa fool you. These “anti-fascists” have adopted the tactics of the fascists as their own (and even the uniform of the Italian Blackshirts).

You could make the case that the riots last week represented only a fraction of Americans, whether black or white, and that we should not ascribe too much importance to them. But that was true also in Nazi Germany and Mao’s China. The actual revolutionaries and radicals carrying out the acts of domestic terrorism are always few, but if they are not condemned forcefully and convincingly, then they are emboldened to strike again and again.

So-called “good” Germans celebrated the lawless attacks on Jewish citizens in 1938, giving tacit permission for the death camps that would kill millions. Many in the power structure of the United States are likewise giving a green light to current and future violence by sanctioning riots as “protests” and by excusing looting and murder as a reasonable response to Floyd’s death.

Tucker Carlson, who has become a modern-day Cassandra, warned us that “[w]hat we are watching is not a political protest; it is the opposite of a political protest. It is an attack on the idea of politics. The rioters you have seen are trying to topple our political system. That system is how we resolve our differences without using violence. But these people want a new system, one that is governed by force: Do what we say or we will hurt you!”

The rioting wasn’t about race or justice; it was about power. You saw people beat a woman in Rochester, N.Y., with a two-by-four; smash in the head of a man seeking to defend his store in Dallas; kill a retired 77-year-old policeman in St. Louis who was protecting a friend’s pawnshop; burn and destroy thousands of stores; and loot everything from Rolex watches to automobiles as if they were the Visigoths sacking Rome.

When such wanton destruction is occurring, normal people have no choice against overwhelming force. If there is no army or police force to protect them, they will either die or surrender and hope that obsequious fawning will buy them — or at least their families — safety. Perhaps that survival instinct is what has led our governing class to kowtow to the looters. The Democratic Party of Fairfax, Virginia, tweeted, “Riots are an integral part of this country’s march toward progress.” Hillary Clinton’s former spokesperson Brian Fallon sent a message to “Defund the police” – as if a nation without police could be anything but a barbaric lawless mess.

If you want more dead George Floyds, take away the police and the justice system and you will have thousands of them, ultimately millions. The point that the rioters and their enablers miss is that when police become criminals, there is a way to hold them accountable, but when criminals become police, they are a law unto themselves, with no court of appeal and no hope for justice.

Who knows what will happen to people in American cities going forward if they don’t denounce their so-called white privilege and bend a knee to those who have power and are willing to use it? A few boys on the island of “Lord of the Flies” resisted the tyranny of the mob and tried to maintain order by an appeal to reason. One boy, Ralph, had been elected as the group’s leader because he seemed to symbolize decency, kindness and honor. But slowly he was displaced by boys who valued action over honor, power over principle:

“Who cares?” came the response from the children.

If that is the same response we accept from our mayors, our governors, our generals, and our media elites, then we have not only lost our honor; we have lost our country.