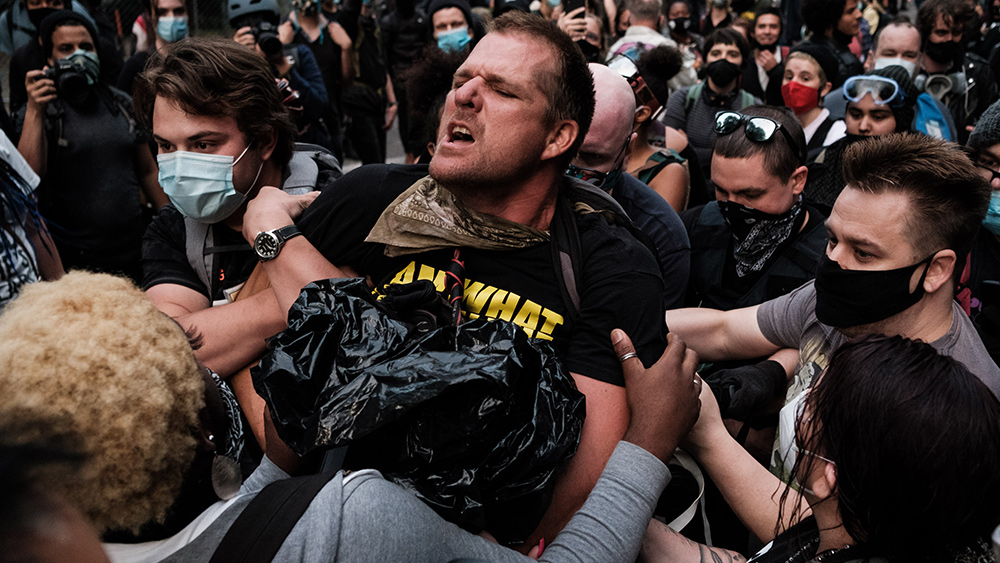 The extreme lawlessness wreaking havoc in Portland continues to worsen, as the Leftist Democrat Mayor Ted Wheeler and other city officials turn a blind eye to the destruction and chaos.

Worse, their calls to eject federal officials from the city are empowering, enabling, and emboldening local Antifa and Black Lives Matter thugs to openly threaten not just the agents themselves but their families as well.

In a press conference earlier this week, Department of Homeland Security officials said that some 38 officers with the Federal Protective Service and Customs and Border Enforcement were “doxed” — that is, their personal information was put online by Antifa/BLM operatives with the intention of enticing people to go to the agents’ homes and threaten their families.

According to Deputy Director of the Federal Protective Service (FPS) Richard Cline, officers and agents have been ordered to conceal their identities by removing name tapes from their uniforms, as a way of preventing them from being positively identified. That said, he noted further that agents are still wearing insignia clearly identifying them as federal officers, as well as the agency they work for.

Members of the Antifa extremist group, anarchists and other radicals have carried out violence in Portland for 52 consecutive nights, Cline said. The rioters have recently shifted their focus to attacking federal facilities, mainly the Mark O. Hatfield U.S. Courthouse.

The initial attacks on the courthouse quickly overwhelmed the regular staff assigned to protect the building. The Department of Homeland Security then reassigned some Border Patrol and Immigration and Customs Enforcement (ICE) officers to the courthouse to reinforce security there.

“We are going to convert their name [tags] to their badge number as about 38 of our officers that are out there have been doxed and their personal information has been put online,” Cline said, according to Fox News.

Acting DHS Secretary Chad Wolf also backhanded Left-wing Democrat smears that because agents are wearing camouflage uniforms they are “storm troopers” and “Gestapo.” He said agents were wearing those uniforms because they are performing a tactical mission and their regular uniforms are insufficient for the mission.

“These officers are not military,” Wolf said. “They are civilian police officers.”

Previously, DHS has said that “violent anarchists” use doxing as a way of striking back at federal officers by exposing them to potential backlash from ‘peaceful protesters.’

In a June report, DHS noted that police officers and federal law enforcers around the country were being exposed and doxed, warning that anarchists and other extremists could use the information to target them at their homes and elsewhere.

“While doxing does not in and of itself constitute a threat to law enforcement and their families, doxing might result in the downstream threat of violence by violent opportunists or domestic violent extremists (DVEs), or otherwise prevent DHS personnel or law enforcement partners from executing their lawful mission,” said the report. (Related: Antifa and BLM rioters attempted to BURN DOWN Portland police union’s office building.)

Cline did not say whether federal officers in Portland or their families have been targeted following the recent doxing.

But acting CBP Commissioner Mark Morgan blasted the practice, adding that because of it he has told his agents to remove identifying items from their uniforms.

“So yes, as acting commissioner, I have authorized and supported removing their names from their uniforms,” he added.