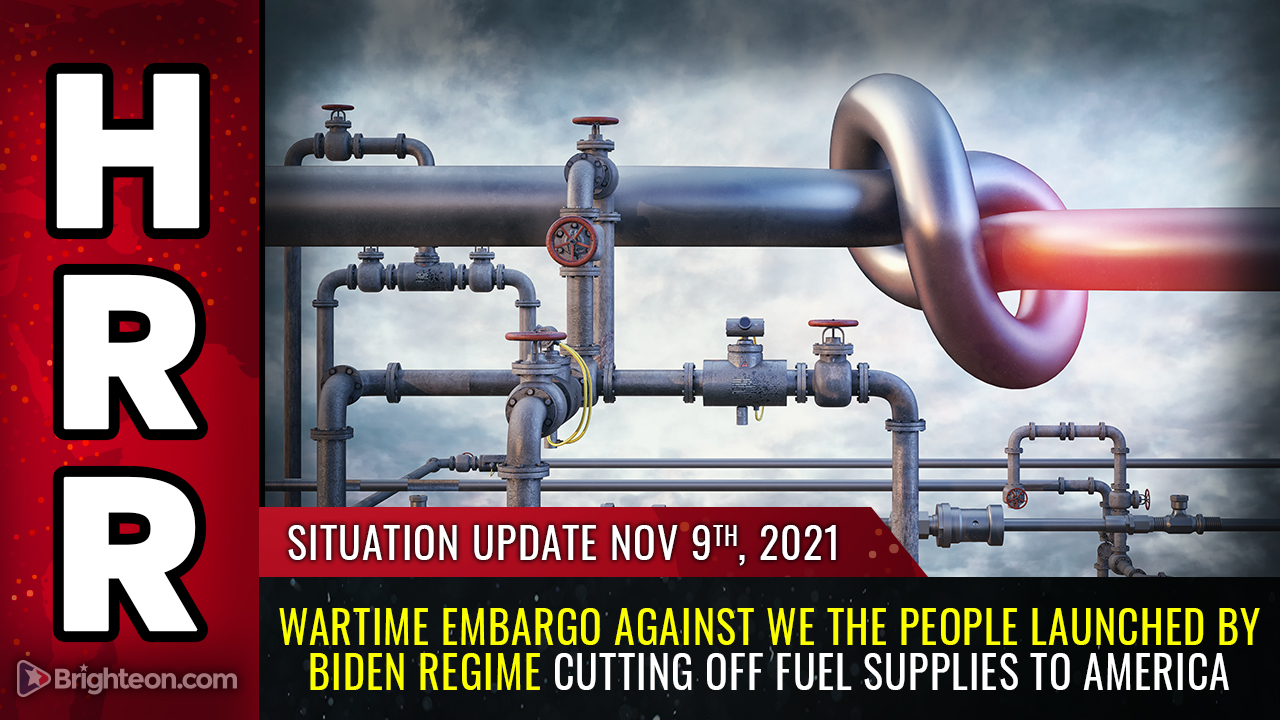 In his latest act of total warfare against the American people, Joe Biden is pushing to shut down the Line 5 pipeline in Michigan that transports over 500,000 barrels of crude oil per day from Canada to Michigan, where it gets processed and distributed throughout the Midwest.

Without this pipeline, Midwestern states are going to face critical shortages of fuel this winter, at the same time Biden’s handlers are engineering a supply chain collapse, food shortages and unrelenting inflation.

Jason Hayes, the director of environmental policy at the Mackinac Center for Public Policy, blasted the Biden administration for its energy policies, telling Fox News that their work on Line 5 is “just one more example of being divorced from reality.”

Hayes presented a dire picture of what shutting Line 5 could mean if people are unable to get natural gas or the electricity it provides as the nation heads into winter.

“I hope it doesn’t end like this, but where I see it going is unfortunately the same thing that happened in February in Texas: People freezing in their homes,” he said.

Pipeline is “essential to the lifeblood of the Midwest”

The deliberate shutting down of this pipeline is an act of war against We the People, as the Biden regime transforms America’s heartland into an active theater of war which will soon face widespread food scarcity, energy scarcity and inevitable civil unrest.

As the UK Daily Mail explains:

The Biden Administration is considering shutting down a Michigan oil pipeline despite warnings from Republican lawmakers who believe the move would result in fuel price shocks throughout the Midwest.

The administration is exploring the possibility of terminating the Line 5 pipeline — which links Superior, Wisconsin, with Sarnia, Ontario — and gathering data to determine if shutting down the line will cause a surge in fuel pricing, according to published reports.

In a letter dated Thursday, 13 Congress members — led by Ohio Rep. Bob Latta — urged the president to keep the oil line in operation, saying: ‘Line 5 is essential to the lifeblood of the Midwest.’

With alarm bells going off over Biden’s deliberate destruction of America’s economy, Texas Sen. Ted Cruz is now voicing what millions of Americans are already thinking: At some point, the remaining “free states” have to cut ties with Washington D.C. and form their own new nation, just to survive the planned civilization suicide being pursued by the demon-possessed Democrats.

If the Democrats end the filibuster, if they fundamentally destroy the country… if they pack the Supreme Court, if they make DC a state, if they federalize elections, if they massively expand voter fraud, there may come a point where it’s hopeless…

We’re not there yet, and if there comes a point where it’s hopeless, then I think we take NASA, we take the military, we take the oil.

Importantly, Sen. Cruz isn’t calling for secession at this point, but he’s clarifying that it may be the last remaining option if Democrats continue to wage actual warfare against America in their quest to destroy this nation.

“The Fate of the American Republic Has Been Sealed,” declares an article at StateOfTheNation.co, authored by the Armchair Political Philosopher. It warns, “To survive, those conservative states populated with a critical number of Patriots must expeditiously NULLIFY
the U.S. Federal Government for good!” The article states:

…[W]herever the New World Order globalists have taken over such as California and New York, there is simply no bringing them back to the American Republic as it was conceived by our Founding Fathers and codified by the U.S. Constitution.  They have already taken down the statues of those extraordinarily great men such as Jefferson, Washington, Lincoln, Lee, etc.

Therefore, the only way forward, for those states which respect the rule of law and Founding Documents, is to secede from the Union of 50 states.  The NWO globalist cabal essentially owns and operates the U.S. Federal Government; and it will never willingly relinquish that raw political and military, financial and economic, social and religious power it wields over the American people.

Hence, the Patriot Movement has only one option.  Federal power projected from inside the Beltway cannot be effectively fought, but it can be ignored.  The red states such as Florida and Texas can cut the umbilical cord to Washington, D.C. which is an unconstitutional and tyrannical city-state that has absolutely no legitimacy in a constitutional republic / representative democracy.

Some Americans believe that “white hats” are still somehow in charge and that Trump is secretly still in power, with Joe Biden acting as a puppet president in order to wake up the American people to the sheer terror of Big Government, Big Media, Big Pharma and Big Tech all conspiring to mass murder humanity.

The fact the Joe Biden is broadcasting from a fake Oval Office built on a sound stage only adds to the speculation that what we’re watching is pure theater.

If that’s true, and if this is all just theater, what will be the final act? Mass death of vaccine-injected children and mass starvation across the nation? Because that’s where Biden and the Democrats are pushing things. If we don’t stop them soon, tens of millions of Americans will likely perish from the collapse.

If this is theater, it’s also a Holocaust-level tragedy in the making.

Find a new podcast each day — plus amazing new interviews — at: