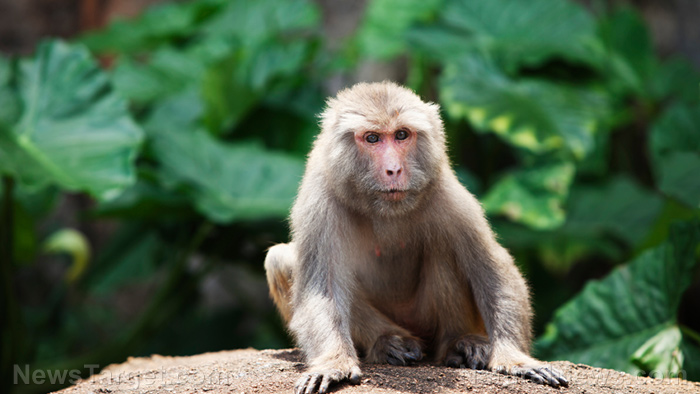 When a truck that was carrying 100 lab monkeys crashed in Pennsylvania, the public was warned not to approach any of the missing primates, who were being transported to a quarantine facility after arriving in the country from Mauritius. However, one woman who may not have heard the warning and stopped to help has developed symptoms such as a cough and pinkeye after one of the monkeys hissed in her face.

Michelle Fallon had been driving directly behind the vehicle when the crash took place at the intersections of State Route 54 and Interstate 80 near Danville. Animal crates were thrown all over the highway, and some of them were smashed. Four of the monkeys escaped and went on the run, with one of them remaining missing well into the next day. Troopers were seen searching for the monkeys with rifles, while firefighters used thermal imaging to help locate the animals.

While the monkey was missing, state police sent out a warning saying that anyone who sees or locates the missing monkey should not approach it, come into contact with it, or attempt to catch it and should instead call 911 right away. However, the danger wasn’t immediately obvious in the moments following the accident when Fallon stopped to help.

She has now developed symptoms of pinkeye and a cough and is concerned because she was close to the monkeys, touching their crates and walking through their feces. She got out of her car to help the driver and the animals, which she at first believed were cats. When she approached one and placed her hand on the cage, the macaque hissed at her. She also had an open cut at the time.

Fallon has been given the first of four rabies injections as well as antiviral drugs and is monitoring for symptoms of rabies and monkey herpes virus B. Although monkey herpes virus B is rare, it can lead to severe brain damage and even death if it is not treated immediately. Infection can occur when a person is bitten or scratched by an infected macaque monkey or has close contact with the monkey’s nose, mouth or eyes.

She has been advised to monitor her health for the next month for any signs of infection or disease. She said: “I have anxiety, so I just know I’m going to be a nervous wreck for the next 31 days.”

First responders receive a letter advising them of potential dangers

Fallon received a letter that was written to first responders advising them of the potential dangers of contact with the primates in the accident. The letter pointed out that these animals and humans are susceptible to many of the same diseases. It advised first responders who had physical contact with a loose monkey to get medical attention immediately and notify the Pennsylvania State Department of Health. Some of the signs they were told to look out for include cough, fever, fatigue, vomiting and diarrhea.

The surviving monkeys, according to the letter, are being quarantined and monitored for infectious diseases for at least 31 days. Three of the monkeys that escaped have already been euthanized.

The location of the lab and the type of research the monkeys will be used for were not immediately clear, but cynomolgus monkeys are typically used for medical studies. The crab-eating macaques can cost as much as $10,000 and are in high demand during the COVID-19 pandemic thanks to their DNA, which is highly similar to that of humans. They are known for being intelligent and social and can even use stone tools in the wild.

It remains to be seen whether any of the escaped monkeys transmitted diseases to other animals or humans while they were on the loose, but it’s scary to think how easily an accident like this could put human health at risk.