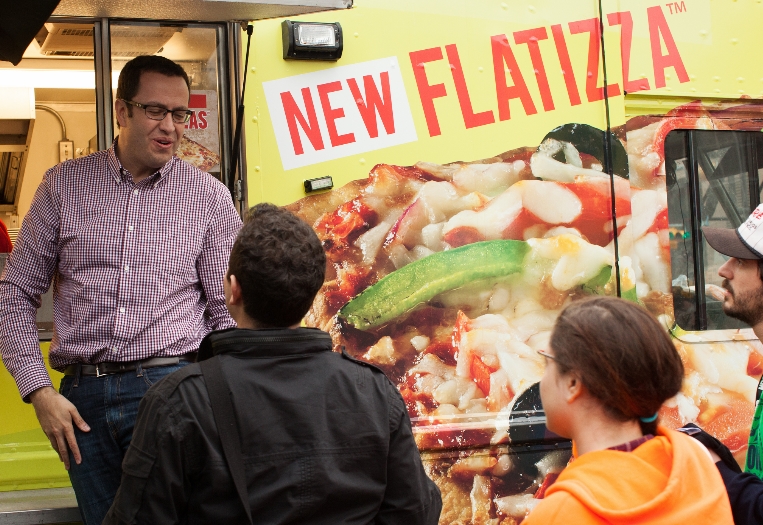 Former Subway spokesman Jared Fogle was sentenced to 15 ½ years in prison Thursday afternoon by a southern Indiana judge known for being tough in the courtroom. U.S. District Judge Tanya Walton Pratt issued the sentence after Fogle pleaded guilty to the possession of child pornography and traveling across state lines to have repeated sex with minors.

Prosecutors said in court that the defendant was in possession of more than 600 child pornography images, many of which were given to Fogle by Russell Taylor, former head of the Jared Foundation, who was arrested in April and charged with child exploitation, possession of child pornography and voyeurism, the sexual interest of observing unsuspecting individuals who are naked or engaging in sex acts.

Prosecutors were satisfied with Judge Pratt’s sentence, considering they had asked he only serve 12 years in prison, according to NPR. The defense, however, wasn’t so lucky.[2]

Desperate for a defense, forensic psychiatrist John Bradford blamed the Subway diet for Fogle’s decision to rape and molest children. “Once he lost weight, it seemed as though in a short time he had hyper-sexuality,” Bradford said in court. “There are brain disorders that can be associated with sexual drive.”

Despite the fact that audiotapes show that Fogle’s sexual attraction to children spans all ages, particularly 10-year-old boys and girls, Bradford diagnosed the former Subway spokesman as only having “mild pedophilia,” insisting that his fantasies of “pre-pubertal children” are “mild or infrequent,” reported the Indianapolis Star.[3]

“There’s no evidence I know that he molested a child,” Bradford said.

However, an October 29 Dr. Phil episode titled “From Subway Sandwich King to Child Sex Scandal” revealed the true depth of Fogle’s sexual obsession with children as he’s heard describing how “wonderful” it was having sex with a 10-year-old girl.

The tapes also expose Fogle’s plans to have sex with a 6-year-old girl. Although the FBI was listening in, the incident wasn’t stopped due to the supposed lack of information.

Fogle even asked to see the children of Rochelle Herman-Walrond, the former TV journalist who pretended to have an intimate relationship with Fogle so the FBI could build a case against him.

During Thursday’s court proceedings, the forensic psychiatrist said that if he had met Fogle seven years ago, he would have put him on Zoloft and “this wouldn’t have happened.”

His attorney argued Fogle “traded a horrible food addiction for a horrible sex addiction.” They also said Fogle had already suffered enough through the loss of his marriage, career and reputation.

“When your honor is considering what is just punishment, we ask that you consider unique consequences Mr. Fogle will suffer the rest of his life,” said Fogle’s attorneys.

“The time in prison will be harder for him than for prisoners who committed the exact same offense. … Mr Fogle has destroyed his life. He did it to himself. … His punishment is not going to stop when he gets out of prison. Sixty months is enough for him to know he’ll never do this again.”

Text messages revealed Fogle offering to pay “big” if an 18-year-old prostitute brought him 14- or 15-year-olds. Fogle said the price he was willing to pay depended on whether or not they could prove their age.

Fogle has been on house arrest since his home was raided in July. It’s unclear when he will turn himself in to begin his prison sentence.