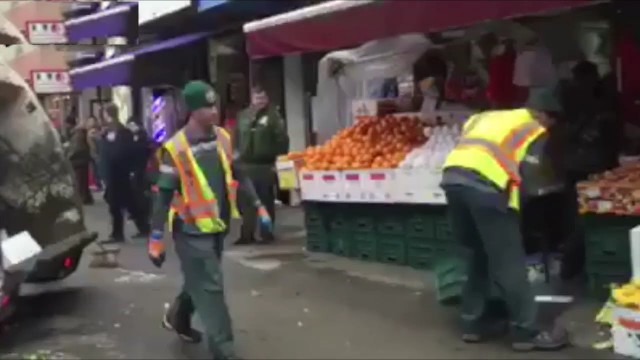 There is a distinct trend occurring in U.S. states that is bound to continue – states are separating into bastions of freedom or dark wells of tyranny. The same is true of individual cities; add the Big Apple to that latter category.

In a video sent to The Free Thought Project in recent days, which was initially posted on the Facebook page of Gary Schlesinger of Brooklyn, trash collectors in New York City are being ordered by a city police officer to confiscate dozens of cases of fruits and vegetables and toss them into the back of a trash truck.

According to Schlesinger, “NYC [is] cracking down on fruit stores that put out merchandise more [than] 4 feet from the store.”

Apparently the food was partially blocking a sidewalk, and so, for that heinous crime and rather than ask the store owner to move it, the food was thrown away. Not only did that cost the store owner a chunk of cash, but a food shelter that could have used those fruits and vegetables was deprived of it as well.

So, despite the fact that there are children hungry in the city, New York City democratic socialist Mayor Bill DeBlasio’s administration would rather sanction the destruction of good food than support reasonable alternatives to throwing it out.

But it’s not just New York City where this kind of Nazi-like food authoritarianism is occurring, as noted by Activist Post:

Actually, this type of food destruction happens a lot – but usually to small-time rural farmers when no one’s watching. Government agencies have developed a reputation for dumping and destroying raw milk as a signal to farmers to stop providing real food to their communities. In one harrowing incident, tens of thousands of pounds of cheese were destroyed while agents laughed about it.

Ironically, though not surprisingly, this kind of food waste is occurring at precisely the time when the federal government and accompanying non-governmental organizations (NGO’s) are launching campaigns against food waste.

According to a recent press release from U.S. Dept. of Agriculture Secretary Tom Vilsack:

Vilsack, the former governor of Iowa, who is a friend of Monsanto, GMOs and pink slime, was also a chairman of the Governors Biotechnology Partnership, the Governors Ethanol Coalition, and chair and vice-chair of the National Governor’s Association’s committee on Natural Resources, where he worked on farm and energy policies.

What’s really at issue here is freedom, and Americans’ continual loss of it. It hasn’t occurred all at once but slowly, over many decades. There are some victories for freedom here and there, but overall Stalinist nannies have permeated every single level of government.

Worse, they have forgotten – or never really knew – that their role is not to lord over us with inane rules but protect our freedoms.

No one believes there shouldn’t be any rules whatsoever, of course, but when it comes to essentially stealing a food vendor’s goods and throwing them away with impunity, and without compensation, the pendulum has definitely swung too far.