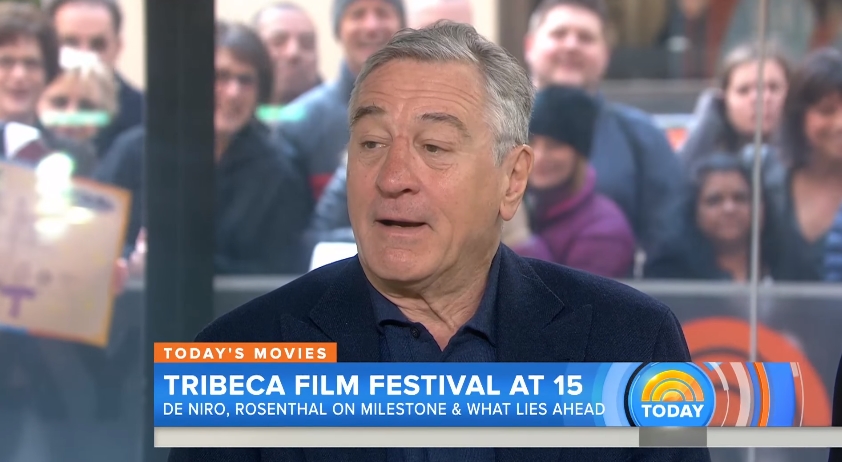 Editor’s Note: The film Vaxxed regarding the CDC Whistleblower may have been censored at the Tribeca Film Festival and others but it is not stopping people from watching it and, in fact, the more the system tries to censor it, the more people want to see it.

Bang: Robert De Niro wakes up and opens up on vaccines

After censoring the film Vaxxed, he decides to make a stand

On NBC’s Today Show, Robert De Niro just broke his trance and started talking sense about vaccines. He refused to back down and knuckle under. Watch the interview here:

It’s the leading edge of a new storm.

De Niro wouldn’t accept the canned notion that vaccines are remarkably safe and effective and necessary. He expressed doubts. He linked vaccines to autism. He stood with the mothers who know their children were tragically damaged after being vaccinated.

You could say this is too little too late, because the actor already canceled Vaxxed (trailer) at Tribeca, his film festival, but it isn’t too late.Vaxxed is playing in New York at the Angelika Theater (through April 21). It’s going to travel. The demand for it is great.

So let me now broach the wider subject of medically caused death and damage, because the background is essential to understanding the medical edifice, and why the media, at the deepest level, must remain silent.

“If instead of drugs like warfarin, dabigatran, levofloxacin, carboplatin, and lisinopril (the five leading killers in the FDA database), the massive numbers of deaths per year were led by gingko, ginseng, vitamin D, niacin, and raw milk, what do you think would happen?

“I’ll tell you what would happen. SEALS, Delta Force, SWAT teams, snipers, predator drones, tanks, and infantry would be attacking every health-food store in America. The resulting fatalities would be written off as necessary collateral damage in the fight to keep America safe and healthy.” (Why the FDA should be charged with murder, Jon Rappoport)

I know major media won’t reveal medically-caused death numbers, because I’ve published reports for years, and I’ve contacted news people with the facts; and nothing happens.

So we begin with a few citations.

July 26, 2000, Journal of the American Medical Association; author, Dr. Barbara Starfield, revered public health expert at the Johns Hopkins School of Public Health; “Is US health really the best in the world?”

Starfield reported that the US medical system kills 225,000 Americans a year. 106,000 as a result of FDA-approved medical drugs, and 119,000 as a result of mistreatment and errors in hospitals. Extrapolate the numbers to a decade: that’s 2.25 million deaths. You might want to read that last number again.

I interviewed Starfield in 2009. I asked her whether she was aware of any overall effort by the US government to eliminate this holocaust, and whether she had ever been contacted by any government agency to consult on such an effort. She answered a resounding no to both questions.

Here is another citation: BMJ June 7, 2012 (BMJ 2012:344:e3989). Author, Jeanne Lenzer. Lenzer refers to a report by the Institute for Safe Medication Practices: “It calculated that in 2011 prescription drugs were associated with two to four million people in the US experiencing ‘serious, disabling, or fatal injuries, including 128,000 deaths.’”

The report called this “one of the most significant perils to humans resulting from human activity.”

The report was compiled by outside researchers who went into the FDA’s own database of “serious adverse [medical-drug] events.”

Therefore, to say the FDA isn’t aware of this finding would be absurd. The FDA knows. The FDA knows and it isn’t saying anything about it, because the FDA certifies, as safe and effective, all the medical drugs that are routinely maiming and killing Americans.

Previously, I have documented that the FDA knows; because the FDA had, until recently, a page on its own website that admits 100,000 people are killed every year by medical drugs, and two million more people are severely injured by the drugs. A few months ago, the page was removed.

The obvious reason: their big-spending pharmaceutical advertisers would drop them like hot potatoes.

But there are other reasons.

Every medical bureaucrat or medical shill or medical expert who jumps aboard the media train, to assure the public that drugs and vaccines are remarkably safe, is sitting on the time bomb I have described above.

This is a key, key fact. If this bomb were widely recognized, who would continue to believe these professional liars? Who would accept anything they say? How could they possibly sustain their credibility?

It would be on the order of Joseph Stalin, who sent 20-40 million people to their deaths, stating that hard work in harsh conditions improved general health.

Every single pronouncement, on any subject, issued via the medical cartel’s Ministry of Truth would fall on disbelieving ears, and only increase general outrage.

The assuring attitudes of its professional representatives would immediately be taken as rank fraud of the worst kind.

And this would just be the beginning of the trouble.

Mainstream reporters and editors and publishers are well aware that telling the truth and continuing to pound on it would do great damage to the whole medical system. The fact that the damage is deserved is beside the point. Undermining a basic institution of society is not on the media’s calendar.

The media are there to give credibility to society and its structures. That’s why they’re called “major” instead of “minor.”

When hard rains fall, the media are there with an umbrella to hold over organized society’s head. To walk away in the middle of a downpour would leave the status quo unprotected.

“Defending the Crown” is another way to put it. The King may make mistakes, he may commit heinous offenses, but he is the King, and therefore his position must remain secure.

Young journalists learn this point quickly. If in their zeal, they cross the threshold and attempt to expose a central myth, fairy tale, legend, they’re put back in their place. They absorb the message. Journalism has limits. Certain truths are silent truths.

Over the years, I’ve talked to reporters who are solidly addicted to obfuscations. Like any addict, they have an army of excuses to rationalize their behavior. They’re all attitude. They snarl and grouse if you push them too far. They assert their position, as if they own their territory, as if they’ve earned their titles.

They remind me of drunks with significant bank accounts. They’re not winos drifting in alleys. Oh no. They imbibe the good stuff. They take pride in that.

The medical experts are worse. Their pretense of idealism knows no limits, and is matched only by their claim to bullet-proof knowledge. They resemble elite new anchors, who above all learn superior acting skills. The central mission of both professionals: sound and appear utterly convincing.

What would you do if you were an actor working in a major Broadway production, along with several actors who were, in real life, murderers? Every night you go out on the boards and do your turns, and you know the play is, in a real sense, a cover for the terrible deeds your partners are committing.

I can tell you what news anchors and reporters do in that situation. They polish their performance, hoping to establish such a high degree of credibility that the secrets they conceal will never be suspected, or God forbid, exposed.

When you peel the veneer away, they are enablers, persons of interest, co-conspirators.

There is nothing quite like a high-minded, socially-positioned, card-carrying member of the King’s circle of protectors. The arrogance is titanic. Because what is being protected is so explosive.

225,000 deaths a year at the hands of modern medicine. Two to four million maimings. 2.25 million deaths per decade. The Crown is responsible. The Crown commits these crimes.

And yet it is the duty of the Crown to make his subjects feel safe and protected and even loved.

No wonder he needs such a large army of trained helpers in and around the press.

But their monopoly is breaking down.

We’re at the beginning of a new breakout level of truth.