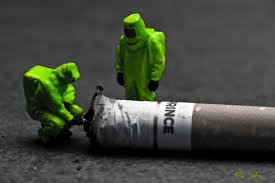 Put on your complete HAZMAT suit and step slowly and carefully … into the mad, mad world of the domestic chemical nightmare known as the commercial cigarette. Just 65 years ago, while American medical doctors were lying through their teeth about cigarettes, saying they were healthy, good for digestion, and recommended them between meals, scientists in labs were figuring out how to make nicotine thirty-five times as potent by using ammonia blended into vapor form. See now that nicotine comes in as a vapor, instead of traveling on tobacco particles and having to dissolve in the lungs, now, the heart and brain feel the JOLT OF NICOTINE in 3 seconds. Bang. Just like that. That’s going on inside the factory, the lab, the manufacturing plant. The scientists figured this all out in the 1960s. That’s why, before that, it wasn’t very difficult to quit cold turkey, because the addiction to nicotine was only to 3 to 4 milligrams, maybe 6 with the blends. 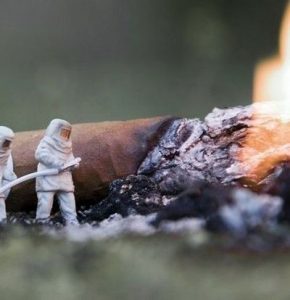 Venture inside a cigarette to the microscopic glass shards better known as glass wool, inside the filter. Why on earth would chemists and pharmacologists be interested in using this for cigarettes? Are prescription medications nothing more than a mirror for your pain and agony? Is the torture not the same, but with different side effects?

Step inside the cigarette, the domestic, modern, advanced, technologically superior cigarette, which has tobacco leaves that have pesticide WOVEN INTO THEIR DNA – yes the plants actually create pesticide to kill horn worms and other “crop pests” that eat tobacco and its roots, stealing from corporate profits. The tobacco is GMO.

Investigate the inner workings of the cancer stick, the coffin tack! Tiny plastic particles called cellulose acetate are carefully “braded” into the papers to make them BURN hot, hot, hot, keeping that nicotine action strong for the addicts, the guinea pigs, the “heads.”

45 million Americans. Forty five million. That’s how many people in the USA smoke. That’s about one in every seven people you see on the street, no matter the age. Half want to quit, and the other half already tried more than once and failed, and have all but given up. None of them know about nutrition. You can’t blame them. There is NO USA education about nutrition anywhere unless you go to a specific college for it. It’s banned in US medical schools now. It’s been banned for 100 years – that’s right – no MD can say that any food or herb or natural tincture can cure ANYTHING EVER or the AMA comes to visit them, and their license is suspended. Period. Any questions?

Deep inside the American cigarette there is a chemical “affair” going on where 600 different ingredients mix and burn to create 6,000 chemicals at 1700 degrees. The glass wool filter cools the smoke and tar and ammonia just enough to let you breathe it in for the fix that lasts maybe twenty minutes, then it fades slowly until … wait for it … the chemical hangover CREEPS IN as the nicotine disappears entirely from the equation. The upper drug is gone and the downer chemicals consume your health, until your cravings for relief are SO BAD that you do the unthinkable. You light a new cigarette. It’s the habit you hate, but the chemicals are married to each other, as they go round and round and round, nicotine, ammonia, nicotine, pesticide, until your cells warp and you get the “c” word, or you quit smoking and get clean.

Get out … before you “drown” in chemicals

Climb OUT of the chemical factory and detoxify from the fix. It’s time to take care of YOU, because face it, nobody else is. Look out for yourself. Start a garden. Start a workout plan. Start quitting cigarettes … tonight. Here’s how: 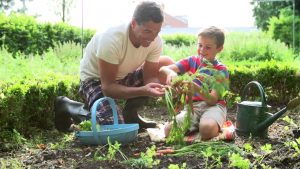 Recommended by the Health Ranger of Natural News and leading nutritionists, including raw food expert and bestselling author David Wolfe.