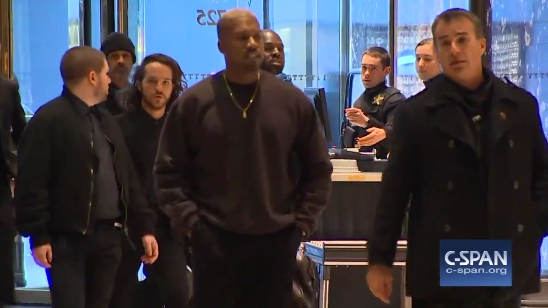 Kanye West was spotted entering Trump Tower on Tuesday morning with a large entourage in tow.

A pool reporter noted the rapper’s presence, but was unable to determine the reason for his visit.

West did not take any questions.

Kanye (and entourage) arrives for a meeting at Trump Tower. Real life. pic.twitter.com/W9PQDgfQmg

The eccentric musician, who is married to Kim Kardashian, claimed last year that he plans to mount a presidential bid in 2020. A spokesman for Trump confirmed that the rapper is meeting with the president-elect.

Trump spox Hope Hicks confirms @kanyewest is meeting with the president-elect, though it is still unclear why. — Oliver Darcy (@oliverdarcy) December 13, 2016