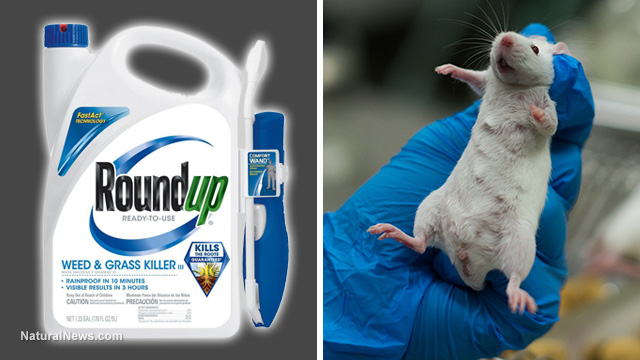 As you sit down to your various holiday feasts during the next week or so, maybe you ought to think about what’s in your food.

Do you really know the chemicals and GMO ingredients, which the U.S. Environmental Protection Agency (EPA) probably EVEN doesn’t know many of them due to Monsanto’s probable unreported and/or hidden ‘science’ not surrendered as part of the ‘approval’ process for either glyphosate, Roundup® and Roundup Ready seeds for soy, corn, canola, alfalfa, cotton, and sorghum—with wheat under development!

It’s bad enough that numerous crops are “staged” with glyphosate spraying several days before harvest, which impregnates them with glyphosate residues, and that could be a contributing factor and reason for “gluten intolerance.”  Genetically modifying wheat is NOT a good idea, since wheat is the western world’s grain, similar to rice being the eastern world’s grain.  And “Golden Rice” hasn’t been accepted very well either.

Monsanto’s lobbyist, Patrick Moore, refuses to drink some Roundup® after proclaiming it won’t hurt you because, as he says, “I’m not an idiot!”  What does it tell you about that herbicide and, especially, Monsanto’s own lobbyist, who was promoting GMO Golden Rice, and their products?

Here’s an interesting article from the Harvard University Graduate School of Arts and Sciences website titled “Why Roundup Ready Crops Have Lost Their Allure”.  Still, corporate interests are pushing federal approval agencies to inundate the human and animal food chains with many more GMOs. [1]

There’s been a rather interesting rumor circulating around Monsanto and GMO foods for quite a while now and it is: In the Monsanto corporate dining room, only organically-grown foods must be served!  Can a whistleblower come forth to provide proof of that?  If that is factual, then that’s something not only the public must know, but all regulatory agencies dealing with approving their respective aspects of GMOs: the U.S. FDA, USDA and EPA!

In the meantime, Food Democracy NOW has a petition website going titled “Tell the EPA to Release ALL of Monsanto’s Hidden Data on Glyphosate and GMOs”.

Are you aware that “in 1985, the EPA’s own scientists declared glyphosate to be a Category C ‘possible human carcinogen’ after reviewing studies submitted by Monsanto during the original approval”?

However, there are photographs of two-year-old rats from GMO feed studies that resulted in massive tumors.  Monsanto’s studies presented for GMO approvals stopped at 90 DAYS, not the normal two-year-life-cycle of rats! 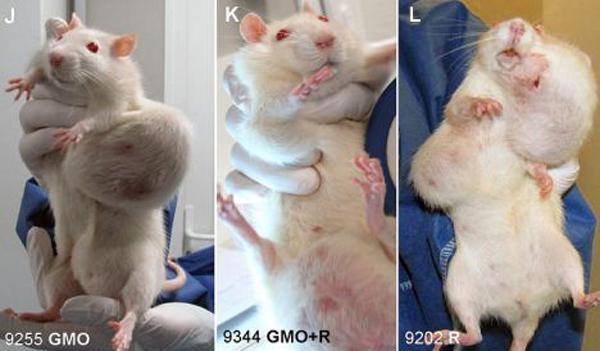 “With respect to the detection of potential unintended eﬀects in whole GM food and feed, it is unlikely that substances present in small amounts and with a low toxic potential will result in any observable (unintended) eﬀects in a 90-day rodent feeding study, as they would be below the no-observed-eﬀect-level and thus of unlikely impact to human health at normal intake levels.

Laboratory animal feeding studies of 90-days duration appear to be suﬃcient to pick up adverse eﬀects of diverse compounds that would also give adverse eﬀects after chronic exposure.”

However, “Seralini’s long-term study linking glyphosate to rat tumors was unfortunately retracted from the journal Food and Chemical Toxicology due to pressure from Monsanto lobbyists. The results of the study have since been republished in Environmental Sciences Europe.” [3]

Look what’s happened to food in Europe, which previously was relatively clean of GMOs!

In June 2015, EFSA issued a new guidance document on the information that companies need to provide when applying for renewed authorisation to import GM plants for food and feed into the European Union. The European Commission grants authorizations to place GM food and feed on the European market for a period of ten years. [4]

Could that impact your food shopping and buying practices regarding foods produced in Europe?  It certainly ought to affect what previously was considered GMO-free foods coming from European countries.

What do you think?

Aren’t consumers entitled to know what’s in the food we are eating, e.g., GMOs and how that food was grown or produced/manufactured?

Shouldn’t there be “reverse advertising” on all food labels, e.g., no GMOs or GMO-free?

Shouldn’t the PLU identity number “8” be mandatory for all foods containing GMOs or grown as GMOs? [5]

Won’t you please tell the EPA what you think about GMOs and sign the petition?  Thanks!