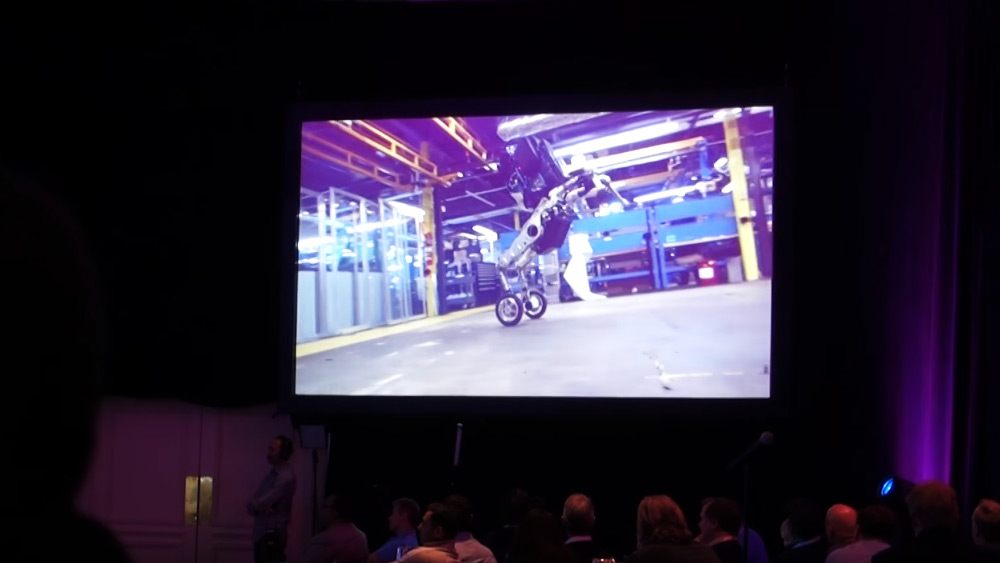 Boston Dynamics, a robotics company owned by Google’s parent company, Alphabet, has developed some amazing robots over the past few years, but none quite so “nightmare-inducing” as its latest creation, called “Handle.”

Handle hasn’t been officially unveiled to the public, but a group of investors were recently given a glimpse of its capabilities in a video presentation staged by company founder Marc Raibert. Footage of the presentation was captured by venture capitalist Steve Jurvetson and uploaded to YouTube, where it has since been viewed by more than 1.2 million people.

Handle uses a combination of wheels and legs to get around, and is remarkably agile – even frighteningly so. The robot is capable of jumping over obstacles and performing complex high-speed maneuvers without losing its balance. (RELATED: Find more news about robotics at Robotics.news)

“Raibert describes Handle as an ‘experiment in combining wheels with legs, with a very dynamic system that is balancing itself all the time and has a lot of knowledge of how to throw its weight around.’ He adds that using wheels is more efficient than legs, although there’s obviously a trade-off in terms of maneuvering over uneven ground. ‘This is the debut presentation of what I think will be a nightmare-inducing robot,’ says Raibert.”

To see Handle in action, fast-forward to 3:46 in the video:

The robot got its name from the fact that it was designed to handle objects, but it’s easy to imagine this sort of technology being assigned many other tasks than simply stocking warehouse shelves.

Boston Dynamics may be owned by Alphabet, but the company also receives funding from DARPA, which means that their bipedal, quadrupedal, and now 2-wheeled robots are definitely being designed with other purposes in mind.

Handle is capable of a great deal of autonomous movement and could conceivably be used by the military and law enforcement agencies, or for anti-terrorist and life-saving missions.

The company has already produced other nightmarish robots, such as “Big Dog,” a four-legged mechanical beast powered by a go-kart engine. It was noisy and somewhat terrifying to behold, but not nearly so much as Handle, which is more like the Terminator on a Segway – a clear leap in capability, and one indeed capable of inducing some disturbing dreams.

It’s fairly obvious at this point that robots will soon play a vital part in military and law enforcement operations, among many other applications, and there are growing concerns regarding ethics and human safety. (RELATED: Read GLITCH.news for more coverage of technology gone wrong.)

Isaac Asimov is famous for formulating the “Three Laws of Robotics,” which essentially instruct robots to obey and not harm humans or themselves. A real world version of robotics ethics has been recently drafted by the British Standards Institute in an effort to ensure the creation of only “ethically sound” robots.

“The document, BS8611 Robots and robotic devices, is written in the dry language of a health and safety manual, but the undesirable scenarios it highlights could be taken directly from fiction. Robot deception, robot addiction, and the possibility of self-learning systems exceeding their remits are all noted as hazards that manufacturers should consider.”

Robotics technology is advancing so rapidly and on so many different fronts – from tiny nano-robots to human-sized robots like Handle, and even larger ones  – that it’s simply impossible to predict how advanced they will be in another 10 or 20 years or what tasks they may be programmed to perform.

One thing is certain: robots will play an increasingly important role in our future daily lives and we can only hope that their impact will be a positive one overall. Let’s pray that the Terminator-ish nightmares induced by Handle are not a portent of things to come.