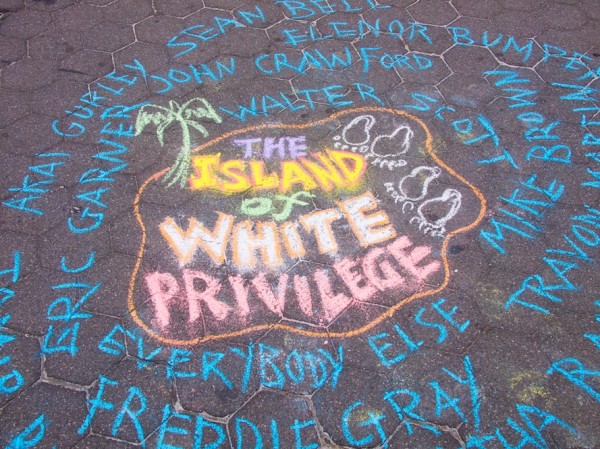 During my senior year of college, I remember one of my professors one day took the garbage bin and placed it on the table in front of the class. She then asked all of us to take out a piece of paper, crumple it up, and try to throw it into the garbage. Naturally, the students who were sitting closer to the front of the class generally made their shots, while the students sitting towards the back generally missed. This, she said, was how white privilege works. She explained that those sitting towards the front of class represented white people who had an unfair advantage in life over minorities, represented by those sitting in the back. (RELATED: Read about the consequences of teaching students about white privilege in school).

Students at Elizabethtown College in Lancaster County, Pennsylvania, are now walking around campus with white puzzle pieces pinned to their shirts. Why? Well, to think about and denounce their white privilege of course! (RELATED: How did the public respond when a white privilege tax was suggested?)

Not surprisingly, the campaign was launched by the Elizabethtown College Democrats. Aileen Ida, the president of the group, explained to The College Fix that “discussions about race are often perceived as being only open to people of color,” adding, “I think it is just as important for white people to partake in conversations about race.”

On the Facebook page for the campaign, which has since been taken down, the College Democrats stated that the effort was meant to force everybody “to think about racial issues people face daily.”

Boy, I sure am glad we have white puzzle pieces that we can pin to our shirts. Otherwise, how on earth would we remember things like race and diversity?

While liberals will never admit it, the entire purpose of the white privilege movement is to silence or shame anyone that is not of color. They can say it’s about promoting diversity, and they can say that it’s about encouraging people to have discussions about race, but really, its nothing more than a way to accuse white people of doing something wrong based solely on something that they can’t control.

As the argument goes, our society (or “the system,” as liberals usually call it) is structured in a way that puts white people at an unfair advantage over blacks. As evidence, they tend to point to things such as the criminal justice system, economics or the apparent lack of diversity in America’s highest institutions. All of these points have been largely debunked in the past, making them nothing more than liberal rhetoric and propaganda. Go figure.

But the larger issue here has more to do with the victim mindset than anything else. Thanks to the liberal left, minorities in this country are constantly told that they have it worse than whites do. Their heads are filled day in and day out with lies about the American system, lies about the legal process and lies about white people. And if you wake up each and every day thinking that you are a victim and that there is absolutely nothing you can do about it, then life is going to be dull and depressing.

Everyone goes through hardships in life, not just minorities. Segregation and slavery were absolutely horrific, but its time to move on as one people and as one nation.