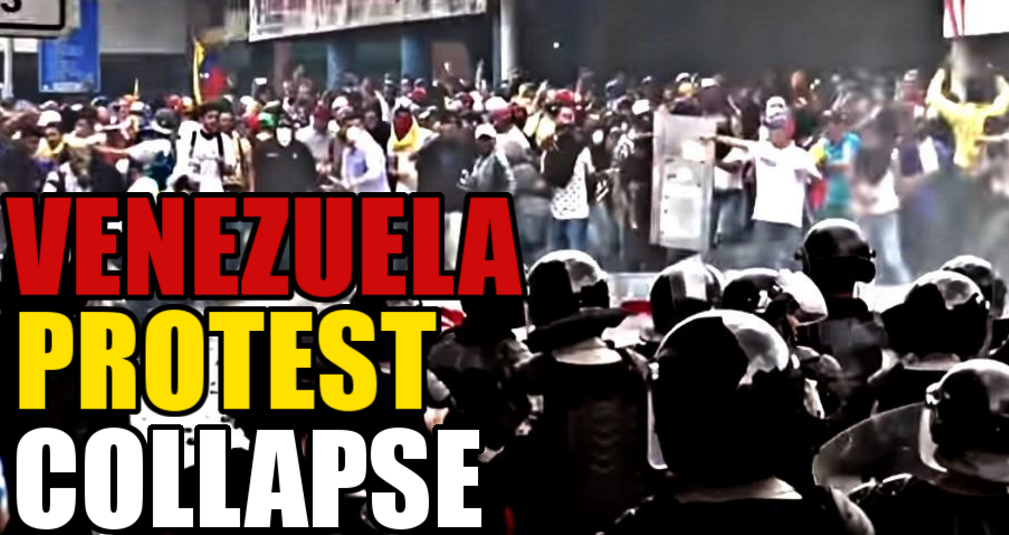 The so-called “mainstream media” fails Americans so many ways each and every day, it’s difficult to keep track, and one of those failures involves the lack of coverage of the latest failure of Socialism: Venezuela.

Unless you’re reading, watching and listening to alternative media — which has been all over this story for years — you wouldn’t know, for instance, that the country is starving to death, ordinary citizens can’t even obtain basic foodstuffs and other necessities to live, hospitals don’t have medicines, and the streets of most major cities are filled daily with demonstrators who are clashing with police because they’ve run out of hope.

What’s more, gasoline prices are out of reach for most Venezuelans, when they can even find any, despite the fact that the country has the world’s largest proven oil reserves. (RELATED: Socialism Sucks: Venezuela Runs Out Of Gas, Despite Having The World’s Largest Oil Reserves)

And yet, the mainstream media has barely covered the disaster that is Venezuela, and why? Because most mainstream reporters and editors are big fans of socialism, which is truly head-scratching, given that time and again, it has proven to be an unworkable economic model that always ends in the empowerment of government and impoverishment of the people.

An analysis of the broadcast networks’ Venezuela coverage by the Media Research Center tells the story: Despite the fact that more than 50 people have been killed in clashes with government-aligned forces, inflation will surpass 700 percent and unemployment 25 percent this year alone, “the Big Three evening newscasts have tried to pretend this crisis does not exist, offering virtually no coverage as the situation has deteriorated over the past four years,” the center reported.

The analysis found that between March 2013, following the death of former dictator Hugo Chavez — the man who brought about the socialist “revolution” — through May 29, 2017, ABC, NBC, and CBS only aired 25 stories about Venezuela’s mounting problems, for a grand total of less than 29 minutes of coverage, or around 30 seconds per month during the timeframe studied.

Meanwhile, during the same period, the networks covered about 50,000 other stories on different topics, many of which were likely politically biased (against conservatives) and pro-Obama/Democrats.

Also, the center found, the networks have been loathed to use the term “socialist” in the limited coverage, though the country’s current dictator, Nicolas Maduro, proudly declares that his is a socialist government. In addition, networks have not leveled any criticism of Left-wing Democrats and their allies in the entertainment industry who have lauded both Chavez and Maduro over the years.

Here are some clear examples of the bias:

— In September 2013 Maduro used a blackout that left 70 percent of Venezuela without electricity as the impetus to crack down even harder on political opponents, but the networks didn’t cover this at all.

— Two months later, in November, the National Assembly, which was at the time controlled by the socialists, granted Maduro “emergency” authority that allowed him to bypass the legislative body and rule by decree. Since then he has done precisely that, declaring emergency after emergency. But again, no network coverage of a budding dictatorship in a once-wealthy country in our own hemisphere. (RELATED: Venezuela’s Socialism Has Led To This: Food Price Inflation Hits 180 Percent, Forces Eggs To $150 A Dozen)

— The opposition party managed to wrest control of the National Assembly from the socialists in December 2015, winning 112 seats compared to 55 for the socialists, and yet no coverage from the networks.

— Last September, large, widespread protests began in earnest, with hundreds of thousands of Venezuelans screaming for Maduro to stand for a recall vote. Again, no stories.

Mind you, each phase of rising authoritarianism by Maduro and the country’s legislative and judicial bodies has followed massive opposition to the continuation of failed socialist policies.

But because our mainstream media is in ideological lockstep with one of the most oppressive economic models ever devised, a large segment of our population knows nothing about the Venezuela nightmare.