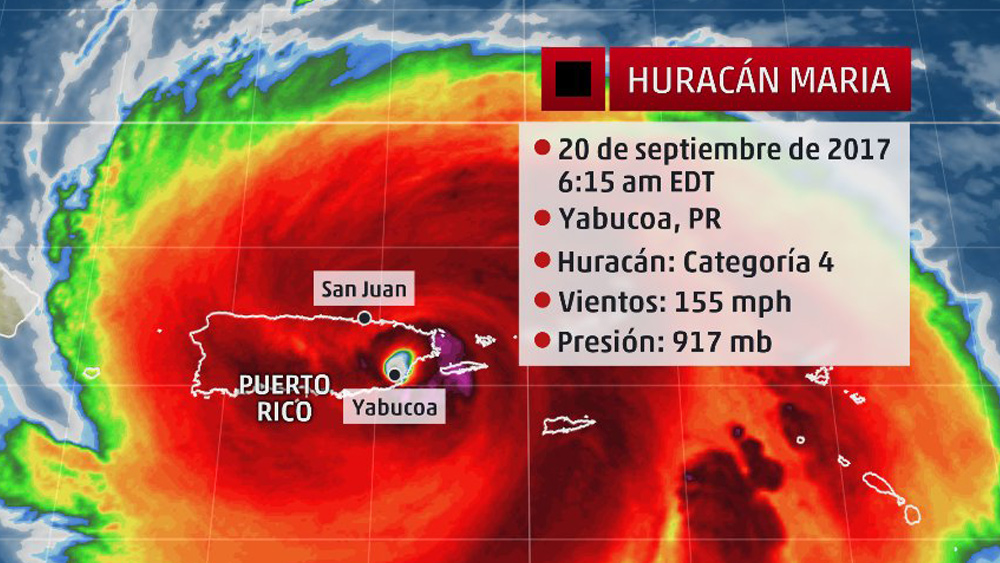 Puerto Rico has just received a direct hit from Hurricane Maria, a category-4 storm with 155 mph winds at its core. The “weather bombing” of the bankrupt U.S. territory of Puerto Rico is no random event, according to Geoengineering Watch analyst Dane Wigington. In an interview conducted yesterday — to be posted on Natural News in just a few days — Wigington detailed the evidence for “weather weaponization” technology that allows powerful nations to literally steer superstorms into their intended targets.

“Local media is reporting that the Fajardo, Espíritu Santo and Rio Grande de Loiza rivers have all broken their bank,” reports the UK Express. “Terrified residents took to Twitter to reveal their accounts of eerie tsunami sirens blaring through the storm, signalling a possibly deadly storm surge of up to nine feet.”

Millions of Puerto Ricans have lost power. “Hurricane Maria’s ferocious winds continued strafing Puerto Rico late Wednesday morning, shearing off roofs, cutting power to nearly the entire island and pushing rivers over their banks,” reports the Miami Herald. Rosita Galguerra is also quoted by the paper, saying, “The house is trembling – and my house is made of concrete with a concrete roof. The winds are like out of a horror movie and it’s gusts, gusts, gusts. The island is going to be completely destroyed.”

Wigington says the string of powerful hurricanes — Harvey, Irma, Maria — specifically targeting the highest density population areas of multiple states is no coincidence and not based on random chance.

In the interview, Wigington told me that he believes various “camps” of nations and globalists have obtained weather weaponization technology over the years, via “weather weapons proliferation” that’s similar to the proliferation of nuclear weapons. Several different global groups now possess the ability to “steer” weather systems directly into intended targets, says Wigington.

These guided hurricanes are “weapons of mass destruction,” he says, because they kill indiscriminately and destroy civilian infrastructure. Look at the precise population density landfall location of Maria as it hits Puerto Rico: Although he didn’t state this directly in the interview, it appears that the United States is being targeted precisely because Donald J. Trump is President. The apparent goal is to cause maximum economic destruction — a goal that was meticulously carried out by former president Barack Obama, who deliberately sought to destroy the United States of America from within by sowing cultural hatred, collapsing border security, destroying job opportunities and putting tens of millions of Americans on government welfare programs. The economic destruction that Obama began, the thinking goes, is now being continued through weather weapons and other nefarious means to destroy the pro-America Trump presidency that seeks to restore America’s economic independence.

The insidiousness of weather weapons, Wigington explains, is that its victims think the weapon is a “natural event,” so the very people being targeted and bombarded with a weapon of mass destruction have no idea they’re being attack at all.

Everything is engineered: The food, the water, the news, the money supply…

Many people find it difficult to believe that weather systems can be engineered, yet they readily accept the reality that the food supply is genetically engineered. Municipal water systems are engineered and altered with fluoride and chlorine. The global money supply is engineered and heavily manipulated by central banks. All the news that appears in the corporate-run media is, of course, engineered to broadcast outright lies such as “the Russians stole the election.”

Human biology is engineered and altered by prescription pharmaceuticals, and even brain function is altered and engineered by psychiatric drugs. Heavy metals such as uranium and plutonium have been engineered into atomic weapons, so why is it so difficult to believe that weather systems could also be engineered through advanced technology? Mainstream scientists openly discuss methods of altering the atmosphere to block sunlight, by the way. For example, Harvard scientists have been touting their geoengineering experiments to block the sun.

Catch my full interview with Dane Wigington in the next few days on NaturalNews.com. Whether you believe Wigington’s explanations or think weather modification is impossible, you’ll find the conversation intriguing and thought provoking. Also see Geoengineering.news for more coverage.