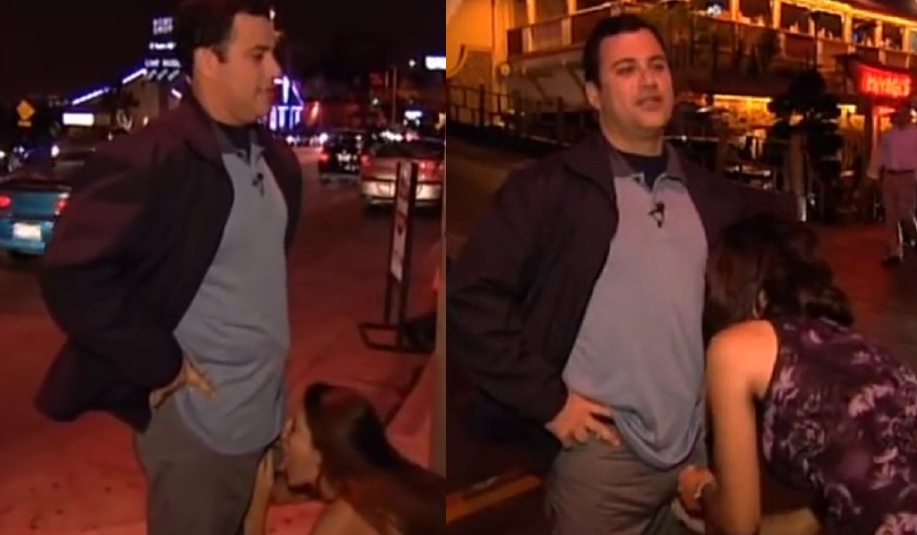 As you may recall, many mainstream leftists had a field day when the infamous Access Hollywood “Trump Tape” was released, which contained audio of the President engaging in off-the-cuff locker room talk with Billy Bush more than a decade prior to his election. But all of a sudden evidence is emerging to show that many of these same anti-Trumpers have engaged in similar crude talk – and actually far worse, such as in the case of late night talk show host Jimmy Kimmel, who back during his days on The Man Show actually petitioned women on the street to feel his crotch and “guess what’s in his pants” for a laugh.

Video footage from way back when of Kimmel standing on a street corner embarrassing women by making lewd references to his private parts and even asking them to “put their mouths on it” are a far cry from his sanctimonious posture today now that Donald Trump is president. Kimmel has repeatedly shilled for leftist issues like gun control and compulsory vaccination, in the latter instance mocking the parents of vaccine-injured children.

On a more recent occasion, Kimmel got into something of a Twitter “war” with Donald Trump Jr. over the left’s ties to Hollywood producer and studio executive Harvey Weinstein, who had been a vocal supporter of failed Democratic candidate Hillary Clinton. Weinstein, as many now know, has a sordid history of sexually harassing and assaulting young Hollywood stars as part of their break-in into the “biz.” Kimmel apparently didn’t like Trump Jr.’s insinuations, and decided to turn the whole thing around on the President.

In response to a tweet by Donald Trump Jr. asking, “Thoughts on Harvey Weinstein? #askingforafriend,” followed by a link to Jimmy Kimmel’s Twitter page, Kimmel had this to say in response: “You mean that big story from the failing, liberal, one-sided @nytimes? I think it is disgusting,” of course referring to the contents of the infamous Trump Tape.

Weinstein, Kimmel, and how many more?

What Kimmel clearly failed to realize at the moment when he posted this response is that he has his own dirty laundry from years past. Video footage of Kimmel making inappropriate comments to female strangers is no better than what the President said – in fact, some might say that it’s worse, seeing as how the segment was broadcast on television to millions of viewers.

Check out the video clip for yourself. You’ll see Kimmel joking about his stuffed crotch and telling at least one woman to get up close and personal. It is a disgusting gag that, quite ironically, implicates Kimmel as hailing from the same ilk as other sexual predators like Weinstein that seem to be prolific throughout the Hollywood entertainment industry.

Of all people, Jimmy Kimmel should know that those who live in glass houses are better off not throwing stones. He clearly has his own skeletons in the closet that reveal him to be no better than those he accuses. Regardless of whether or not it was a “joke,” Kimmel’s little gag about women fondling and kissing his crotch is apparently something he forgot about when he decided to take another pot shot at the President.

If President Trump is no different than Harvey Weinstein in your mind, then what does that make you, Jimmy Kimmel? First off, it makes you a hypocrite. Secondly, it makes you guilty not only by association – you are a Hollywood big shot, after all – but also in word and deed. You sexualized women on numerous occasions and got paid for it, after all.