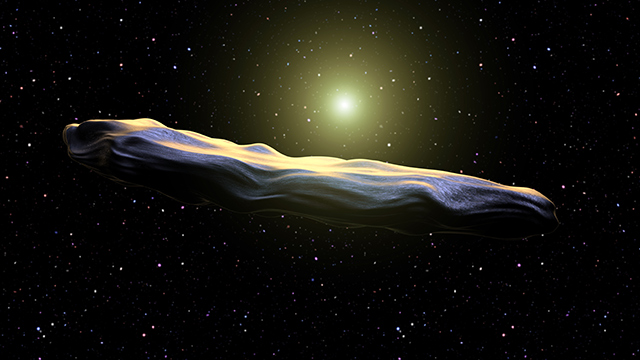 Even as the very first interstellar visitor to our solar system bids us farewell, astronomers are already planning a warmer welcome for the next such guest. According to a Space.com article, the next asteroid to go our way will be met by a spacecraft that will shoot it and collect the resulting debris for analysis.

The asteroid ‘Oumuamua is the first visitor from another star that humans know of. Its name means “a messenger from afar arriving first” in Hawaiian.

It was first spotted by the Panoramic Survey Telescope and Rapid Response System (Pan-STARRS) in Maui, Hawaii on October 19, 2017. Longer than the biggest aircraft carrier, ‘Oumuamua was also spinning uncontrollably.

Astronomers reported that the asteroid swung around the Sun on September 9, 2017. It came closest to Earth during October 14. The path of the tumbling celestial body suggested that ‘Oumuamua originated from another star system.

Astronomers were initially baffled by the varying colors on the asteroid’s surface. They were also at a loss as to how it left its home in the first place. Analysis of ‘Oumuamua suggested that it formed near its parent star. It should have been anchored to that star by gravity. These and other questions will go unanswered as the interstellar object was last seen heading away from Earth at nearly 112 times the speed of sound.

‘Oumuamua is one of quadrillions of interstellar asteroids out there

Researchers from Yale University (Yale) considered the possibility that similar interstellar visitors will drop by our solar system. Their first step was to find out if humans could detect the next guest. Then they looked into the possibility of sending a spacecraft from Earth to reach such an asteroid.

Earlier studies proposed that young stars spit out many asteroids during their formation. The combined mass of these objects could range from 0.001 percent to 0.01 percent of Earth.

‘Oumuamua-type asteroids would vastly outnumber stars like our Sun. The researchers estimated the number of such objects that could be spotted by the unfinished Large-Scale Synoptic Survey Telescope (LSST) in Chile.

Once it is finished in 2022, the massive telescope could spot 1.6 percent of all approaching interstellar objects within 930 million miles (1.5 billion km) of the Sun.

“When LSST comes online, we will have the opportunity to observe something up close that formed around another star, without having to leave the solar system,” reported Darryl Seligman, a Yale researcher and lead author of the study.

Future spacecraft will fire impactor at interstellar visitor and get debris

The next step for the Yale research team was to design the intercept mission for the next interstellar visitor. They decided on a space probe similar to NASA’s Deep Impact spacecraft, which investigated the comet Tempel 1 in July 2005. The planned space probe will approach the asteroid and hit it with an impactor unit. It will collect and study the debris to find out what the asteroid was made of. (Related: NASA’s OSIRIS-REX mission will examine samples from an asteroid, seeking clues to the origin of life.)

This approach needs less rocket fuel than a mission that tries to catch up to an interstellar object. Furthermore, the Yale researchers believe any interception missions would be restricted to targets within 93 million miles (150 million km) of the Sun.

“This is somewhat intuitive — the closer an interstellar object gets to the Earth, the less space the rocket has to travel to intercept it,” Seligman explained regarding these relatively close missions.

Seligman’s team chose the Falcon Heavy rocket built by SpaceX as their launch platform. They expect an interstellar visitor to come within reach every 10 years.

Learn more about our solar system – and its interstellar visitors – at Space.news.