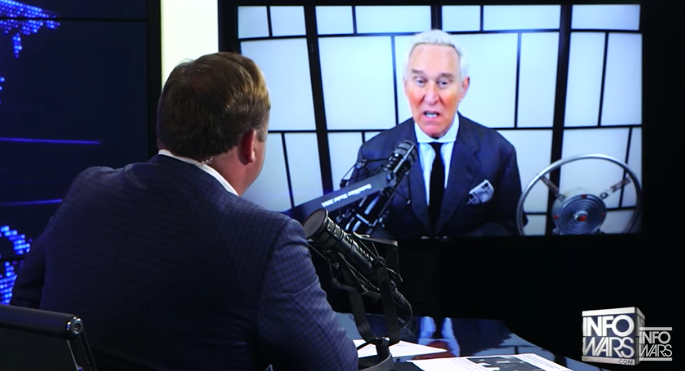 In a video released on Sunday, former Trump confidant Roger Stone of Infowars talked about what appears to be another FBI informant attempt to create fake Russian ties inside the campaign of then-GOP presidential nominee Donald Trump.

In the video, Stone says he has sent a letter to House Intelligence Committee chairman Devin Nunes, R-Calif., informing him of the infiltration attempt and providing details.

Stone said that in May 2016, when it looked like Trump would indeed be the shoo-in Republican nominee, he was approached by a man who claimed to be Henry Greenberg saying he had “valuable information on the Clintons.”

The former Trump campaign aide said that he and Greenberg spoke for about 20 minutes when the man said the information on the Clintons was expensive — it would cost $2 million.

Stone said he declined, noting that he didn’t have that kind of money and “even if I did, I don’t pay for political information.” He said Greenberg laughed about that and noted that he didn’t want Stone’s money, he wanted “Donald Trump’s money.”

Trump doesn’t pay for information either, Stone said, which ended the meeting.

Stone says he has since learned that Greenberg is actually a Russian national who is a longtime asset — an informant — for the FBI. Imagine that.

According to the letter sent to Nunes by Grant J. Smith, Stone’s attorney, “Based on information recently uncovered about Mr. Greenberg’s true identity which has been provided to the HPSCI (House Permanent Select Committee on Intelligence), he has a well documented extensive criminal background and for years acted as an FBI informant.” (Related: Not a single Democrat has so far denounced Obama’s “Spygate” violation of the Trump campaign … because Leftists advocate “secret police” tactics.)

A spy, in words Deep State actors, Democrats, and former Obama officials don’t like to use.

“How crazy is the Russian?” wrote Caputo, according to the message which was reviewed by the Post. Stone replied that Greenberg wanted “big” money and that the meeting was a “waste of time.”

“The Russian way,” Caputo responded. “Anything at all interesting?

Two years later, the brief meeting has become part of special counsel Robert Mueller’s never-ending witch hunt into “collusion” between the Trump campaign and Russia — though it is imminently clear by now that most of the contact between outlier Trump campaign officials and ‘Russia’ happened because the FBI set it up — the same FBI that was corrupted by Obama and used as a political weapon against a rival presidential campaign.

Interviews and additional documents show that Greenberg has at times used the name Henry Oknyansky. Under that name, he claimed in a 2015 court filing related to his immigration status that he had provided information to the FBI for 17 years. He attached records showing that the government had granted him special permission to enter the United States because his presence represented a “significant public benefit.”

The paper noted that there’s no evidence indicating that Greenberg was working on behalf of the FBI when he made contact with Caputo and Stone, but given the nature of his meeting and the fact that we know the FBI used others to spy on the Trump campaign, what other rational explanations are there?

And of course, Mueller doesn’t even appear to be interested in this exchange.

Stone and Caputo are confident, given the news about other spies and given the abject bias among FBI officials against Trump that was exposed by Justice Department IG Michael Horowitz’s report, they were being targeted by the Deep State. There’s no good reason not to believe them.

Read more about this ongoing farce at DeepState.news.