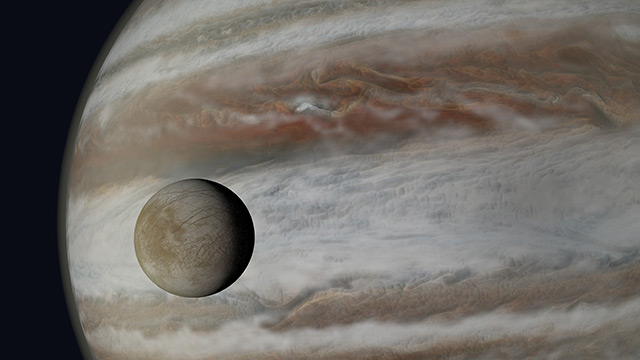 Revisiting decades-old data from an earlier mission to Jupiter reveals that the Galileo spacecraft flew into a massive plume of water vapor from the planet’s icy moon Europa. An article in NASA suggests the plume could mean the Jovian satellite is habitable or even hosting alien life.

Galileo flew past Europa in 1997. During that close fly-by, the NASA probe detected a brief and localized anomaly in the moon’s magnetic field. The incident remained a mystery until recent times when a new generation of computer models processed the old data.

The possibility of water plumes first came up in 2012, when NASA released ultraviolet imagery of Europa taken by the Hubble Space Telescope. The new analysis of the Galileo data is considered to be strong supporting evidence for that.

University of Michigan (UM) researcher Xianzhe Jia led the efforts to decipher the old anomaly. He also served as co-investigator for some of the instruments aboard the Europa Clipper, which will visit the Jovian moon in the near future. (Related: Alien life may exist in Jupiter’s moon Europa and other frozen worlds.)

Jia got the idea to revisit the Galileo data from a presentation by Melissa McGrath of the SETI Institute. A fellow member of the Europa Clipper science team, McGrath briefed the team about the Hubble imagery of their target.

The mention of the moon reminded Jia of Galileo’s 1997 flyby. The space probe had passed within 124 miles (200 kilometers) of Europa.

After going over the decades-old data, the UM research team realized that Galileo’s High-Resolution Magnetometer instrument had picked up something strange during the fly-by. They compared it to the recorded behavior of water plumes on Saturn’s icy moon Enceladus, where the material turns into plasma that makes a very visible effect on the celestial body’s magnetic field.

The ionization effects of the plumes of Enceladus turned out to be similar to the brief, localized bend in Europa’s magnetic field that Galileo encountered.

Furthermore, Galileo also carried a Plasma Wave Spectrometer. The PWS was an instrument that analyzed the plasma waves from charged particles in the atmospheric gases of Europa.

Jia’s team examined the data from that device as well. The plasma wave readings supported the magnetometer data regarding the presence of a plume.

The team also used the readings from both instruments, as well as the Hubble imagery to build a new 3D computer model. This model mimicked how plasma would interact with the celestial bodies of the solar system.

Again, the UM computer model of Europa with a simulated plume matched the magnetic field and plasma readings taken by Galileo.

“There now seem to be too many lines of evidence to dismiss plumes at Europa. This result makes the plumes seem to be much more real and, for me, is a tipping point. These are no longer uncertain blips on a faraway image,” explained Robert Pappalardo, a researcher at NASA’s Jet Propulsion Laboratory (JPL) who is also working on the Europa Clipper mission.

Europa Clipper will follow up on Galileo’s findings. Set to launch in 2022 at the earliest, the new space probe will take up orbit around Jupiter and pass by its namesake many times at high speed.

This would give the probe many chances to take a sample of a water vapor plume from Europa.

“If plumes exist, and we can directly sample what’s coming from the interior of Europa, then we can more easily get at whether Europa has the ingredients for life. That’s what the mission is after. That’s the big picture,” stressed Pappalardo.

Read more articles about science missions to planets and moons in our solar system at Space.news.