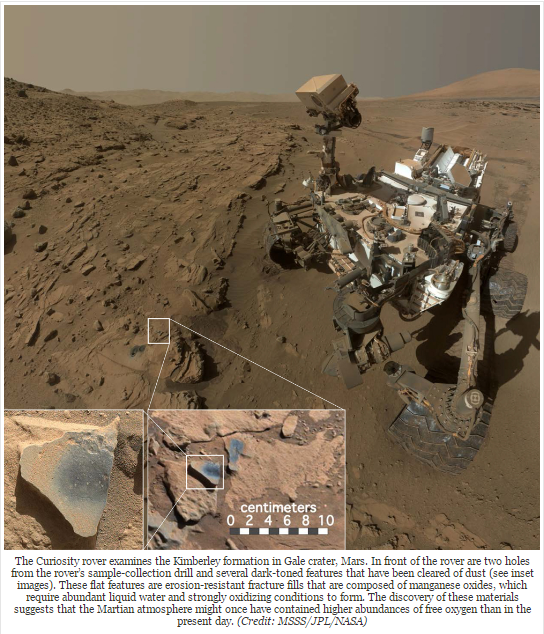 In June 2018, the unstoppable Curiosity rover uncovered preserved organic compounds in the Gale crater of Mars. The momentous find led an interplanetary expert to argue that future missions bring experiments and instruments for identifying bio-signatures, an article in News Wise reported.

“The presence of preserved organics, carbon-hydrogen containing, compounds at the Gale crater site is a significant discovery,” said Jonathan Lunine of the Cornell Center for Astrophysics and Planetary Science. “It shows that, if life formed once on Mars, and we do not know whether or not it did, the clues to its presence might still exist there in organic molecules.”

Lunine is a veteran member of the Saturn Cassini project, a major contributor of the Juno space probe mission to Jupiter, and a proponent of manned exploration missions to Mars. He believed future missions must be able to recognize bio-signatures, the unmistakable signs of life.

NASA is currently preparing its Mars 2020 mission. The new rover is based off Curiosity but will feature different instruments. It will also carry a core drill that can take underground samples. (Related: The search for life on Mars by the ESA reaches important milestone as ExoMars Rover prepares for its “shake and bake”.)

While exploring the ancient Gale Crater on Mars, NASA’s Curiosity rover caught a good whiff of methane in the air. Methane contained carbon and is considered a simple organic molecule.

At first, the amount of methane in the atmosphere and in an area appeared to change at random. NASA researchers from the Jet Propulsion Laboratory (JPL) eventually realized that methane levels in the Martian atmosphere followed a seasonal cycle.

More methane could be found in the air during the Martian summer. The realization helped in tracking down the origins of the molecule.

Based on their analysis of the fluctuations, the methane came from underground sources. The lighter-than-air gas traveled through fissures and pores in the ground in order to reach the surface.

During the cold winter season on Mars, the methane adhered to the dusty ground. When it got warmer during the summer, the methane would be free to enter the atmosphere, where it could be detected by Curiosity’s sensors.

Evidence of ancient Martian life might be better preserved than expected

Furthermore, the clay of the crater contained an even greater treasure: The most complex organic molecules ever found on Mars, much more complex than mere methane gas and well-preserved despite their age.

While the molecules could have originated from meteorite impacts or been belched out by volcanic vents near Gale Crater, there is a chance they came from living organisms. The molecules may have served as a food source for Martian microbes or might even be the remains of those ancient life forms.

What is even more encouraging is that the organic molecules survived for so long on the dry lake bed. There is the possibility of finding the remains of Martian lifeforms in a similar state of excellent conservation.

“Because there is a possible connection between organic molecules and life, understanding where there are organic molecules and how they are conserved is very, very important as we go into figuring out how to search for life,” says Jennifer Eigenbrode, the leader of the Goddard Space Flight Center research team that discovered the complex organics on Mars.