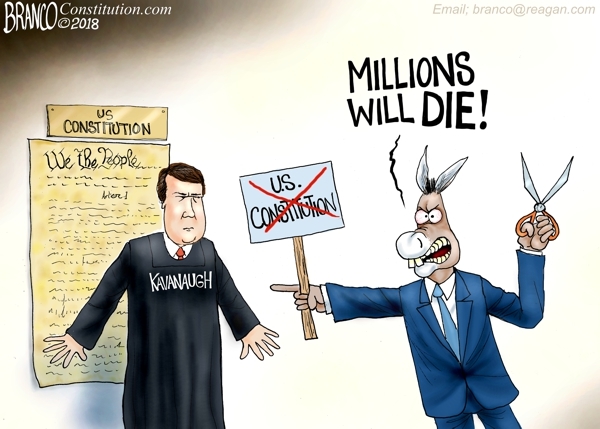 Democrats continue in their attempt to turn our political process into something more like mob rule, where the mob that shouts the loudest and the angriest and is the most violent, ‘wins’ the debate.

As the Senate Judiciary Committee opened its session Tuesday morning to consider whether to advance POTUS Donald Trump’s most recent U.S. Supreme Court nominee Judge Brett Kavanaugh to the full Senate for an up-or-down confirmation vote, Democrats on the panel and in the hearing room threw away all manner of decorum and attempted to hijack the proceedings.

Democrats are angry they don’t have a majority and, thus, do not get to make decisions like which SCOTUS nominees to approve and which ones to toss back into the judicial heap.

They don’t like it that a president from their party isn’t in the Oval Office making judicial and SCOTUS selections.

They don’t like it that their party threw away the “filibuster rule” for judicial nominees in 2013, when the vindictive schemer, former Senate Majority Leader Harry Reid of Nevada, decided that getting President Obama’s Left-wing activists appointed to the federal bench was more important than long-standing Senate tradition.

And they sure hate the fact that Donald Trump is president and that Hillary Clinton (or anyone else) isn’t.

As such, they’ve decided to become the party of the mob and blow up our institutions (the FBI and Justice Department come to mind) and our system of government just because they can’t “win” with their increasingly deranged constituency.

No sooner than Judiciary Committee Chairman Charles Grassley, R-Iowa, opened Kavanaugh’s hearing than he was interrupted by Sen. Kamala Harris, D-Calif., who complained that Democrats were not given access to enough of Kavanaugh’s prior work in government and from the federal bench and thus did not have sufficient time to pore over details of his decisions, as Breitbart News documented.

That said, Democrats have been demanding access to all of Kavanaugh’s works, which fill dozens of boxes and are said to number more than a million documents. And in truth, the objective isn’t to go over Kavanaugh’s work as much as it is to delay his appointment to the high court before the next session begins in October or, preferably, derail it altogether. (Related: As Left explodes over Trump SCOTUS pick Kavanaugh, let’s remember that unqualified Elena Kagan was put on the court by Obama for reliable liberal vote.)

Sen. Cory Booker, D-N.J., tried to claim that since POTUS Trump is currently under investigation for “Russian collusion” and ‘obstruction’ by special counsel Robert Mueller, he should lose his presidential right to appoint people for judicial openings. But Republicans on the panel smacked that down, noting that President Bill Clinton was ‘allowed’ to appoint Stephen Breyer to the Supreme Court when he was under investigation by then-Independent Counsel Kenneth Starr.

Democrats on the panel aren’t interested in hearing what Kavanaugh has to say. They’re not interested in his ‘record’ because they already know what it is (he’s a staunch constitutionalist and Democrats only love the Constitution when it benefits them). And they certainly aren’t interested in decorum or fairness. Knowing they don’t have the votes to stop Kavanaugh’s eventual confirmation, all they were doing was playing to their perpetually outraged base, giving supports a show and pretending like they have integrity.

But the most outrageous spectacles came from the unhinged Leftists in the audience, many of whom shrieked and shouted and had to be physically removed from the hearing room by police and security.

CLIP: @SenJudiciary #Kavanaugh hearing begins with protests from the public and @SenateDems.

And mind you, this egregious and classless behavior occurred in front of Kavanaugh’s wife and two small daughters, the latter of whom will grow up wondering if the Democratic Party has any adults in it.

The Democratic Party has devolved into a shell of its former self. The only thing Democrats care about is power, period, and they’re willing to burn our system down in order to steal it.

Read more about the pathetic nature of libtard Democrat behavior at Libtards.news.