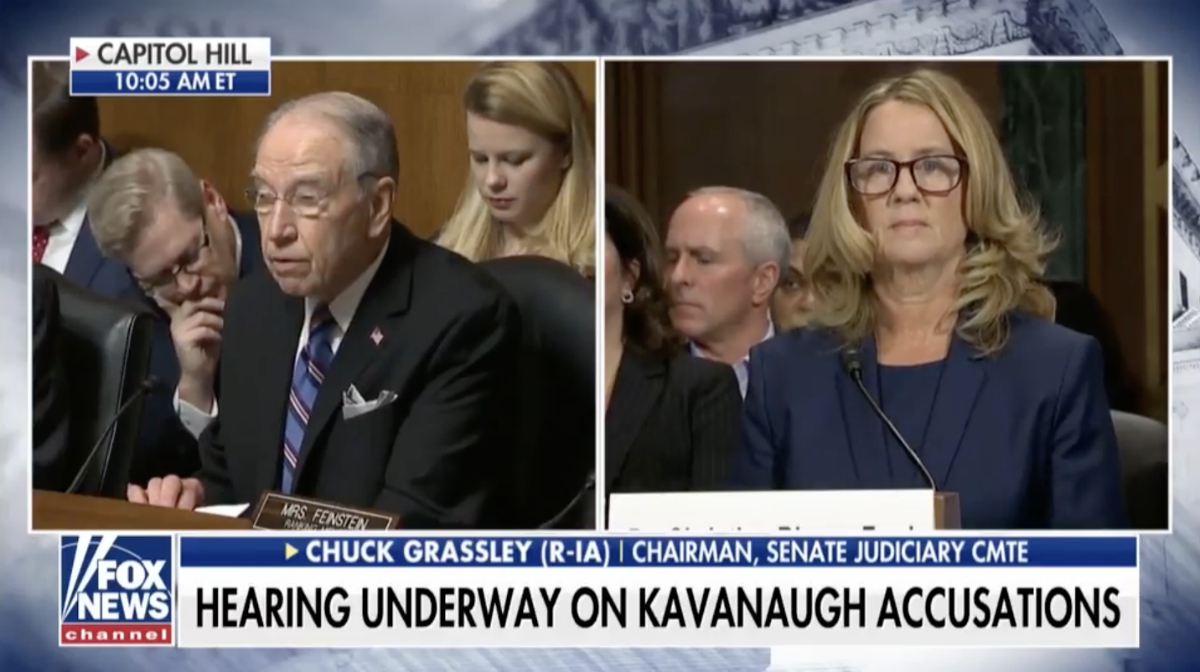 Democrats continued the destruction of our political system on Thursday by ensuring that a woman whose unsubstantiated accusations of sexual assault from 35 years ago against Judge Brett Kavanaugh were aired publicly for the world to see.

But when all was said and done, not only were Dr. Christine Blasey Ford’s accusations still uncorroborated, some of the details she provided didn’t add up while others were not remotely believable.

As reported by The Western Journal, one of the earliest errors she made had to do with details surrounding how she got to and left the alleged party where she was allegedly accosted by Kavanaugh while a classmate, Mark Judge, watched a door and looked on.

“She said she often spent time in the summer at the Columbia Country Club pool in Chevy Chase (Maryland), where in those pre-cellphone days, teenagers learned about gatherings via word of mouth,” the Post reported, The National Sentinel noted. “She also doesn’t recall who owned the house or how she got there.”

And yet, during questioning Thursday by Rachel Mitchell, chief of the Special Victims Division in Phoenix where she serves as a special prosecutor, Ford gave a different answer:

During the hearing, Mitchell began to ask a series of questions regarding the night of the alleged assault.

She started off by bringing out a large map with the area in which the assault allegedly happened and asked about the distances between her house and the house where the alleged assault happened. Ford described it as being about a 20-minute drive from her parent’s house.

Mitchell then turned the questioning to ask about how she got to and from the gathering at the house that night.

“Would it be fair to say that somebody drove you somewhere either to the party or home from the party?” Mitchell asked, to which Ford responded, “Correct.” Ford said she was only 15 at the time and therefore not old enough to drive.

There were more inconsistencies. As noted by Breitbart News, Ford – according to published reports – claimed that she has a ‘fear of flying.’ When asked about it by Mitchell, she said she initially hoped that the Senate Judiciary Committee could come to her at her home in California, but realized that was an “unreasonable” request.

That said, Ford was in the Delaware area in mid-August for a vacation – and didn’t seem to have the same problems with flying then as she purported to have when it came to flying in for testimony – or for her job as a consulting professor, or for vacation to tropical locations like Tahiti.

“It’s easier for me to travel going that direction when it’s a vacation,” she said.

Dr. Ford On Fear of Flying: "It's easier for me to travel going that direction when it's a vacation" pic.twitter.com/sNRmQzx0IU

“I’m no psychology professor but it does seem weird to me that someone could have a selective fear of flying. Can’t do it to testify but for vacation, well it’s not a problem at all,” Donald Trump Jr. tweeted.

I’m no psychology professor but it does seem weird to me that someone could have a selective fear of flying.

Can’t do it to testify but for vacation, well it’s not a problem at all.

Also, in another odd admission, Ford claimed that she could not remember details about a polygraph test she took earlier this summer. Specifically, she said she didn’t know who paid for it or whether she was videoed and recorded during the session (Senate Judiciary Committee Republicans had requested the video and audio of the session, but Ford’s lawyer refused to hand them over).

Eventually, her attorneys said they paid for the test, “which is routine,” but the inability to ‘remember’ if she was recorded was odd.

"Let me put an end to this mystery: her lawyers have paid for her polygraph," attorney for Dr. Christine Blasey Ford says. "As is routine." https://t.co/2YmzwxEUgt #KavanaughHearings pic.twitter.com/FWDktRqkUv

Read more about the Democratic hoax against Judge Kavanaugh at Hoax.news.