Hawaii Sen. Hirono too stupid to understand the meaning of the term “corroboration” … why is she a senator, again? 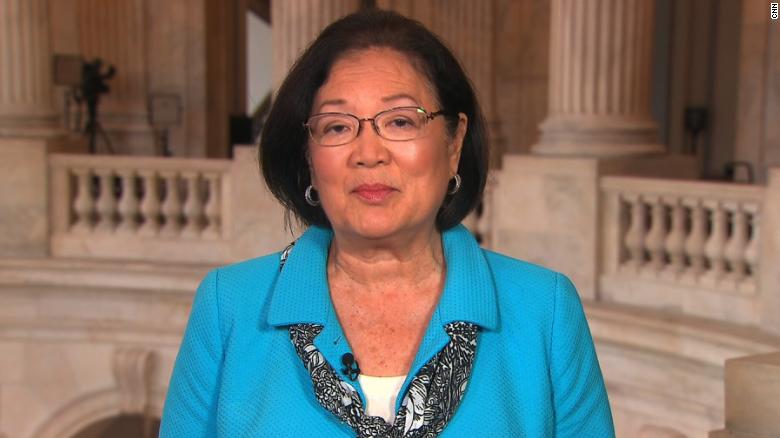 Democratic Sen. Mazie Hirono of Hawaii tried on Sunday to claim that accusations of sexual assault against Justice Brett Kavanaugh were legitimate and “corroborated” while his denials were not.

Hirono, whom hardly anyone outside of her home state had heard of until she began exploiting the Kavanaugh accusations for political gain, was on CNN’s “State of the Union” with host Dana Bash Sunday, where she stated that there was no corroborating evidence whatsoever to support Justice Brett Kavanaugh’s denial that he sexually assaulted Christine Blasey Ford 35-plus years ago when both were in high school.

Meanwhile, she also claimed that there is corroborating evidence to Ford’s claims.

The Daily Wire reported that Hirono said anyone watching Ford’s testimony before the Senate Judiciary Committee earlier this month “would conclude that she was being truthful” because she “recollects with 100 percent accuracy…that Judge Kavanaugh, Brett Kavanaugh assaulted her.”

“There was no corroboration on Brett Kavanaugh’s bald assertion that he didn’t do it, because the people that the FBI interviewed, which was a — just a small number of the dozens that they should have interviewed, they all said that they have no recollection,” Hirono continued. “But, on her side, there was corroboration, because she had talked about this assault to her husband, to others before Brett Kavanaugh was ever nominated to the Supreme Court. She took a lie-detector test. Corroboration was there.”

The phrase, “I don’t think you know what the word ‘corroboration’ means” comes to mind.

The fact is, Hirono’s claim is 100 percent false. According to a post-interview report by special victims prosecutor Rachel Mitchell, who questioned Ford during her recent testimony, no corroborating evidence whatsoever could be found to support her allegations. As she noted, all witnesses Ford claimed were present during the alleged assault “either refuted her allegations or failed to corroborate her.”

But even the absence of evidence and actual corroboration shouldn’t matter, Hirono insisted, because a hearing “is not a court of law.” (Related: POTUS Trump to Kavanaugh: ‘I apologize, sir, on behalf of our nation’.)

Democrats seek to destroy their opponents

That’s true, of course, but then Democrats on the Judiciary Committee and throughout the Senate, as well as their sycophantic allies in the “mainstream” media, all had Kavanaugh pronounced guilty as charged, didn’t they? So, it’s a good thing it wasn’t a real court of law and Democrats were sitting in judgment because they abandoned the lynchpin of our legal system when it came to Kavanaugh: The presumption of innocence until proven guilty.

Bash then talked about the mood of the country – which in this case actually meant the Left’s outrage over Kavanaugh’s confirmation.

“I want to ask you about the atmosphere. The president and Republicans, what they are saying is that Democratic protesters are — quote — ‘an angry mob,'” Bash said as Hirono laughed out loud. “And what I want to ask you about is, you know, it is one thing to protest at the Supreme Court, to do it at the Capitol. That’s been done for generations and, frankly, since the founding of this country.

“It’s another thing to run senators out of restaurants, go to their homes,” said Bash. “Is that going too far?”

Hirono would not speak out against the violence and extremism, however, by condemning the harassment of GOP lawmakers. Instead, she said that the far Left is “very much motivated” before launching into complaints about “what happened with Judge Kavanaugh…from the very beginning, this was not a fair process.”

Actually, it was more than fair. By agreeing to delay Kavanaugh’s vote by a week to give the FBI additional time to examine witness statements, Judiciary Chairman Chuck Grassley, R-Iowa, did something Sen. Dianne Feinstein, D-Calif., would never have done (especially since she was in on setting up the entire plan to derail Kavanaugh).

Democrats daily prove they cannot be trusted with power again – ever. They don’t want political debates anymore, they want to completely destroy and eliminate all opposition.

And if they have to do it like Josef Stalin did, so be it.

Read more about the Left’s increasing violence at Violence.news.