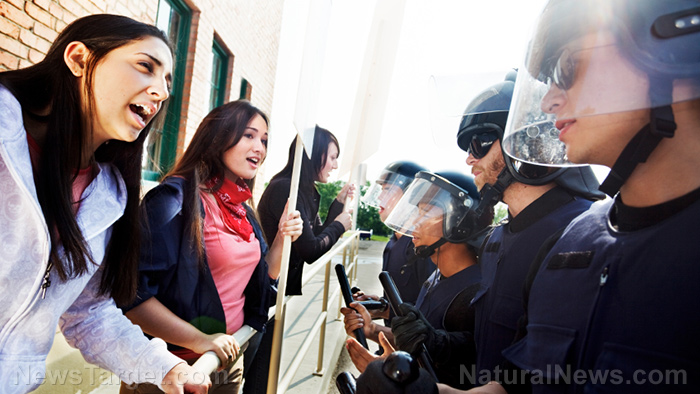 When looking at the Civil War* taking shape in this Country, it is useful to have a concise descriptor for the two sides, or factions in this conflict.

How do we describe each side? When, for comparative purposes, we look at the American Civil War of the Nineteenth Century, there were several colloquial, informal descriptors: ‘The North’ versus The South;’ ‘The Union’ versus ‘The Confederacy;’ and ‘Yankee’ versus ‘Rebel.’

However, there is one formal descriptor—‘The United States of America’ versus ‘The Confederate States of America.’ This latter formal description of the two sides is, arguably, the best, as we can clearly see the central issue of the conflict framed in those descriptors: namely, whether the Country would continue to exist as one independent sovereign Nation, with one central federal Government, where federal authority emanates from Washington, D.C., or, whether the Country would henceforth exist as two independent sovereign Nations, each with its own central Government.

But, when looking at the present Civil War, we have not seen apt descriptors for the two sides, and, in the absence of one or more accurate descriptors, the nature of the conflict itself may seem hazy, which may cause one to wonder whether there truly is a civil war brewing at all. In fact, there is.

In describing the two factions, the two combatants, we have considered various terminology and rejected that terminology because we considered the verbiage as, one, either vague and ambiguous, and therefore likely to create confusion; or, two, too narrow in scope or range, and therefore deficient; or, three, demonstrating unacceptable overlap in meaning.

We have seen employed and we have, ourselves, employed, heretofore, one or more of the following expressions to describe or intimate the two sides to the conflict: ‘Democrat,’ ‘Leftist’, ‘Progressive,’ ‘Liberal,’ and ‘Radical,’ ‘The Left,’ to describe one faction; and, ‘Republican,’ ‘Conservative,’ and ‘Populist’, and ‘The Right’ or ‘Alt Right’ to describe the other. As to the words, ‘Republican’ and ‘Democrat,’ most people, undoubtedly, would hesitate to call Democrats and Republicans as representing two sides to a major civil conflict. This would, indeed, seem, at first glance, to be singularly bizarre. Yet, when we see some Congressional Democrats essentially and effectively calling for violence against those espousing another dissimilar view and when we see the Democratic Party Leadership either remaining silent or—as we are also beginning to see from Hillary Clinton & Eric Holder—espousing violence, as well—then it is NOT completely off the wall to consider that, in Congress, as a microcosm of the Country, two distinct factions do exist there as much as outside the U.S. Capitol.

Some of the expressions as commonly used are, as well, simply essentially, empty and vacuous vessels, through overuse; and, so, serve no useful, functional purpose as descriptors for the two factions that have lined up.

We have also considered use of the expressions, ‘Globalist’ or ‘Internationalist’ or ‘Transnationalist’ to describe one faction and we have considered the expression,‘Nationalist’ to describe the other faction. But these expressions come up short as apt descriptors, too, because they are nebulous. Moreover, the term, ‘Nationalist,’is all too often used as a term of disparagement by the mainstream media, when writing or talking about President Trump, or anyone who supports him. The mainstream media erroneously identifies the President’s nationalist fervor with fascism, even though President Trump clearly is not a fascist and the term‘nationalism’ does not denote ‘fascism’, and should not be construed as synonymous with ‘fascism.’ However, the allusions are there, just the same, operating as a meme in the public’s consciousness. This is all by design, to attack the legitimacy of Donald Trump as the Nation’s President.

So, where does that leave us in coming up with a suitable label to describe each faction?

A well-learned attorney, and legal scholar with whom we have discussed the matter, suggested that the expressions, ‘Collectivist,’ and ‘Individualist,’ are the best terms to describe each respective faction. And we concur. These two expressions are precise; carry no connotation of disparagement; have not heretofore been used by anyone, to our knowledge, to describe the two factions; and broadly embrace all beliefs, precepts, presuppositions and aims of each of the two sides facing off in this modern American Civil War. Furthermore, there is no danger of overlap in what each term connotes. Mutual exclusivity in both the connotation and denotation of the expressions, as applied to each of the respective groups, is therefore faithfully maintained. The expressions, ‘Collectivist’ and ‘Individualist,’ are, then, the two expressions we will use here as referrers or descriptors for each of the two factions in this conflict.

In our next segment we will lay out the basic belief systems, precepts, and ultimate goal and logical outcome of the Collectivist and Individualist philosophies, the motivations of which can be readily discerned from those beliefs, precepts, and aims. We will see in this delineated list two competing visions for our Country, one of which, taken to its logical conclusion, results in the ultimate dissolution of the Country as an independent, Sovereign Nation State, along with the dissolution of the Nation’s Constitution and system of laws. The other faction seeks to preserve the Country as an independent, Sovereign Nation State, in accordance with the intention of the founders of the Nation; and with the Nation’s Constitution and laws intact and supreme, never to be subordinated to foreign law or foreign jurisprudential system.