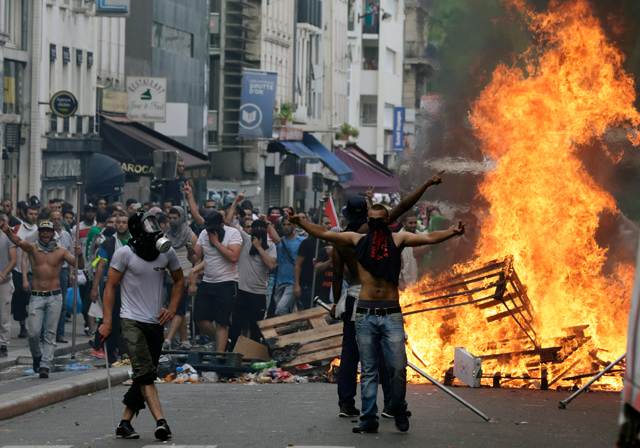 As more and more political protests turn violent, the likelihood of civil unrest or even urban warfare breaking out seems increasingly high. A lot of people are showing a particularly vicious edge to their disagreement with President Trump and his policies that was not seen in the past, and it’s precisely the type of anger that can grow into violence if the fires are stoked enough. That is to say nothing of the type of rioting that can be spurred by a controversial police shooting, which is something that could occur at any moment in any city across the country. This isn’t the mere opinion of a bunch of bored “preppers;” the military and law enforcement agencies have been ramping up preparations for such situations in a series of drills.

How can you tell when a riot is about to break out near you? Ready Nutrition’s Joshua Krause was in Berkeley just before the massive protests surrounding the deaths of Michael Brown and Eric Garner turned into violence, and he has identified a few signs that things were about to get ugly – although he didn’t realize it at the time.

Lots of clues… if you know where to look

The first clue something was amiss was a massive police presence that was far greater than anything he had ever seen in the city. It wasn’t just the volume of police officers that were stationed there – it was the equipment they saw fit to bring along.

For example, there were several plain-looking big buses parked near where protests were expected. This is a clear indication that the police were preparing to detain a vast number of people. Moreover, helicopters could be heard buzzing overhead, which is not something the police normally put forth the effort and expense to put in place if they’re not expecting serious problems.

However, it was a much smaller sign that Krause feels was even more significant, and only someone who is really alert would have noticed it. He said that even though Berkeley police normally tend to leave homeless people alone in the city, on that day, he witnessed two cops politely telling a homeless man that he should leave the area. Their lack of aggression indicated that the man had not been acting unruly. Instead, Krause believes they were telling the man to leave the area for his own safety.

He also noticed lots of area businesses closing early. Rather than simply locking up and going home, however, they were boarding up their windows and doors much the same way they would in Florida before a hurricane strikes. In hindsight, it was clear that they were expecting major riots, and Krause believes the police must have issued advance warnings because protests are not uncommon in Berkeley and stores never take such extreme measures.

Sometimes you’ll find postings on social media by organizers of protests, but other times you’re dealing with flash mob riots that are really hard to predict. Look out for sudden groups, especially if they are loud, and head in the opposite direction if you see them.

One of the biggest takeaways from this is that it pays to always be looking out for warning signs, particularly when you’re walking through a city – which is an everyday occurrence for many people. If you see police and locals alike taking precautions that seem extreme, your best bet is to get out of there as fast as you can and ask questions later. It’s normal to be curious in these situations, but civil unrest can spring up so quickly that you might not have a minute to spare, so flee first and ask questions later. If you can reach somewhere with a stockpile of survival food and other supplies, even better. Perhaps it’s overkill and things won’t get out of hand, but today’s protesters are growing increasingly bold and angry, and the economic climate means many of them feel they have very little to lose – a perfect recipe for true disaster.