Uncensored and Independent Media News
Home
Health Freedom
Second Amendment
Prepping
Survival
Censorship
Subscribe
SHOP
Popular Articles
Why is it a crime for a citizen to lie to the government, but no crime at all when government politicians routinely LIE to the citizens?
12/04/2018 / By Ethan Huff / Comments 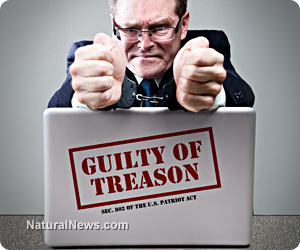 In typical form, the mainstream media talking heads and their mindless followers are making much ado about nothing concerning a recent plea deal confession by Michael Cohen, the former personal lawyer of President Donald Trump.

As reported by Brietbart and others, Cohen is now claiming that certain details concerning Trump’s alleged interest several years back in building a real estate tower in Moscow were slightly different than what he told special counsel Robert Mueller back in 2017 – and leftists everywhere, as to be expected, are calling for his and Trump’s heads on a platter.

Cohen reportedly made a “surprise” appearance in a New York courtroom recently where he admitted to making “false statements” about alleged plans to build a Trump Tower in the former Soviet Union, stating now that the plans were scrapped a few months later than when he had previously stated they were.

Anti-Trumpers everywhere naturally see this as “proof” that the Trump campaign colluded with Russia, even though this purported real estate deal that never actually happened had absolutely nothing to do with Trump’s campaign for the presidency.

These facts — and more — only prove that Mueller and his fellow partisan hacks still have nothing on the President, and are merely acting in desperation to claw at anything that might take him down.

Hillary’s entire political career was based on lies, but she’s still not in Guantanamo

In the process, however, they’re demonstrating a huge double standard in American politics. Regardless of what Cohen may or may not have confessed to that doesn’t match up perfectly with what he said on a previous occasion, the fact remains that government officials lie to the American people all the time, and never face any consequences for these lies.

Failed presidential candidate Hillary Clinton, for instance, lied to the public about her emails, her direct involvement in the Uranium One scandal, and so much more – and yet she still roams free.

There really hasn’t been a politician in recent history who’s ever had to face true justice for his or her crimes, even as everyday Americans are routinely thrown in prison over minor and often inconsequential legal technicalities.

What Mueller’s endless witch hunt against President Trump illustrates, once again, is that there are certain “deep state” assets that are above the law. And these deep state assets are willing to make mountains out of molehills if necessary to take down their political opponents – in this case a President who’s not a politician and isn’t part of the “club.”

The incredible irony, of course, is that Mueller and his cronies are trying to paint this never-ending witch hunt as some kind of valiant effort to preserve American “democracy,” when, in fact, the entire charade represents little more than third world authoritarianism against our President of the People.

The simple fact remains that, regardless of the minutiae of his earlier statements, Cohen still appears to stand behind his longtime claim that Russia played no role in the electoral process of the 2016 presidential election. He famously stated that he never saw anything, and that there was “not a hint of anything” that would demonstrate any “Russian interference in our election or any form of Russian collusion.”

This should be enough to put the ridiculous conspiracy theory to rest. But alas, leftists are insistent upon taking down the President using any means possible, including thwarting the injustice system to achieve their final endgame of seizing absolute power over We the People.

For more news on the Left Cult’s crusade against President Trump, be sure to check out Trump.news.