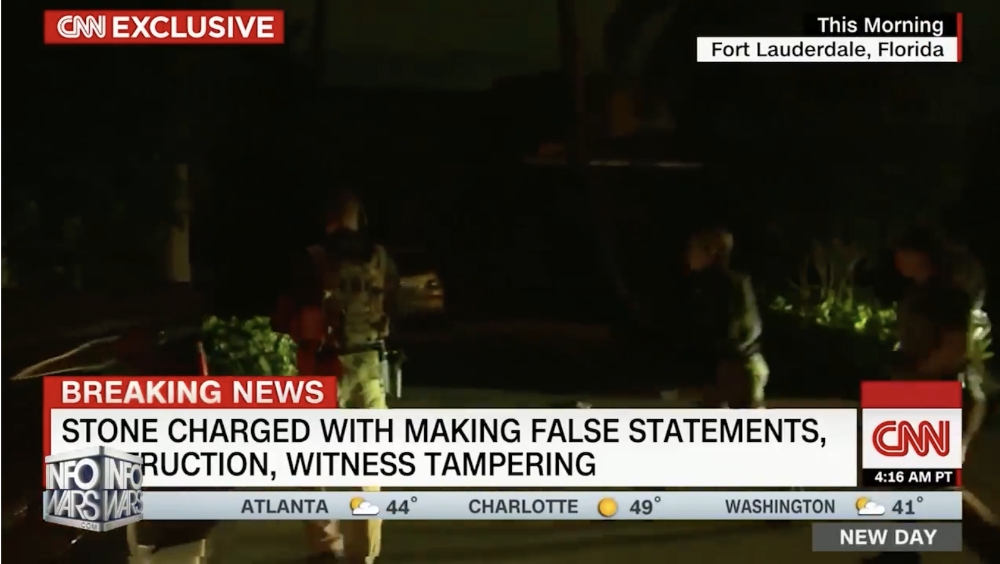 After watching CNN’s footage of the arrest of longtime conservative political operative Roger Stone Friday, it’s hard to reach any conclusion other than the Deep State, working through special counsel Robert Mueller, has completely co-opted what was left of our justice system.

Let us count the ways America is becoming a police state.

First and foremost, the fact that CNN was the only news network present for the raid should set off ‘Deep State’ alarm bells. The network’s coverage of POTUS Donald Trump, whom Stone once advised early in his 2016 campaign, has been so biased that reporters have been fired, multiple stories have been retracted, and CNN’s reputation is a dumpster fire. And yet, because CNN remains virulently anti-Trump, it was rewarded with a tip-off to Stone’s arrest.

As for the arrest itself, the tactics used were excessive — there are no two ways about it. Stone is 66 years old and not someone most normal people would mistake for a threat. We’ve not seen him engage in any public displays of violence, and since he’s made no physical threats against anyone we have to ask why it was necessary to send in a SWAT team and more than a dozen other well-armed federal agents to take him down.

The only answer that makes sense is that Mueller wanted to send the same message to Stone that he sent during the raid on Paul Manafort’s home in the early morning hours: He commands a large number of paramilitary forces who are more than prepared to kill if given any reason to do so. The ‘terror’ factor also goes a long way towards discouraging anyone who was considering joining Team Trump 2020 from doing so. (Related: Roger Stone following his arrest: Robert Mueller a “rogue prosecutor” using Gestapo tactics against political enemies.)

As for the FBI, after intentionally letting Hillary Clinton off the hook when everyone knew she was guilty of mishandling classified information, it defies explanation as to how Stone deserves the kind of treatment he got for allegedly being guilty of process crimes like ‘obstruction’ and ‘lying to Congress’ — charges that could also very well have applied to her. Yet, when FBI agent Peter Strzok and others went to interview Clinton at her home in July 2016, even as the corrupt James Comey was preparing to exonerate her days later we would learn, they showed up in suits and SUVs, not SWAT vehicles with automatic weapons.

These are all tactics used by the former East German Stasi or Soviet KGB: Intimidation, selective arrests, police state persecution, protecting the powerful and politically connected. People in polite company are always quick to point out that “not all FBI agents are like this,” and that’s true but they are certainly being led by officials who are corrupt or, at least, compromised.

Before President Obama took office, who would have ever thought that an FBI director not named J. Edgar Hoover would allow such blatant violations of national security law to go unpunished? Who would have believed that an FBI deputy director would leak to the media and lie about it? Who could have imagined that an attorney general, in this case Loretta Lynch, was in on the fix to exonerate someone so obviously guilty of crimes? Who would have thought that a Justice Department deputy director — like Rod Rosenstein — would appoint a special counsel based on a false narrative (criminal “collusion” between the Trump campaign and Russia) and without the suggestion that a crime had been committed, as the special counsel statute requires?

The fact that Donald Trump managed to win the presidency has so offended and angered Washington’s political establishment that all stops are being pulled in order to bring him down, and that obviously includes empowering the FBI as Mueller’s private mercenary force.

Read more about the corruption of Robert Mueller and his ongoing witch hunt at RobertMueller.news.