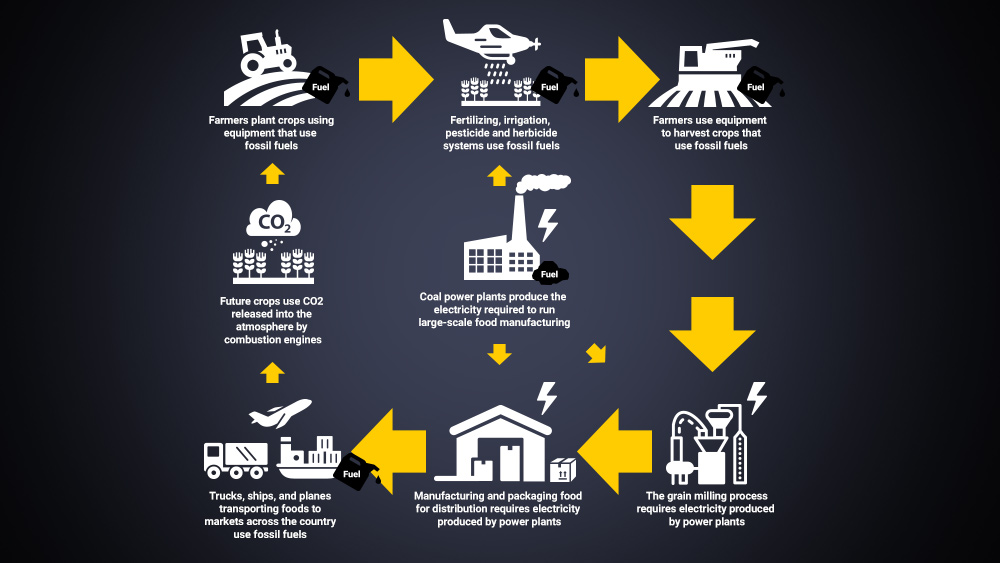 The widely-touted “Green New Deal,” aggressively pushed by AOC and radical left-wing Democrats, demands ending reliance on fossil fuels in ten years. All combustion engines must go, the plan insists, and “clean” energy sources such as wind and solar must replace them in order to save the planet from total destruction that Alexandria Ocasio-Cortez claims will take place in 12 years (unless we surrender to the climate change cultists).

In pushing this plan, Alexandria Ocasio-Cortez appears to be either economically illiterate or intending to unleash mass starvation and suffering across the nation. Does she not realize there is no such thing as wind-powered farm tractors or solar-powered long haul big rig trucks? There are no battery-powered commercial jet airliners, either, and the entire infrastructure for agriculture depends almost entirely on heavy equipment that runs on combustion engines.

The simple, undeniable truth of the matter is that batteries simply don’t come anywhere close to the energy density of fossil fuels. Large agriculture tractors run on diesel fuel because diesel packs an astonishing amount of work energy into a small amount of volume and weight of fuel. Airplanes run on jet fuel for the same reason. Long haul transport trucks run on diesel because the portability of the liquid fuel provides torque and range, allowing trucks to drive many hundreds of miles between fuel stops, even when hauling tens of thousands of pounds of consumable products.

In fact, a 100 horsepower tractor — a common size for a farm tractor — would need to be outfitted with nearly 5000 square feet of solar panels to equal the power of a single 100 h.p. diesel engine. That’s a solar array of roughly 70′ x 70′, mounted to a tractor.

Such a tractor would be impossible to maneuver and would stop operating when the sun isn’t shining. It would fall over at the slightest incline, and would be blown away by the slightest wind. The 70′ square solar array would make the tractor impossible to transport on a truck, park in a barn or even moved into a repair shop. The very idea is sheer insanity.

It is upon these insane, ludicrous dreamworld concepts that AOC’s Green New Deal is ultimately based. Anyone who’s going to insist that all combustion engines be eliminated in ten years might as well also say that Leprechauns will deliver pots of gold at the end of every rainbow, or that new batteries will run on magic. This is what the Democrats have come to: Sheer insanity disguised as policy.

Shutting down fossil fuels would collapse the U.S. food supply and lead to mass starvation

Natural News has conducted a straightforward analysis of the agricultural use of fossil fuels and how the food production industry would be impacted by ending the use of fossil fuels in the next decade. A detailed infographic, shown below, summarizes these important findings.

What we’ve found should be alarming for anyone paying attention to reality. Here are the main points:

In summary, the “Green New Deal” appears to be a planned, engineered economic apocalypse plot to destroy America from within. No wonder so many Democrats have signed onto the plan, for it is exactly what they want to see happen: the complete economic destruction of the United States of America.

The Green New Deal might be more accurately called “the 1700s” because it would thrust America back to the age before engines and machines, forcing the nation to live in an era utterly lacking in modern machines that produce and transport the food supply.

You can also view a larger version of the following infographic at this link:

It’s also worth noting in all this that combustion engines release carbon dioxide, the very “miracle molecule” needed by plants to grow and produce food. CO2 is essential to photosynthesis, and by burning fossil fuels, heavy machines actually release carbon that has been sequestered in the Earth. Higher CO2 levels in the atmosphere accelerate food crop production and even allow arid regions of the world to produce more food. This is why greenhouses frequently buy and operate CO2 generators to increase the CO2 in the greenhouse air, accelerating plant growth.

Thus, the very fossil fuel-powered machines that harvest the food also release food-producing nutrients as they are operated. This is an indisputable scientific fact. There’s even a non-profit group called the CO2 Coalition that publishes white papers talking about the simple science behind CO2. (The group is probably funded by the energy industry, but that doesn’t mean their information is wrong.)

Carbon dioxide is such an important molecule for all life on Earth that I’m now calling it the “God molecule.” Yet climate change cultists call CO2 a “pollutant,” completely oblivious to the crucial role this molecule plays in all plant life on our planet (and nearly all food webs that support animals and humans).

Although combustion engines can release particulate pollutants, that is almost entirely eliminated through emissions controls. Newer diesel engines even use ammonia solutions to produce near-zero emissions, and all the agricultural, construction and transportation equipment sold today must adhere to these stringent emissions controls. I know this because I own modern John Deere equipment, and the emissions are so clean that you can now literally stand right behind the exhaust of a diesel-powered machine and breathe normally. It’s not like the old ways when diesel engines spewed dark clouds of toxic pollutants.

Solar power and wind power have their place and can be very effective at powering homes and businesses that are connected to the grid, but “green” energy sources are incredibly bad at powering machines which are not connected to the grid. That’s why the Green New Deal is a pipe dream authored by some of the most incredibly stupid, scientifically illiterate people on the planet.

Watch my video on carbon dioxide to learn more, via Brighteon.com:

Also see more details on fossil fuels consumption by the agriculture sector at: