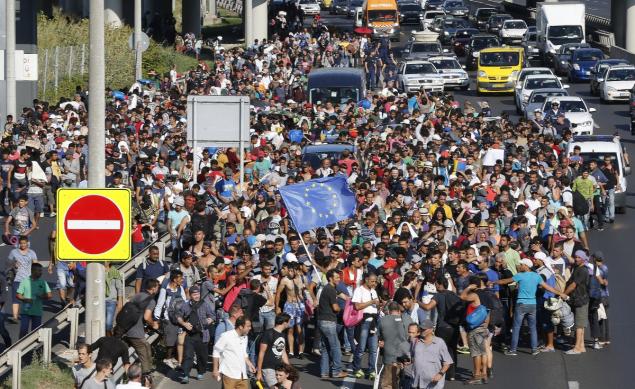 Europe continues to be inundated with migrants, most of whom are streaming in from failed states in the Middle East and North Africa, long after several EU countries have exhausted their capacity to take them in.

Most recently, Greece has been dealing with a crush of migrants similar to what the United States is having to deal with on its southwestern border, with police being attacked and barricades rushed.

As Reuters reports, migrants clashed over the weekend with Greek police for the fourth straight day, pelting many with rocks and attempting to crash through barriers after hearing rumors that borders had been opened:

Greek police fired teargas on Saturday as angry migrants hoping to travel to northern Europe hurled stones and bottles after being barred from reaching a nearby border crossing, witnesses said.

After hearing that border checkpoints had been opened, hundreds of migrants and refugees came to the Greek border checkpoint at Diavata last week, where there is a migrant camp located near the country of North Macedonia.

According to reports, migrants pitched dozens of tents in a nearby field on Saturday as Greek riot police formed a cordon to block access to a route out of the country. Police used 20 buses parked in a line to stop migrants from leaving the field. In addition, Greek authorities sent buses to take migrants back to housing compounds where they have been living since arriving in the country over the past few years.

But the migrants wouldn’t heed instructions from riot police who were eventually forced to fire tear gas around noon Saturday at dozens of people, some of whom were carrying children, because they were throwing rocks and bottles while charging the barricade line.

“We don’t want to fight with the Greek police,” said 36-year old Yaser, a Syrian refugee, sitting on a blanket with his baby son in his arms. “We want to go to Europe, we don’t want to stay in Greece,” he told Reuters through an interpreter.

Fatemeh, his 26-year-old wife, said as she cradled their six-month-old baby in her arms that the family was planning to stay at the camp until they could cross into Europe proper.

“We will stay here until the borders open, we don’t have any other choice,” she said. (Related: Migrants bringing infectious diseases back to Europe: tuberculosis, diphtheria and more.)

Pulling up the drawbridge in Europe

As police fired tear gas and flares, thick smoke arose throughout the area after several angry migrants started fires in the field where they were camped. Despite pleas from Greek government officials to board buses and head back to their housing units, most migrants refused — though some opted to return.

In Turkey, Greece’s neighbor, authorities detained about 1,200 migrants who were also attempting to flee into Europe after hearing that border routes were opened. Reuters notes further:

Tens of thousands of refugees and migrants, mainly from Syria, Iraq and Afghanistan, are stuck in Greece from when Balkan countries shut their borders in 2016, closing the main passage towards northern Europe.

With ISIS defeated and the Syrian civil war essentially over, governments in Europe are urging migrants who came from the war-torn country to return and rebuild it. But despite the war being over, other conflict zones are driving migrants from those regions to the EU — which may soon have to consider building walls of barriers of its own.

If not, the continent will continue to experience a flood of migrants who are bringing with them poverty, low skills, and a foreign culture and religion that all clash with Western values, mores, and Christian beliefs.

A year ago, European Union leaders were “pulling up the drawbridge” and demanding that migrants stay away because the continent could not handle any more, Politico reported:

Go home and stay home — that was the message, crafted in the dead-handed bureaucratic prose of an EU summit communiqué.

Read more about how Europe and the U.S. are dealing with open borders and migrant invasions at Migrants.news and OpenBorders.news.