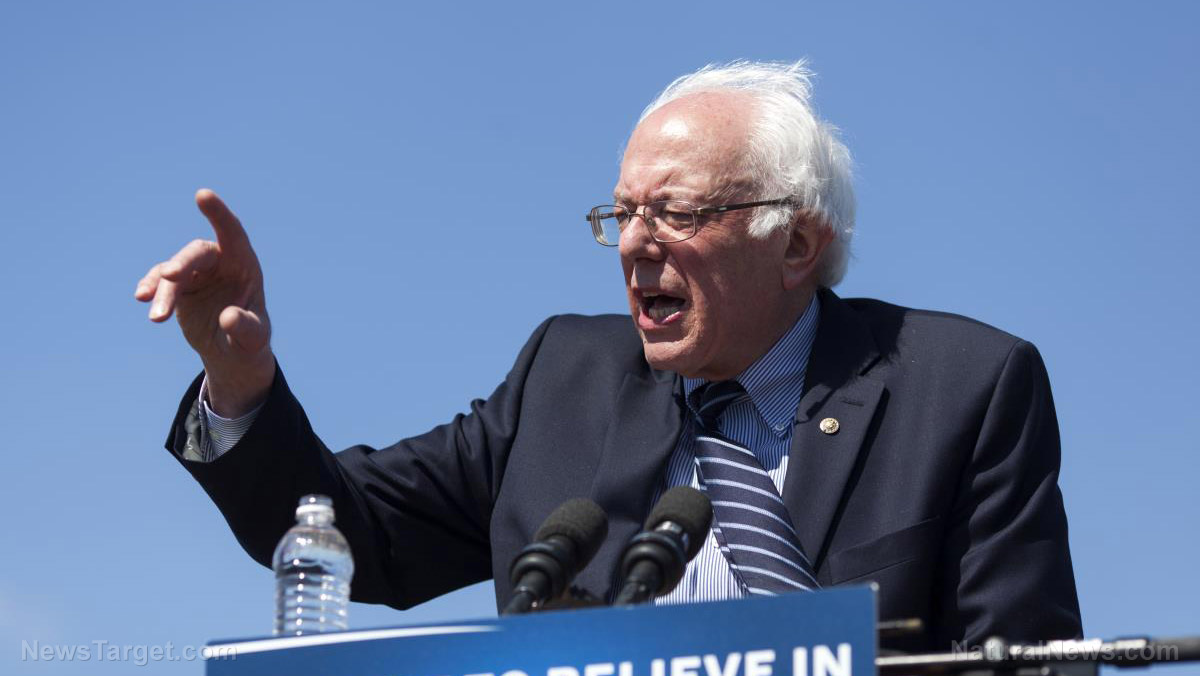 The American Left has begun pushing a new anti-white narrative aimed squarely at any Caucasian supporter of POTUS Donald Trump: Equating being “white” and being a MAGA “nationalist” with being a “white supremacist.”

And in doing so, the Left is creating another Trump “boogyman” for their perpetually triggered anarchists to target for new violence — including one the Democratic Party’s leading presidential contenders, Sen. Bernie Sanders.

On Sunday, the Sanders campaign essentially incited violence against a female reporter for Infowars, Kaitlin Bennett, after labeling the news organization a “white supremacist platform” and ejecting her from an event in Ohio that was supposed to be open to the general public.

When asked about the ejection, Sanders’ campaign responded (in all caps):

“WE ARE DISAPPOINTED THE PEOPLE OF THE YOUNGSTOWN COMMUNITY ARE BEING SHOWN ON THE LOCAL BROADCAST NEWS CONTENT FROM INFOWARS, A WHITE SUPREMACIST PLATFORM THAT HAS BEEN BANNED FROM YOUTUBE, APPLE AND FACEBOOK FOR HATE SPEECH AND TARGETING THE PARENTS OF CHILDREN WHO DIED IN SANDY HOOK.”

In March, Jones said during a court deposition over lawsuits filed against him by a half-dozen families of the Sandy Hook Elementary School shootings in 2012 that having been duped so often by the so-called “Mainstream” media made it far more difficult to trust what any of them say. And given their records of fake news just during the Trump presidency, who can honestly say he’s wrong?

In any event, Bennett told WFMJ regarding her expulsion from the rally: “I asked them, did I violate any rules, did I do anything, am I a disturbance? I was just scrolling on Facebook. They simply didn’t want me there because they know who I am and I believe that event was staged they had plants in the audience who were supposed to ask the questions. Bernie was scripted with the responses and they didn’t want anyone else to try and ask questions.”

She said had she been allowed to stay, she would have asked the 2020 candidate if he supports providing free healthcare to illegal aliens. She also said she left the premises without making a scene, though she adds she’s never been considered a disturbance at any other political rally or event that she’s covered for Infowars. (Related: The U.S.’s problem with PC-culture: Lack of free speech will be the country’s downfall.)

If you weren’t afraid yet for the future of America, you should be now

The local news station also noted that the Sanders campaign did not give an adequate, specific response as to why Bennett was ejected.

Which leaves us to draw our own conclusions, and we have: She’s white, she works for Infowars, and she’s been branded a “white nationalist” a.k.a. white supremacist by Bernie Sanders, via his campaign.

That will make her ‘fair game’ for the next radical Leftist idiot who feels he or she is justified in committing an act of violence because, you know, it’s perfectly okay to ‘hit a Nazi.’

You know who else thinks that? CBS. In a recent segment on the CBS series “The Good Fight,” a chaotic riot scene in which people are attacked, cars are overturned and burned, and police vehicles are smashed, a lone black man approaches the camera and begins to speak.

“Is it all right to hit a Nazi unprovoked?” he begins. “I was always taught to never throw the first punch, never instigate, defend but don’t attack.

“But then I saw a video of white nationalist Richard Spencer being punched in the face during an interview,” the actor continued. “And then I realized there’s no better way to show some speech is not equal,” he said. “Some speech requires a more visceral response.”

Let’s be clear: Spencer was used as a stand-in for all whites who aren’t abject Leftists, as the Sanders campaign proved when it claimed, wrongly, that Kaitlin Bennett works for a “white supremacist” organization. Because Alex Jones disagrees with the Left…he’s a “white nationalist/supremacist” Nazi who also shouldn’t be allowed to speak, and if does, he and his staff deserve violence.

This message is now coming from mainstream media outlets and a mainstream Democratic presidential contender.

If you weren’t afraid yet about the future of America before this, how about now?

Read more about the intolerance of the American Left as they push us towards civil war at Intolerance.news and CivilWar.news.