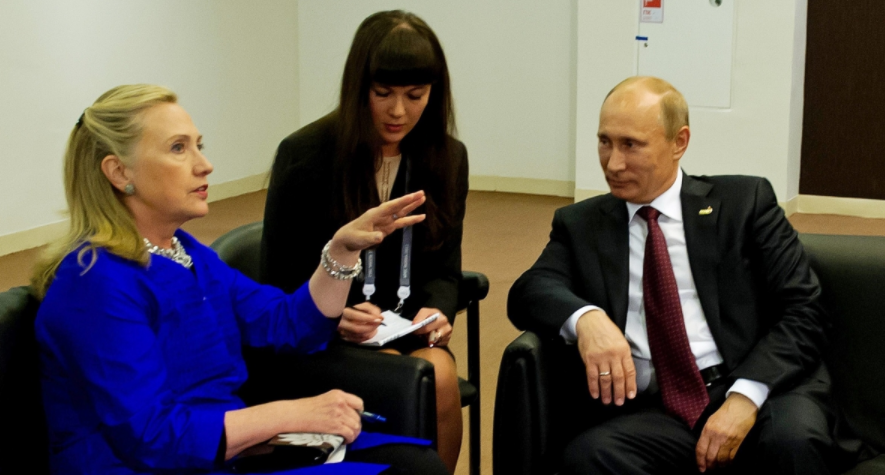 Hillary Clinton has whined so often about the fact that she was beaten by a realty TV star whose first official foray into politics took him to the top elected office in the world that it’s long since gotten old.

And yet she did it again just this past week at an event billed as “An Evening with the Clintons” where, reportedly, tickets sold for as little as two bucks.

During the event at The Forum in Los Angeles, Hillary — a two-time presidential loser — appeared on stage with her former president husband, Bill Clinton, the Impeached One, to complain that Russia, or Trump, or Russia and Trump, prevented her from taking her ‘rightful place’ in the Oval Office.

Perhaps because he had no acting gigs lined up or because he, like the Clintons, is trying to hold onto some lost glory, the former first couple was introduced by actor Ted Danson, who also sort of served as moderator/chief question asker for the event.

“You can run the best campaign, you can even become the nominee, and still have the election stolen from you,” she said.

Hillary Clinton has blamed everyone and everything for her 2016 election loss and now she’s straight up saying the election was stolen from her.

Loser Hillary Clinton didn’t even visit Wisconsin during the 2016 presidential election and she has the nerve to say the election was stolen from her.

That is, of course, true. Clinton didn’t frequent any of the so-called “blue wall” states in the upper Midwest which were supposed to fall automatically to her, while POTUS Trump visited Ohio, Pennsylvania, Michigan, and Wisconsin frequently. And he won them.

Hillary also likes to claim that, hey, she won the “popular vote” by a couple million so that ought to count for something. Only, in our representative republic, where presidents are elected by the Electoral College, not directly by the people, that’s not how it works.

Is Hillary just playing a role?

But let’s take a step back from Clinton’s constant whining and hyperbole about the election result and ask just what is behind the constant, narcissistic indulgences: Is she just a bitter old troll with nothing else to do? Is she mentally incapable of accepting defeat (especially by someone she and fellow Democrats consider to be the equivalent of a carnival barker)? Is she too arrogant? Too elitist? Too self-entitled?

Perhaps she may be a combination of all of those traits. But what if there’s a method to her madness? What if she’s just playing a role? What if she is helping lay the groundwork for Democrats ahead of Trump’s expected 2020 reelection to call it into question from the outset? (Related: Newsflash: Coming indictment of Hillary Clinton will lead to U.S. riots; Ukraine to declare martial law; Venezuela infrastructure in collapse.)

We already know that Democrats have been claiming since Clinton’s defeat that POTUS’ victory wasn’t “legitimate.” That claim rests primarily on the fact that he did not win a majority of votes (though he did win a solid majority of electoral votes). The claim is also based on the fabricated hoax that Trump “colluded” with Russian President Vladimir Putin against Hillary and her Democratic tribe.

Two-and-a-half years into the Trump presidency, there are still Democrats who refuse to accept his victory; what will it be like if he wins again next year, as it looks like he will?

Is Hillary Clinton really delusional about her loss to President Trump or is she just being a good Democrat foot soldier, goading her party faithfully into challenging next year’s results in some violent way?

Read more about Hillary Clinton and Donald Trump at Clinton.news and Trump.news.