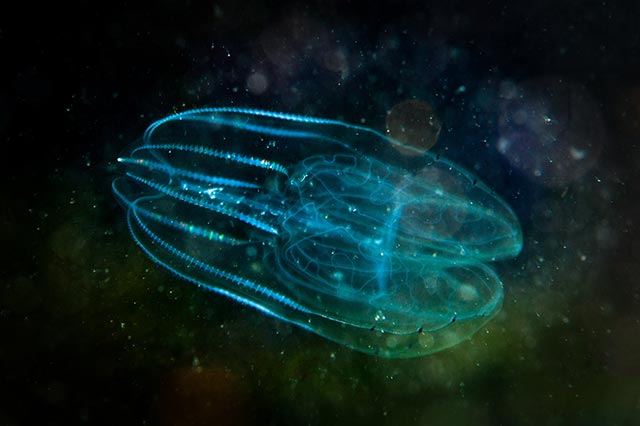 Given its gelatinous body, a primitive skeleton, and a mouth ringed by 18 tentacles, the fossil of Daihua sanqiong might be mistaken for a sea monster – were it not for its small size. Its discoverers believe the extinct animal to be an ancestor of comb jellies.

D. sanqiong lived 518 million years ago in the seas that covered modern-day China. Many of its body parts resembled those of the comb jelly (phylum Ctenophora, a.k.a. ctenophores), a tiny marine organism that propels itself through the water with comb rows of cilia.

Researchers at Yunnan University first discovered the D. sanqiong fossil. A follow-up analysis by Bristol University researcher Jakob Vinther reported that the newly revealed species might be an ancient relative of comb jellies.

“With fossils, we have been able to find out what the bizarre comb jellies originated from,” Vinther shared in an interview. “Even though we now can show they came from a very sensible place, it doesn’t make them any less weird.

While researchers argued that the Bristol study might have jumped the gun in linking D. sanqiong to Ctenophora, they did find the multi-tentacled creature to be fascinating in its own right. (Related: Scientists warn that the world’s most unusual sharks and rays are on the “brink of extinction”.)

Yunnan researcher Xianguang Hou dug up the D. sanqiong fossil in the namesake province of his university. He named it after the Dai people of Yunnan. He also added the Mandarin word for flower, “hua,” to describe its shape.

During a visit to Yunnan, Vinther noticed D. sanqiong in the fossil collection shown by his Chinese colleagues. He and Hou examined it further.

The tentacles of D. sanqiong featured delicate feathery branches with lines of large cilia. The hairs drew Vinther’s interest because the only other creature with cilia of that size is a comb jelly.

Comb jellies rely on their cilia for propulsion. During movement, the hairs flicker with bioluminescent color. While carnivorous and resembling certain jellyfishes, comb jellies are actually harmless to humans.

Vinther and Huo also drew comparisons between D. sanqiong and other extinct animals. For instance, the sea anemone-like Xianguangia also sported 18 tentacles. So did Dinomischus and Siphusauctum, which looked like tulips but lived on the seafloor.

Based on these anatomical comparisons, they rebuilt the early lineage of comb jellies, starting with D. sanqiong and linking them to other species like Xianguangia.

Some experts theorized that comb jellies might be one of the first animals to exist on Earth. They came up with this concept after analyzing the family trees and the genes of comb jellies.

The Bristol-Yunnan study presented a lineage that showed the invertebrate comb jellies descended from some animals with skeletons. Furthermore, the tentacles of the ancient animals evolved over time until they became the cilia-adorned combs sported by modern-day ctenophores.

Additionally, D. sanqiong helped determine the location of other ancient animals on the biological tree of life.

Yunnan researcher and co-author Peiyun Cong noted that Xianguangia got classified as a sea anemone (phylum Cnidaria) at first. But the results of their anatomical analysis indicated a closer relationship to comb jellies than to the favorite homes of clownfish.

The findings of Vinther, Huo, and Cong proposed a shared lineage between comb jellies, corals, jellyfishes, and sea anemones.

“Those [ancient] tentacles are the same tentacles that you see on corals and sea anemones,” Vinther reported. “We can trace comb jellies to these flower-like animals that lived more than half a billion years ago.”