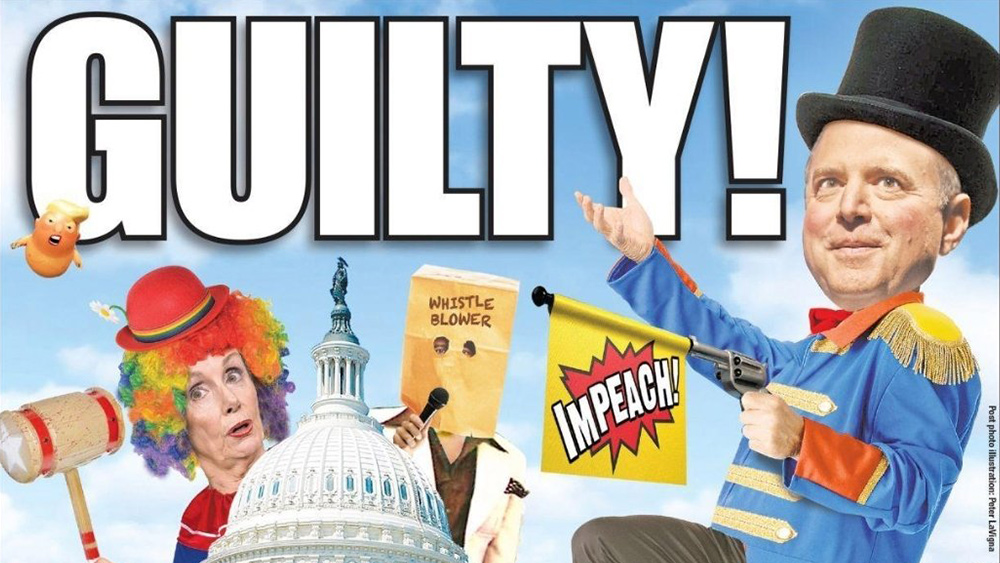 And now the circus begins.

“What we will witness today is a televised, theatrical performance, staged by the Democrats.” – Rep. Devin Nunes.

In what looks like another clown show replay of the staged Kavanaugh hearings, Adam Schiff (Loonbag-CA) and the desperate Dems are now rolling out a full theatrical production of their non-impeachment impeachment, consisting of non-whistleblower whistleblowers who cite anonymous sources who have fourth-hand knowledge of other anonymous sources who claim President Trump pressured the worker at the 31 Flavors to give him free samples of ice cream.

It’s all a clown show that reeks of the kind of putrid cocktail of desperation, tyranny and lies that only Democrats can stir up like a left-leaning witches’ brew.

Why is this “impeachment” circus a clown show?

First, there’s the absurd idea that it’s somehow wrong for Trump to demand Ukraine investigate its own role in the 2016 deep state coup attempt against the Trump campaign. It turns out the United States of America has a law enforcement treaty with Ukraine that actually demands bilaterial cooperation on such criminal investigations.

Secondly, there’s the even more absurd idea that Obama and the Dems somehow never pressure anyone to do anything in exchange for foreign aid. As “Quid pro Joe” has openly admitted, it was routine for Obama officials to not just demand payoffs and bribes from nations like Ukraine, but to even publicly brag about it on national television. We now have the records of the actual financial transactions where Burisma Holdings of Ukraine issued 38 payments to Hunter Biden, totally more than $3.1 million. Former Vice President Joe Biden publicly bragged about pressuring Ukraine to fire a prosecutor who was investigating the corruption and fraud involving the Bidens, and Joe Biden proclaimed he would withhold a billion dollars in foreign aid funding unless that prosecutor was fired!

Does that mean Adam Schiff is holding a public trial over Joe Biden’s admitted corruption and extortion? Of course not. The Democrats pretend that never happened. Instead, they are fabricating the hoax that claims Trump did what Joe Biden actually did.

Like always, the Democrats are projecting their own criminal fraud, extortion, blackmail and other crimes onto Trump. Everything the Democrats claim Trump did was actually carried out by the Democrats themselves.

Because when it comes to the lawless, tyrannical Left, everything is staged. It’s all theater. 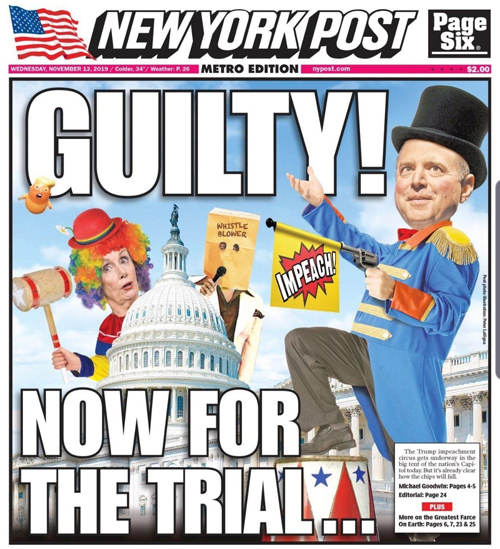 Like every theatrical production you’ve ever attended, it’s all scripted for effect. No one is allowed to deviate from the script, and the Dems exert total control over which witnesses are allowed to speak and what they’re allowed to say.

In fact, one of the most hilarious requirements of this Schiff show is that no one name the so-called “whistleblower” who is, of course, nothing more than a deep state spy who initiated this entire Schiff show by claiming he overheard a Trump call with Ukraine during which terrible things were supposedly said. This “whistleblower” is now widely reported to be Eric Ciaramella, who even Sen. Rand Paul has publicly named. But Ciaramella is a Schiff / Brennan operative who works for the deep state, and he’s part of the very same cabal of deep state traitors who have been trying to carry out an illegal political coup against our president for the last three years.

Congenital liar Adam Schiff now claims he has no idea who the whistleblower is. Seriously.

Understand that Ciaramella was coached by Adam Schiff during the theatrical planning phase of this entire Shiff-show fiasco. Now Adam Schiff claims he doesn’t know the identity of the whistleblower? What a fraud:

Rep. @Jim_Jordan rips @RepAdamSchiff for coordinating with the whistleblower.

Schiff claims he "does not know the identity of the whistleblower." pic.twitter.com/HdDQGmHwv8

In other words, we’re now supposed to believe Adam Schiff doesn’t know the name of the very person whose name he has redacted from all the interview transcripts.

That’s the level of insanity and stupidity now being run with a straight face by the Democrats, who are, without exception, devious liars and political con artists.

An intelligent person might ask how Schiff would know if anyone named the whistleblower if, as Schiff claims, he doesn’t know who the whistleblower is. Then again, you’re not allowed to ask intelligent questions, and you’re not allowed to know the names of the “anonymous” accusers who, almost without exception, are citing other anonymous sources who claim to have third- or fourth-hand knowledge of something that wasn’t even illegal in the first place.

It’s all a Shiff Show.

And it’s all being run like the circus theater it has become… scripted for the TV cameras and carried out with a level of arrogance that insults the intelligence of every thinking American.

This circus is actually TREASON

In reality, what the Democrats are doing here is called treason, and if real justice were to be served in this country, every last one of them would hang for their treasonous crimes against our nation, after being convicted in a court of real law.

Perhaps some of them eventually will. According to news rumors, the DOJ is on the cusp of releasing reports that will expose the criminality of the deep state operators who masterminded this coup in the first place (Brennan, Comey, McCabe, Strzok, etc.). That’s why Schiff is rushing the impeachment theater, by the way, in the hopes of removing Trump from office before the DOJ investigations can be completed and released.

So it’s a race against the clock, with the Dems fully realizing that if they don’t remove Trump from office, many of them will be indicted by the DOJ.

It’s time to clean up Washington D.C. and sweep the demonrats down the sewers once and for all. Arrest them all for treason and end the hoaxes, fabrications and deep state conspiracies that have long sought to overrule the will of the people and run America as a criminal cartel that only benefits the special elite.

Soon, it will become obvious that the only way America can be saved is for the people to rise up and assist Trump in carrying out mass arrests of the treasonous criminals who are behind all this… which includes hundreds of fake news media hacks, too. Perhaps that day is coming soon. Until then, enjoy the hilarious Schiff Show theater that pretends to be legitimate, all while America collapses into a mass-medicated homeless welfare state of corruption and poverty.