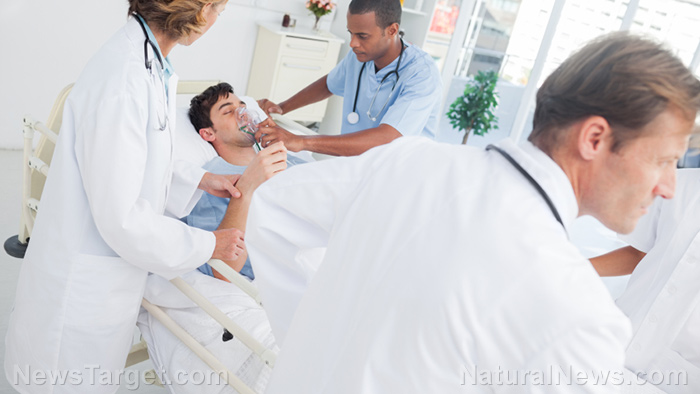 In case you needed another reason to avoid going to the hospital, a new study has shown that it’s the human contact in hospitals that is behind the spread of some deadly antibiotic-resistant bacteria.

The observational study was carried out in a French hospital, where researchers gave hundreds of patients and health care workers wearable sensors with RFID tags built into them. This enabled them to track the patterns of human contact between patients and caregivers across a period of eight weeks.

Throughout the study, they were screening patients for bacteria that is resistant to antibiotics, ESBL-producing Escherichia coli and Klebsiella pneumonia.

They discovered that the spread of ESBL K. Pneumonia to new patients was 90 percent down to contact, whether it was direct or indirect, with patients who had that same bacteria in the eight weeks prior. For ESBL E. Coli, however, the figure was under 60 percent.

This appears to indicate that strategies like good hand hygiene could help to limit the spread of ESBL K. Pneumonia. When it comes to ESBL E. Coli, however, other measures may be needed, such as environmental decontamination.

According to the researchers, the same wearable sensors from the study could be used to track the spread of other multidrug-resistant species to help learn more about how such bacteria spread and determine better ways of keeping it under control.

Lead author Audrey Duval believes this could be the beginning of a far deeper understanding of hospital infections. She stated: “By combining digital epidemiology and rapid microbiological diagnostic tools, we may be entering a new era to understand and control the risk of hospital-acquired infection with multidrug-resistant bacteria.”

Hospitals are full of bacteria

Other recent research has shown that hospitals are playing a key role in the spread of certain strains of K. Pneumonia in Europe that are resistant to antibiotics like carbapenem. The infection has been climbing dramatically in recent years, accounting for 341 deaths in Europe in 2007 and 2,094 deaths in 2015.

In the study, more than 2,000 samples of the bacteria were collected from patients across 32 countries and sent off to have their genomes sequenced. They discovered that some of the genes cause resistance to the last line of defense, carbapenem antibiotics, when expressed. It’s believed that heavy antibiotic use in hospitals helps these highly resistant bacteria spread and dominate over other strains that can be treated more easily.

The researchers reported that hospitals were the “key facilitator” of the transmission of carbapenem-resistant K. Pneumoniae, with more than half of the samples with this gene being closely related to others that were collected from the same hospital. This would suggest that the bacteria are actually spreading among patients within the hospitals.

Like the researchers in the French study, they said that better infection control and hygiene are needed to curb the problem. They also suggest that the way patients move between hospitals needs to be examined. Identifying patients with these bacteria early and isolating them could go a long way toward stopping the spread, they say.

According to the Pharma Death Clock, hospital infections have claimed the lives of nearly 1.5 million people since the turn of the century. In addition to being transmitted from person to person, some bacteria, like C. difficile, actually survive the disinfection procedures used in hospital washing machines, where they can also spread to sterile sheets.

It’s disturbing to think that they very places that are meant to help people get better are actually making them even sicker with potentially deadly superbugs, and this is exactly why it’s so important to do everything you can to boost your immunity and stay healthy.