NASA’s Mars orbiter takes a breathtaking photo of a 50-foot crater; impact could have occurred between 2016 to 2019, say experts 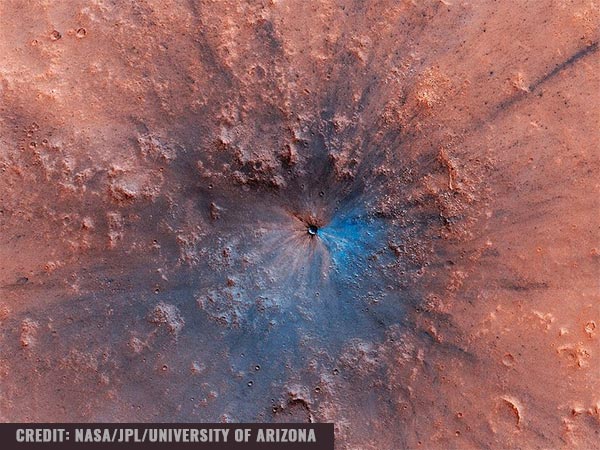 NASA has captured what appears to be a new 50-foot wide impact crater on the surface of Mars.

Onboard the Mars Reconnaissance Orbiter (MRO), a spacecraft circling and taking photographs of the Red Planet, NASA’s High Resolution Imaging Science Experiment (HiRISE) instrument – a 143-pound camera – snapped a picture of a new crater, which researchers have estimated to be between 49 to 53 feet wide.

The image was captured in April 2019 and was posted in June. It shows what appears to be a large black-and-blue bruise on the landscape of an otherwise flat and red area of Mars. The limitations of the MRO means that it can’t look everywhere at the same time – therefore NASA, along with researchers from the University of Arizona (UA) who operate HiRISE, are unsure of when exactly the impact occurred. They estimate that the crater was formed sometime between September 2016 and February 2019.

The MRO captures hundreds of photos similar to this crater every year. However, Veronica Bray, UA staff scientist and HiRISE team member, stated that this crater is one of the largest ones she and her team have seen. From the 13 years that MRO has spent observing the Martian surface, this massive impact is a fairly rare occurrence.

Bray estimated that the impactor, perhaps a meteor, would have been around five feet wide. If it had flown into Earth’s much thicker atmosphere, it would have either burst into smaller pieces or eroded away completely. She concluded that the impactor may have been a stronger, more solid rock because, from what she and the HiRISE team have observed, most rocks that enter the Martian atmosphere shatter high in the atmosphere, creating chains of small craters on the surface, not one large, explosive crater like the one in the HiRISE photo.

Bray explained that this powerful impact crater is a reminder of how Mars is a dynamic place. It has shifting sand dunes, whirling dust devils and it even has avalanches. “It’s a gorgeous crater. I’m glad I got it in the color strip,” she said.

Furthermore, the color of the crater is fascinating because it shows what’s underneath all the red dust on the Martian surface. Bray and other researchers believe it to be basaltic rock based on the colors of the image and their current understanding of Martian geology. There are also parts of the impact crater that have a bluish color, which may be exposed ice, although they aren’t entirely certain. The crater landed near the relatively warm Martian equator, although Bray said she doesn’t discount the possibility of there being a little ice underneath the dusty red surface.

Peter Grindrod, a Mars researcher and scientist, said, referring to the size of the fresh crater, “This kind of blew me away. I’d never seen anything like that.”

He added that this kind of work is only possible because the HiRISE openly shares its data with the public, allowing scientists and other interested people to learn more about Mars. While participating mission scientists are given a brief period where they have exclusive access to the data so that they can be the first to publish their discoveries, all information is still shared without restrain afterward. “Everything we do is open data, and we give away as many of these as we can,” he said.

Grindrod himself is part of a team that generated height maps for dozens of proposed rover landing sites, which he and his team gave away to everyone who wanted them. “These height maps helped show researchers potential sites for water, an important item for looking for habitable environments,” he explained.