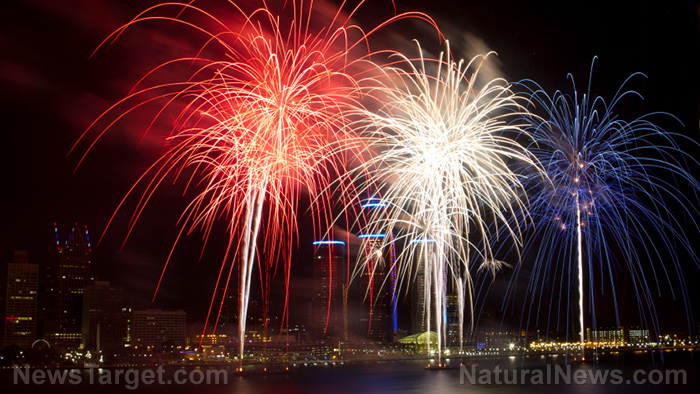 Now that the fireworks are over and President Trump’s speech at Mount Rushmore has come to an end, it is as good a time as any to inform you that if you participated in watching any of this, then you are a “white supremacist.”

This is what the Democrats publicly announced just prior to Independence Day, and are still trying to drill into the American psyche, post-festivities.

Since America is now fractured into a zillion pieces, there was not even a semblance of national unity this past Fourth, which the Democrats made sure to emphasize in the lead-up to everyone’s celebrations.

“Trump has disrespected Native communities time and again,” a now-deleted tweet by the Democrats stated, creating even more division over what should have been a neutral celebration of American history.

Interestingly, no mention was made by the Democrats of their cherished Bernie Sanders, who several years ago visited Mount Rushmore himself and declared it to be “America at its best.”

Many other Democrats, including Hillary Clinton and Barack Obama, have likewise visited Mount Rushmore prior to the Trump presidency, and the media had nothing but positive things to say about it. So, were they, too, celebrating “white supremacy?”

To learn more about how the Left is also tampering with the English language and transforming the definitions of words into unintelligible nonsense, be sure to check out the following episode of The Health Ranger Report:

The hypocrisy of the Left, especially during the Trump era, is completely beyond the pale. Nothing Trump says or does is ever right, and always somehow becomes an act of “white supremacy” to Democrats, no matter what it is.

And this hypocrisy is now spilling over into our national holidays, all of which have become symbols of “white supremacy” now that Trump is in charge. In other words, if you celebrate them, no matter what they are, then you, too, are a “white supremacist.”

The Left has been working overtime as of late to make all black people, for instance, feel as though they no longer have a part in things like Fourth of July celebrations. Not only that, but the Left is attempting to brainwash all black people into believing that their white neighbors are racists for participating in these celebrations.

And the Fourth of July is just one prominent example, by the way. There is also President’s Day, Memorial Day, Veterans Day, and likely even Thanksgiving and Christmas. If it in any way reflects American history, then it is symbolic of “racism” and must be rejected.

WBUR recently published a series of short essays about the Fourth of July specifically, one of which claimed that patriotism for many black people, “even black veterans, has always been complicated.”

The sole purpose of this essay was to drive a wedge between black Americans and white Americans, rather than emphasize the unity that should exist among a people group that, last we checked, is supposed to comprise one nation under God.

Why does the Left hate unity so much? And why does it insist upon politicizing national holidays like the Fourth while constantly fueling racial animosity? The answer is that leftists are the real white supremacists in this country who only know how to project their own ingrained racism onto others, as well as push their communist agenda onto this once-free country.

“There is no longer a Democratic Party,” wrote one Gateway Pundit commenter about the reality of the “new normal” under far-left influence. “That party was hijacked by communists and Marxists a long time ago.”