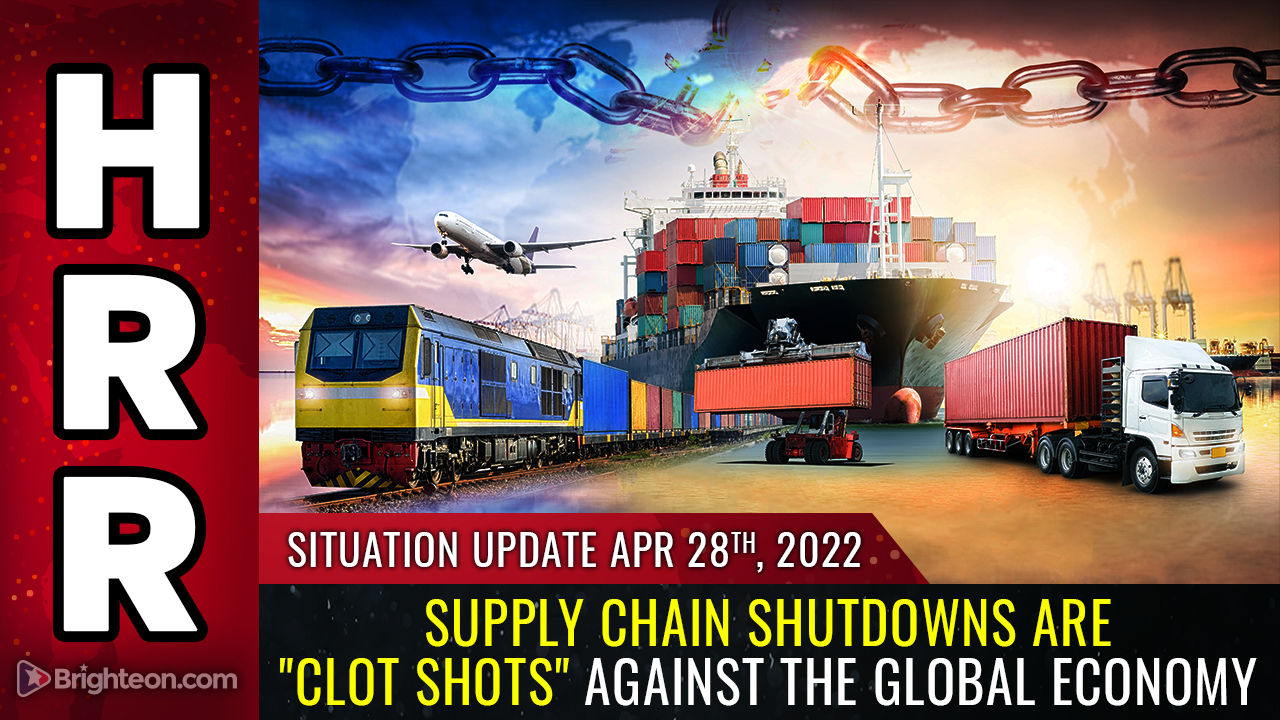 If you think of shipping containers as red blood cells, the jamming up of these containers at the locked-down ports in China is the equivalent of blood clots in the human body. For an individual or a society to survive and thrive, resources must smoothly flow and be distributed across the system. Clot shots (covid vaccines) kill people by blocking that flow, just as deliberate shutdowns of port cities creates an economic arterial blockage with devastating effects.

It’s fascinating that the globalists, in their desire to tear down human civilization and achieve mass extermination on a global scale, have resorted to the exact same practice at both the nanotechnology (biological) scale as well as the global macro scale.

China’s punishing lockdown of Shanghai is obviously contrived, but Western nations can’t condemn China for the lockdowns since they did the same thing to their own citizens. The strategic goal of these lockdowns is two-fold: 1) Eliminate political dissidents by starving them out, even if it means starving an entire building of innocent people at the same time. 2) Disrupting the supply chain of parts and materials to Western nations, wounding their economies and hampering their ability to manufacture munitions and weapons systems (which are being sent to Ukraine to fight Russia).

In doing this, China is giving the entire global economy a heart attack, and it’s not clear whether the patient will survive.

Case in point: Raytheon is now saying it can’t make any Stinger missiles until 2023, and plans for an updated design of the Stinger missile won’t even begin to be manufactured until 2027. (We would point out that America as we know it likely won’t exist by 2027, so the entire timeline is moot.) This is a screaming warning sign that America can’t manufacture weapons of war with any degree of timeliness or volume. And that means America can’t defend itself against an invasion waged by China.

Meanwhile, the International Energy Agency is calling for “climate lockdowns” to reduce fossil fuel usage, apparently realizing that since the covid lockdowns didn’t exterminate enough people or crush the economy with the desired level of carnage, they need a whole new excuse for yet more lockdowns. Some of their hare-brained suggestions include criminalizing people who drive vehicles on Sundays, which smacks of an attack against church-goers.

Is the IEA really suggesting having armed roadway checkpoints every Sunday, arresting or ticketing people who dare to drive their own private vehicles on that day? This will only jam up the roads on Saturdays and Mondays, likely causing the burning of far more fossil fuel since people will be stuck in traffic, idling their vehicles. (These climate tyrants are out-of-their-minds insane, as if they are running a kind of death cult that seeks the complete destruction of human civilization.)

I cover all these stories and much more in today’s especially entertaining Situation Update podcast, which features various impressions of libtards and left-wing lunatics trying to figure out why people keep buying plastic bags after they’re banned at grocery stores: