Why you need to be armed: Deranged Leftists now calling for mass executions of Trump supporters in public venues 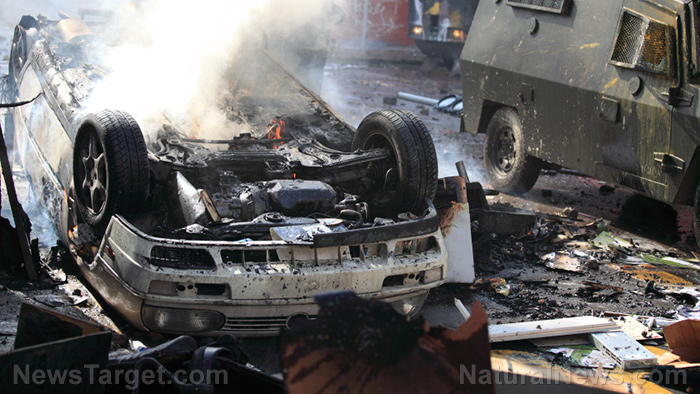 For most of President Donald Trump’s first year in office we poked fun at angry Leftists afflicted with “Trump Derangement Syndrome.”

We dismissed groups like Antifa as disparate, insignificant, and manageable. But then something happened.

All of that anger has been taken to a new level. Now, groups like Antifa, Redneck Revolt, and other Left-wing crazies are threatening to undo the social contracts that have kept American society civil and functional.

All because they believe their Trump hate gives them the right to destroy our country.

As reported by Alex Jones, founder of InfoWars, Leftists have beginning tweeting out and posting on other social media a segment of a 1960s-era movie called “The Great Escape” starring Steve McQueen in which German army officers are gunned down as they dine in a restaurant. The clip is being sent out as a ‘warning’ to supporters of POTUS Trump, conservatives, Republicans, Christians and whites in general that that is the fate awaiting them.

“This is next-level, ladies and gentlemen,” Jones said, noting that the threats are far beyond anything that Leftists have made in the past and far beyond what the propaganda “establishment” media has done in terms of fake news.

Jones also featured a tweet from a user named M.S. Bellows, Jr. as a sample of what’s being sent out over social media (without being banned, by the way):

“I got asked to leave” is nuthin’. Here’s how Trump Administration officials will be treated at restaurants if we don’t stop them now. They should thank us

That is obviously a reference to White House spokeswoman Sarah Huckabee Sanders being asked to leave the Red Hen restaurant in Lexington, Va., over the weekend. Oh, and to Trump supporters being Nazis.

This is no longer a laughing matter. It’s gotten way past the point of empty rhetoric: These people are openly threatening the lives of serving Cabinet members and perhaps even POTUS Trump himself and his family.

Left-wing violence is next

From unhinged, whack-job “entertainers” to equally insane Democratic lawmakers and media types have ginned up so much anger at the administration for more than a year — and yet Trump has survived and the country as thrived.

All that success is driving them crazy. Crazy enough to act out their rage. (Related: Writing on the wall: More see VIOLENCE ahead as unhinged LEFT calls for confronting Trump, staff.)

Speaking of the deranged media, more far-Left writers are beginning to use their platforms to dog whistle angry Leftist supporters into committing acts of deadly violence. Hamilton Nolan writes at a website owned by Univision Communications, he suggests the next phase of Trump “resistance” be elevated to the level of domestic terrorism.

In his piece, titled “This Is Just The Beginning,” he writes, “This is all going to get more extreme. And it should,” adding that Trump administration officials should not be permitted “to live their lives in peace.”

“Read a f**king history book. Read a recent history book. The U.S. had thousands of domestic bombings per year in the early 1970s,” he adds.

“The day will come, sooner than you all think, when Trump administration officials will look back fondly on the time when all they had to worry about was getting hollered at at a Mexican restaurant. When you aggressively f**k with people’s lives, you should not be surprised when they decide to f**k with yours.”

Enforcing our laws is not effing with people, especially those who have been testing the limits of American patience and law enforcement for decades. The difference now is we have a president who is willing to fulfill his sworn duties and defend our country.

The Left has figured out that James Comey, Robert Mueller, Hillary Clinton, Rod Rosenstein, and the ballot box are not going to “get rid of” the president. So they are going to resort to violence next.