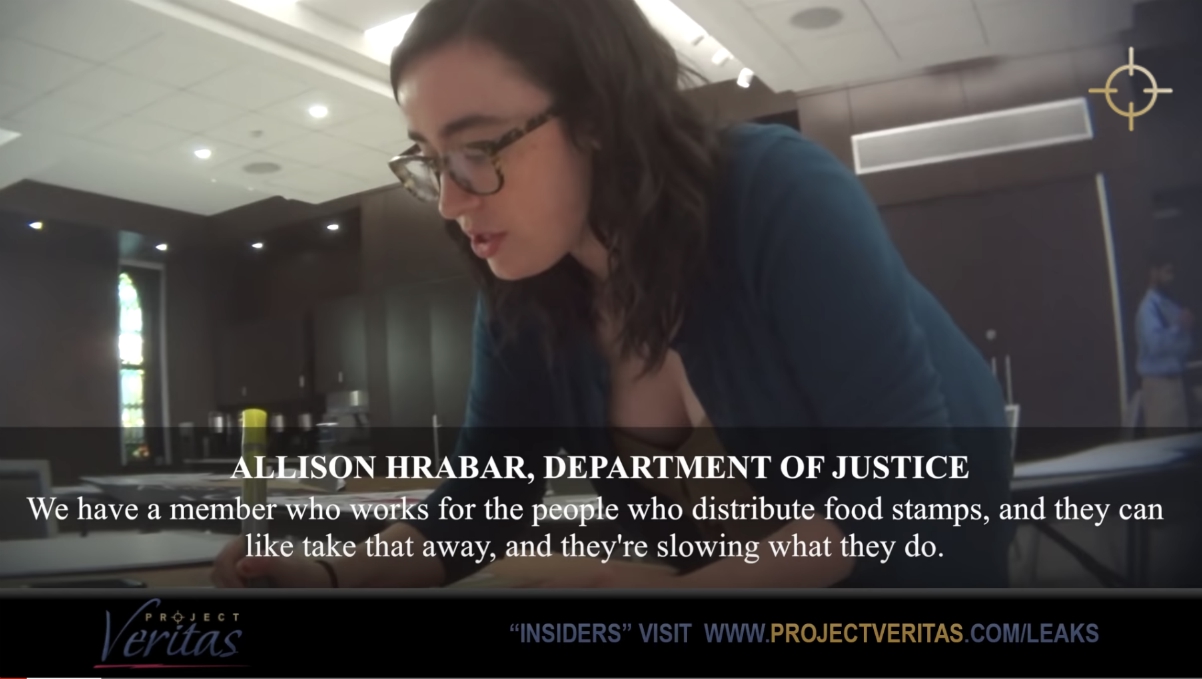 In the second of a series of videos exposing the Deep State, DoJ paralegal Allison Hrabar is seen discussing how she uses government software and computers to push her socialist agenda and to punish those she does not agree with politically.

In addition, Project Veritas noted on its website, Jessica Schubel, the former chief of staff for the Centers for Medicare and Medicaid Services during the Obama administration, is also featured in this second video.

“Both Schubel and Hrabar make admissions revealing that federal employees appear to be using their positions inside our government to resist or slow the Trump administration’s policies,” Project Veritas reports. “It appears some laws have been broken in the process.”

Astute readers may recall Hrabar’s name. She’s a member of the Democratic Socialists of America (Metro DC chapter) and was seen recently harassing Department of Homeland Security Secretary Kirstjen Nielson in a D.C.-area restaurant – an action for which she was not punished. (Related: UNREAL: Member of Marxist mob who chased DHS Secretary Nielsen out of DC restaurant WORKS for DOJ.)

In the video, Schubel, now a senior policy analyst at the Left-leaning Center on Budget and Policy Priorities, openly admits that “…there’s like a little resistance movement” inside the federal government, while telling the Project Veritas undercover journalist that friends of hers at the Department of Health and Human Services “give [her] information” before it is released officially.

“And then you were able to write about that…” the PV journalist says.

“Is it illegal to receive it,” asks the undercover reporter.

‘There’s a lot of talk about how we can resist’

The former chief of staff then said some of the materials that were sent to her by associates were confidential, which allowed her to then prepare responses to government initiatives that had yet to be formally announced.

“So, [your friend at HHS] sent you like what the administration was about to do…what’s so illegal about it? Just because you could write an article earlier than you otherwise could?” the PV journalist said, thereby giving her a chance to spin the initiative in a negative light.

As for Hrabar, she admits in the video that a number of federal employees are using whatever powers they have to ‘resist’ POTUS Donald Trump. She says “…there’s a lot of talk about how we can, like, resist from inside” the Department of Justice.

She then talks about a fellow federal worker and member of the DSA who works for the Department of Agriculture and who is “slowing what they do” so that people can remain on food stamps longer.

“We have a member who works for the people who distribute food stamps, and they can like take that away, and they’re slowing what they do… what they’re doing means that people are going to be able to stay on food stamps for another month or two, which is like really important,” Hrabar said.

In April Hrabar led a DSA protest at the home of D.C. lobbyist Jeremy Wiley; she talked about how she managed to obtain his address, a potentially criminal act.

“And so, we ran the license plate and it was a car registered to Jeremy Wiley, so you have his car parked outside a house that he does own,” she said.

When the PV journalist asked about running plates, Hrabar said, federal employees can, but “we cannot do it officially.”

After the video went public and PV lawyers filed complaints with the Justice Department and HHS, DoJ said through a spokesperson, “These allegations are deeply concerning. Department policy prohibits misuse of government resources to advance personal interests. We are looking into this immediately and have referred this matter to the Inspector General as well.”